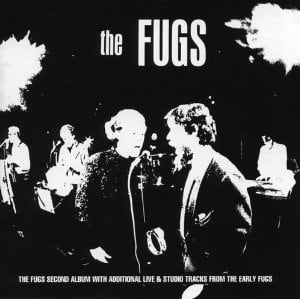 In the mid-‘60s, Bernard Stollman started a small record label called ESP-Disk. It was a venture that he hoped would shine some light on the outcasts of the New York music scene. After all, this was a time when the Beatles had just arrived in the States and Bob Dylan was slowly shifting his sound from early folk offerings into new electric territory; Stollman envisioned his label as a safe haven for the avant-garde musician-a place of creative freedom that would run contrary to the popular American music scene of the time. With that creative vision in mind, ESP-Disk put out a reissued debut record from underground garage rockers the Fugs in 1966. With a fortuitous relationship in place, the Fugs – led by Beat-era poets Ed Sanders and Tuli Kupferberg – set to work on their sophomore release, a record that would become The Fugs or, more commonly, The Fugs Second Album. Primal, dirty and filled with stylistic experiments, it’s a revelatory piece of underground rock history.

Like a strange brew of Them, Frank Zappa and the Kinks, The Fugs kicks off with guttural chants and a matching bass line before breaking into the bluesy-shuffle of “Frenzy.” It sets the tone for what’s to follow: a record rooted in some sort of caveman primitiveness, as if beatniks stumbled upon these instruments, like apes finding the black slab in 2001: A Space Odyssey, and started pounding away on them in hopes of finding a melody. Like the records from the previously mentioned Zappa, The Fugs occupies an intriguing territory between satire, pastiche and seriousness. “I Want To Know” is musically indebted to the goofy flower-power era, with its chiming bells and whimsical backing vocals, but the dark, drug-influenced lyricism provides an uncomfortable contrast: “We drink/ Or break open our veins/ Solely to know/ Solely to know,” they recite before drifting off without ever concluding the thought.

Then, just when you think things can’t get any stranger, they hit you with the 11-minute “Virgin Forest,” a sprawling anticipation of early ‘70s prog-rock that delves into mystical imagery before the whole band just starts gobbling like turkeys for some reason. It’s grating, strange and stupid, but totally compelling. In many ways, it’s a lengthy encapsulation of the appeal of the album as a whole. There’s a blatant indulgence throughout the record that’s exemplified on its 11-minute centerpiece, and it’s precisely that indulgence, that dedicated “fuck it” attitude that makes The Fugs a glorious record. Today, it should be held up as a testament to a seemingly dated way of doing business, to letting bands stretch their legs, fuck around and see what happens. Without a hands-off label, something this idiosyncratic, frenzied and downright masochistic could never have existed. With lo-fi psychedelic rock once again on the upswing, and with more and more bands seeking to self-record and distribute their grungy garage-rock records, reviving the cult-like status of The Fugs Second Album and the beatnik mission statement of the ESP-Disk label could serve as a history lesson in the barebones ethics of rock ‘n’ roll: sex, drugs, distorted guitars and a twisted sense of humour.

If you wanted to be particularly cynical, you could say that Caitlin Moran’s How to Be a W…