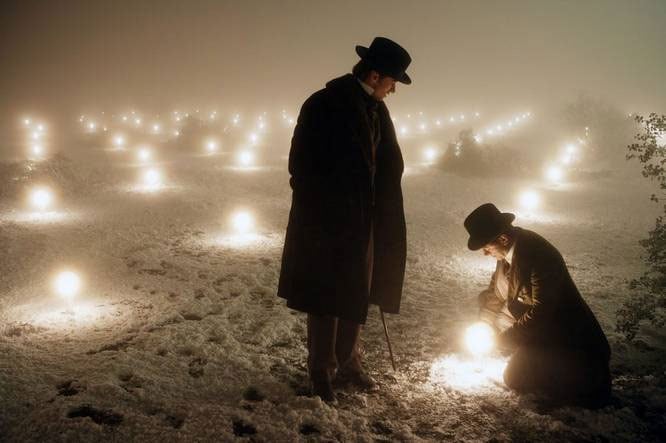 Christopher Nolan’s films entertain viewers with their well-dressed neo-noir style and narrative complexity, but below the surface they’re also about creation – often at the mercy of near self-destructive obsession. Just as a brief sampling, Memento’s Leonard Shelby writes a story to himself as part of his quest for revenge, Insomnia’s Will Dormer devises an elaborate lie after making a grave mistake and even the Batman films are all about creating an enduring symbol of order in the face of meaningless chaos. The Prestige is no different.

One of three magician-based movies to come out in 2006, The Prestige follows a pair of virtuosos who start out as audience plants for a veteran spellcaster. Hugh Jackman plays Robert Angier, a sophisticate who exudes charisma on stage even when his tricks are old hat. Christian Bale is Alfred Borden, a technical genius who lacks stage presence. The pair could have collaborated on the greatest magical act known to people who wear top hats and gigantic dresses, but a trick gone deadly causes the two to become bitter rivals. As such, they begin sabotaging one another’s performances with near-career-ending results – an eviscerated bird here, a broken leg there and a couple fingers blown off for good measure.

What distinguishes The Prestige’s take on Nolan’s filmography-wide thematic interests is its focus, where the act of creating effective magic tricks serves as a pointed metaphor for making movies themselves. It’s incredibly easy to recast Borden and Angier as aspiring filmmakers who we meet working as assistant directors for a more seasoned pro – one who aspires to be the next Kubrick and the other a Brett Ratner who knows how to make people like him enough to give him a job. Even Michael Caine’s sage-like character divides a magic trick into three acts, just like a screenplay.

Rivalry is a situation many creative people struggle with. Angier seeks the genius of Nikola Tesla to replicate an invention Tesla supposedly made for Borden. To underscore the duality of performance and creativity, Tesla is played by David Bowie, a living example of the two combined whose casting is so thematically appropriate that his eyes are two different colors. The real-life Tesla was, of course, a genius way ahead of his time and himself engaged in a rivalry with Thomas Edison.

You see, Nolan and co-writer Jonathan Nolan walk a fine line in viewer identification, letting us favor one magician over the other in individual scenes – often depending on who’s being victimized at a given time- but not offering a definitive answer to who’s really justified in the end. Instead, the point is that as their rivalry continues it grows increasingly complex, starting as a simple disagreement leading to petty sabotage and then building to scenarios with red herrings – all as a narrative magic trick played on the viewer.

It may seem needlessly complicated, but that’s ultimately one of Nolan’s main points: movies are magic and like any magic trick, the sum effort of a movie is to get a reaction from the audience. Even though we know that films aren’t “real,” they are constructed to make us believe them; a great movie will make us forget we’re watching a movie. Interestingly, Nolan approaches the idea of cinematic trickery in Inception from another angle, where a director’s textured dream worlds are constantly threatened by his own thematic obsessions. He’s clearly aware that creative people can subconsciously sink their own efforts.

Also like any magic trick, knowing the outcome softens the impact on repeat viewings. The Prestige, like Memento before it, is one of those films where you can never replicate the experience of seeing it the first time as long as you remember the twist. Thankfully the twist isn’t all that The Prestige has going for it, as the Nolans have put together a fairly meaty film with themes and ideas that make the big lead-up rewatchable, even if you know the trick that is being played on you.