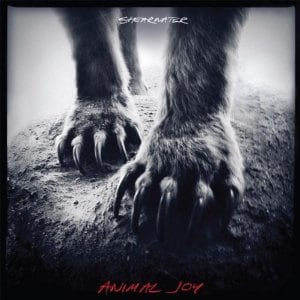 [xrr rating=4.25/5]After three records of muted insularity (Palo Santo), explorations taken on the wing (Rook) and heady island-hopping over open water (Golden Archipelago), it was about time Shearwater got in touch with its baser impulses. The loosely unified “Island Arc” trilogy put to bed like a grim and intricate yet surprisingly brilliant fairy tale, the Texas-based trio led by Jonathan Meiburg (percussionist Thor Harris and bassist Kim Burke backing him) was in need of a change of pace, musically speaking. Whether the hurried Animal Joy embodies such a departure, or is just the appendix or final extension of a running focus, is matter for debate, but what it is – shimmering and raw, full and biting – is in any case remarkable, and a big deal for a group that began as an outlet primarily for softer output from Meiburg and onetime Shearwater member Will Sheff that didn’t have a home on records put out during their joint stint in Okkervil River.

Meiburg doesn’t waste much time in establishing Animal Joy’s essential thesis, embedding it in the album’s opener “Animal Life,” a plucky build-up number that begins with Meiburg’s familiar falsetto gently skipping in step with piano and ends with a wild turn from the band seeking, as made clear by increasingly unhinged progression, “The half-remembered wild interior/ Of an animal life.” Set against simple bass-and-guitar arrangements at first, then unpacking slight lyrical variations, a metronome rhythm and the full sound the band has been mapping out since 2008’s Rook, Meiburg’s vocal spread eventually overwhelms the mix entirely, becoming itself another instrument as “Pacing down the balance beam/ Of half-remembered holidays” the tune proceeds in “Chasing down an anodyne/ And half-reflected radiance/ To hide below the ancient barricade/ In chambers like the rooms a swallow made.” It’s a breathtaking intro, doubled up on in follow-up “Breaking the Yearlings,” unofficial sequel and twin to Golden Archipelago’s similarly limb-shaking “Landscape at Speed” (although set side by side the former’s monolithic, crushingly rock-and-roll hammer falls would smash the faintly glowing build of the latter), its angular chords throwing up mist and foam like waves crashing on jagged rocks while Meiburg is caught “watching the flood stage rise” when “The weather rolls until it’s on you and suddenly breaks.”

Not to be outdone, third track “Dread Sovereign” combines the sense of impending doom with a stripped-down and bluesy intimacy, with Meiburg’s discomfiting lament, “I know I look quieter than I feel” juxtaposed against rolling guitar licks, handclaps and tight percussive accompaniment that expands to include a ploddingly fuzzy bass line and spectral backing vocals. The gentle urgings and manic pace of “You as You Were,” its insistent piano lines and Meiburg’s vocals echoing possibility and also the past’s anchors, provides contrast to the determinism and scratching strength of the first three tracks. This “electric charge of a change in the weather” gives much-needed openness to the album so far, allowing for space where “You could run in the blood of the sun’s hard rays/ You could drive the mountains down into the bay” before giving way to the shuffling “Insolence,” all percussion brushes, popping snare and the confines of living “All your life inside a chrysalis writhing” until it shifts in tone about two-thirds through, guitar breaking out from the melee. The remainder of the album’s middle lacks the inspired mastery of the first half, though the immediate urgency and highly personal ruminations of “Immaculate” and the portrait of life “pinned inside of a photograph” on “Open Your Houses (Basilisk)” take a shot at the same insouciant, literary rawness. And the atmospheric squall of “Pushing the River,” that falls apart in taps and miniaturized percussive endings, resurrects Animal Joy’s momentum, its elements crowding against Meiburg until with a vocal flourish they are wiped away and dissipate into faintly whispering keys, eventually returning in force with hopping bass and squealing guitar peeled off and tossed into the mix.

But it’s really in the album’s two-track outro that Animal Joy redeems itself. Barest feedback leading into “Believing Makes It Easy,” its catchy, easygoing theme rises and falls like gradually shortening breaths until the life of the tune is strangled away by shakers and reverberating guitar. Meiburg almost directly references the heavy-hearted morass preceding it with, “Now that we have pulled away/ Is it better on the inside?” Never answering, he only feels confident enough to say of our common humanity, “The stars have aligned with a light/ That irradiates all of us.” The band is in finest form on the album’s closer, however, beginning quiet, dim and distant before pulling close, tearing like a tiger, most handsome when it’s after food, through sparse brush and dusty lowlands. Spiraling outward in piano, fading vocals and harp washes, Shearwater leaves behind “the shining world” that “believes that inside of days/ The darkness of our lives/ Will meet the star of the age.” Whether “charging down the maw of the ocean,” “cast away like dogs from the shelter” or making “murmurs in the dark confessional,” for Shearwater Animal Joy represents a turning inward toward (or pulling inside-out of) its more primal instincts, an unleashing of the expansive controlled burns of past records as well as an examination of the indefinable nature of the heart and the body’s ancient motivations. Engaging and impressive, to comprehend its unbridled exhilaration is to witness the efforts of a band clawing desperately at something larger than itself, and nearly reaching it.