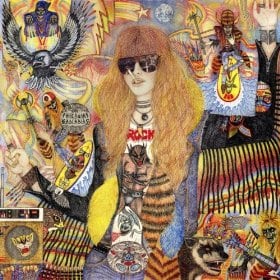 [xrr rating=2.0/5]Jennifer Herrema will not die. She has been making sweaty matted-to-your-face-hair rock since she was 16 years old. Since then she has helped build Drag City and Domino Records from the ground up. To the surprise of her fans, her newest project Black Bananas is very much so the sound of the commercial-now. Laced with keyboards, processed vocals and bass synthesizer, Black Bananas combines straightforward arena rock sensibilities with all the frills of cheap electro, the kind that Whitesnake and Poison only fetishized. Black Bananas, which takes its name from a song of the same title from RTX (Herrema’s grunge-glam project that formed after the demise of Royal Trux), retains the RTX line-up consisting of Brian McKinley, Kurt Midness, Jaimo Welch and Nadav Eisenman. This departure from RTX proper, possibly only as a one-off album, obsessively deemed Rad Times Xpress IV is marked by party sirens, funkadelic bass lines and lyrics about future lust and weed.

The RTX boys and Jennifer Herrema as Black Bananas are still very much a loud bar experience. They’ve got the Marc Bolan flavored scuzz and Iggy Pop psychosis still intact. Herrema at 39 has cleaned up a bit since stopping her last RTX tour short while on the road due to depression, anxiety and substance abuse. Her salty personality is still the face of both the music and the band but this time in an overtly commercialized way. On “Acid Song” and “It’s Cool” she is the absolute caricature of her previous incarnations, including Royal Trux. It’s her world and everything’s a haze. She’s so much an outsider that she’s in and sonically this time her rasp is produced expertly. The glammy musicality too, is equally treated with fortified compression. This is to say that with all the leather, the black shades and the reverb monsoon, Black Bananas seems to be a way for Herrema to explore other tricks of the trade without distracting the trajectory of RTX. And so RTX IV feels less like a new band with a debut album and more like a party mask for the RTX crew to wear and misbehave in without dealing with consequences that the press or their fans might peg them with. You can’t go pop necessarily, and piss people off if you don’t really mean it.

Rad Times Xpress IV is well put together despite its blending of the seemingly disparate. The 13 tracks drip Herrema’s cock rock without the cock attitude and if you can forget how cheesy the constant soloing is RTX IV can be fun. Herrema’s bravado too, is especially effective when she wears her influences on her sleeves (see the Black Bananas Rolling Stones cover of “Before They Make Me Run” featuring Kurt Vile promoting the release of Rad Times IV). Black Bananas’ survey of glam rock and trash metal is highly stylized, fearlessly embracing the glittery character of synthesizers. For instance, “TV Trouble” is like Goldfrapp’s “White Horse” and Aerosmith’s “Eat the Rich” meeting at a pinball arcade. “RTX Go-Go” recalls the decadence of Marilyn Manson’s “I Don’t Like the Drugs (But the Drugs Like Me)” with all the boldness of the contemporary Auto-Tune abuse of pop radio hits. The rest of Rad Times is equally over the top. “Earthquake” sounds as though it was recorded in an arena with a Spinal Tap sized drum kit equipped with loads of toms, at least six different custom cymbals and a kick drum with the diameter of a trampoline. Whether it was executed in post or not, this hyperbolic rock dream was executed intently.

Listening to Black Bananas’ Rad Times Express IV is good for a few things: mowing the lawn, drinking a morning beer to get over a whiskey hangover and driving to the REO Speedwagon reunion show in Las Vegas during sundown with the top down.