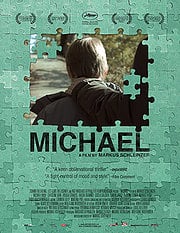 [xrr rating=1.5/5]Markus Schleinzer doesn’t waste much time in letting the audience know that the titular character of Michael (Michael Fuith) is a pedophile keeping a 10-year-old locked in his basement. One could argue this represents a certain lack of storytelling polish from this director on his first feature, but there’s a certain necessity to the structure. Poor Fuith looks like the placeholder photo on sex offender registries, a balding, bespectacled, meek man who makes Stanley Tucci’s leering character in The Lovely Bones look subtle. To even try to string out the “mystery” of this mild-mannered man’s secret would border on the insulting.

As quickly as the director reveals this horrible, self-evident truth, though, it would be wrong to say he gets to the point. No, Michael spends its 90 minutes tediously watching over the life of this pedophile and the uneasy relationship that has formed between him and his captive prey, Wolfgang (David Rauchenberger) with a detachment that borders on indifference. In a press kit interview, Schleinzer repeatedly stresses his desire to avoid sensationalizing the story of a domestic monster. Instead, in avoiding the usual pitfalls of exploitation that dot these sorts of films, the filmmaker fails to say anything.

Schleinzer worked as a casting director for Michael Haneke, and he even found and coached the children in the deeply unnerving The White Ribbon. Schleinzer clearly wanted to ape some of Haneke’s ability for uncluttered, static frames, but the long takes of Michael utterly lack the depths of unease Haneke can conjure so effortlessly. That may be Schleinzer’s point, though: he repeats shots, such as that steel blue door being ominously shut and bolted each night, until they become routine, emphasizing the warped normalcy of Michael’s life as he sees it.

But this raises a question: if Michael purges the story of a kidnapper and molester of its inherent shock, is it any less exploitative for inviting the audience to view his actions without emotion? Schleinzer thinks he’s humanizing the child rapist, but he strips his movie of any insight. Instead, he languishes in his grim realism, cutting just enough to protect himself from outrage but not engaging with the subject in any meaningful capacity. The film is so bereft of any impact that I began to be sickened by how sickened I wasn’t by the elided-over rape.

A few touches betray a certain amount of invention. By keeping the camera generally far from the action, Schleinzer can give the impression that he is filming everything around Michael, only for the true limits of the frame to be revealed with some macabre gags that come out of nowhere. There are also sinister moments, such as Michael heading out deep into the woods one evening to preemptively dig a grave for Wolfgang when the boy becomes sick, suggesting this is not the first time he’s had to dispose of a body. For the most part, however, Schleinzer stresses over and over that the worst among us are those we least suspect, a cliché in its own right at this point, and one the director does not examine with any fresh revelations.

So evil, indeed, is banal. Unfortunately, there’s nothing in the whole of Michael that makes this point with half the panache, mood and even dark wit of the five minutes spent in the killer’s basement in David Fincher’s recent adaptation of The Girl with the Dragon Tattoo. Even the use of “Orinoco Flow” proves simultaneously funnier and more chilling than the on-the-nose singing of “Silent Night” in a Christmas scene here. But if Michael reminds me of any film in particular, it’s Sam Mendes’ Jarhead. Both films take provocative subject matter and separate their objective elements from garishly vicarious thrills, and both result in interminable exercises in empty artistic posturing. They serve as advertisements for the value of being offended by unseemly topics. To be offended is, in some cases, to be implicated in what is being shown, something Haneke knows innately, and from whom Schleinzer obviously still has a lot to learn.

Burroughs’ novel presents a grotesque world of surreal terrors for Cronenberg to explore, …