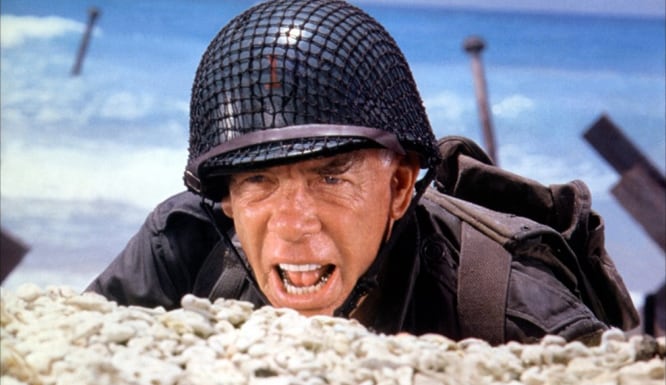 The Big Red One may be Samuel Fuller’s quintessential film, but it could also be the director’s most atypical one. Free of the shackles that kept the subversive nature of his earlier output in the realm of innuendo, The Big Red One is Fuller unbridled: bursting at its seams with blood, guts, profanity and sexuality. In what other Fuller film can you see Lee Marvin shout the word “pussy” while a spread-eagled French girl is giving birth in the cockpit of a tank or casually toss aside the blown-off testicle of one his troops, assuaging the young man that at least he still has his cock intact?

Though released in a severely truncated form in 1980 (and reconstructed in 2004 by the film critic Richard Schickel to a 162 minute runtime), the idea for The Big Red One had been kicking around in Fuller’s noggin since the late ‘50s. Based on Fuller’s own adventures serving in the First Infantry Division during the second World War, he wrote a version of the script in 1958 at the request of Warner Bros. Fuller claimed that script was never made into a movie because he didn’t want John Wayne to star in it. However, Fuller also refused to pare down his 178 page screenplay, leading to a stalemate with the studio. The Big Red One would sit on the shelf for nearly 20 years.

The ‘70s were an unkind decade to Fuller and in a reversal of fortune, Peter Bogdanovich offered to produce The Big Red One in 1976. New studio Lorimar agreed to finance the film but when Fuller’s budget swelled to $9 million, Lorimar got cold feet and pulled the plug. Only when veteran producer Gene Corman replaced Bogdanovich and convinced Fuller to pass on filming on location in Tunisia, Sicily and France and use Israel as a stand-in did Lorimar agree to pony up the cash. 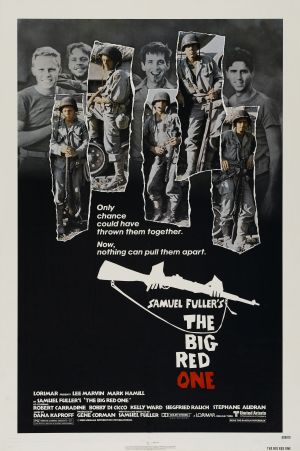 The Big Red One begins with a black and white prologue during World War I where the Sergeant (Lee Marvin) kills a surrendering German, unaware that the war had ended a few hours before. We flash forward 25 years and Marvin’s character is leading a group of young man into battle against the Vichy French in Northern Africa. This group of five is the core that Fuller leads through his picaresque odyssey of his World War II. Acting as the director’s analogue, Robert Carradine plays Zab, the cigar-chomping narrator who aspires to be a writer. Mark Hamill, on furlough from Star Wars plays the violence-averse Griff (a name recycled from Fuller’s earlier films Fixed Bayonets! and The Naked Kiss). Rounding out the group is the hemorrhoidal farm boy Johnson (Kelly Ward) and the salty Vinci (Bobby Di Cicco).

While The Big Red One retains the essence of Fuller’s earlier war pictures, it is also more abstract and impressionistic. Carradine’s narration deals more with internal emotion than acts as a guiding hand to propel the narrative. Gone are the newsreels and maps to guide us through the war, replaced by scenes that congeal thematically rather than by propulsive narrative as we follow Marvin and his cadre of young dogfaces from the scramble of the Kasserine Pass to bloody shores of Normandy to the misty disaster of the Hürtgen Forest. Fuller’s soldiers in The Big Red One sound like and use the language of real soldiers, a far cry from the sloganeering and cutout lines from his earlier efforts. The actors also give fairly restrained performances when compared to the overacting rife in his earlier efforts. Marvin, a WWII veteran himself, is a natural as the hardened sergeant, a role that Fuller claimed that the actor took to “like a hooker in a brothel.” Marvin may have been Hollywood’s ultimate badass, but he also brings a rumpled humanity to his role that makes the character impossible to dislike. Carradine’s narration is wry and pungent, and Fuller uses discretion when to use it. While storming the beaches at Normandy, the soldiers attempt to attack the Germans using a 50-foot dynamite tube. However, they must assemble this apparatus while receiving fire from the enemy. “I’d love to meet the asshole who invented it,” Zab’s voice interjects, fitting the absurdist, yet realistic tone of the film.

The Big Red One is one of the first war films to really focus on the fraternity of the men who fought in World War II. Fuller introduces new characters and then quickly dispatches them as the five leads hang tight as one banded unit. Fuller isn’t interested in writing full-bodied characters and none of the five really reaches any sort of epiphany during the film’s runtime. War sucks and they know it from the beginning. When Griff finally snaps as the unit liberates the Falkenau concentration camp towards the film’s end, his breakdown is undercut by a soft one-liner by Marvin.

More than anything, The Big Red One lets a maverick director truly allow his freak flag to fly, untethered by the restrictive studio system of the ‘50s and early ‘60s. There are some downright strange moments in the film. Fuller revisits the same ground as Shock Corridor when the troops liberate a mental institution, this time mixing war with bedlam, making the not-so-subtle point that perhaps they are the same exact thing. And that birthing scene inside the belly of the tank is as odd as it is comical.

By the time Fuller finished shooting The Big Red One, the film came in at a purported four and a half hours (by Fuller’s estimate – it was likely just three hours). Lorimar took the film away from the director and sliced it down to 120 minutes. Despite a successful debut at Cannes in 1980 and good reviews, The Big Red One earned a paltry $2.3 million, leading to the bankruptcy of Lorimar. Fuller would die in 1997, never realizing the full version of his dream.

In 2004, Time critic Schickel, along with an army of film experts, added about an hour of footage back, creating a version of The Big Red One that better matched Fuller’s original vision. However, the reconstructed edition still suffers from abrupt cuts and incomplete story arcs, problems that plague the truncated version. Hollywood was not kind to Fuller and The Big Red One debacle wasn’t even what forced the director out of the system forever. “Holy shit,” reads his autobiography as he rants that the chopped film “put a few dents” in his “resolve to pursue moviemaking in Hollywood.” The final straw was just a few years away.