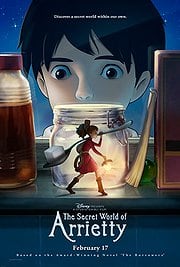 [xrr rating=2.5/5]You probably already know this, but Studio Ghibli is basically the Pixar of Japan, and not just because Pixar takes a lot of influence from Ghibli. Like Pixar movies, a new release from Hayao Miyazaki and company is a real event in cinema, even moreso because Studio Ghibli retains a traditional style of animation over CG and doesn’t release a film every year. But just like their American counterpart, and despite their track record, sometimes even Studio Ghibli puts out a film that just flat out isn’t very good.

Which brings us to the The Secret World of Arrietty.

Based on the oft-adapted children’s book The Borrowers by Mary Norton, this John Goodman-free take on the material follows Shawn, a sick boy who’s resting in his mother’s childhood home as he awaits heart surgery. Meanwhile, below the floorboards lives a small family of people about the size of action figures: Arrietty, her stoic father Pod, and her worrywart mother Homily. These tiny people are called “Borrowers,” because they live in regular-sized people’s houses and take small items that these giants won’t miss, like spare buttons, tissues and sugar cubes.

When Arrietty, on her first official “borrowing,” is accidentally seen by Shawn – a big no-no for Borrowers – problems ensue. Shawn’s illness isolates him from pretty much everyone and due to dwindling populations Arrietty hasn’t met a Borrower that wasn’t her mom or dad, so the two intrigue one another. But there are a couple obstacles between them: being seen by a human means a Borrower family has to move away or risk potential doom, Hara, the house’s crazed maid, is obsessed with catching these miniature thieves and Shawn might not be long for this world, anyway.

If that sounds pretty good, I can’t blame you – The Secret World of Arrietty possesses all the right elements for the typical magically transcendent Studio Ghibli production, but for some reason the film lacks the drive to bring any of them to any effectively dramatic extent. The divide between the human boy and the Borrower girl has some good set-up, but the follow-through doesn’t satisfy as much as the film pretends it does, as its hour-and-a-half runtime doesn’t allow much time for the exploration the story needs. Sure, there’s a bit of immediate danger as Arrietty deals with local animals that tower over her and poor Shawn overexerts himself to protect her, but it’s just not enough to make us really worry about either of them. Eventually Hara comes out as a pseudo-villain of the story, but the film can’t decide if she’s a real danger to the Borrowers or just a kooky old nuisance; moreover, she has barely any character motivation to explain any sort of reason for her less-than-noble intent. It feels distinctly like the filmmakers are holding back, and the result is baffling.

Of course, the dub doesn’t help. English dubbing – particularly of Japanese animation – is often embarrassing, but Disney tends to do a passable job gathering recognizable names to provide their talents. Which means that voice talent like Amy Poehler and Will Arnett bring their C-game to the thankless parent roles, and the young actors playing the kids could be swapped out with any other kid role in an American Ghibli dub. At best it’s not distracting, and at worst it makes a viewer kinda wish for a button to change the audio. I’m slightly wary of a re-watch, but I guarantee Arrietty will sound better in the original Japanese audio. Over there, the art of voice acting is generally taken more seriously.

As to be expected from a Studio Ghibli production – even one that star director Hayao Miyazaki only scripted – the animation is often gorgeous and fluid, and the character designs are typical Ghibli house style, by which I mean so cute that even the insects struggle to be off-putting. On a technical level, Arrietty is top notch feature animation that puts everything else on Earth to shame.

It’s easy to see how The Secret World of Arrietty could have been, if not a great film, at least an enjoyable, somewhat slight entry in the Studio Ghibli oeuvre. They don’t make any major missteps in the film, they just don’t make enough right decisions. As a result, Arrietty feels undercooked, like a cake that hadn’t been kept in the oven long enough to rise to its potential. For a long-running studio like this, it’s fairly excusable and hardly world-shattering. With a track record as great as theirs, it’s best to write this one off as a misfire and hope they do better next time.