September 21, 2020
Home Music The Twilight Sad: No One Can Ever Know 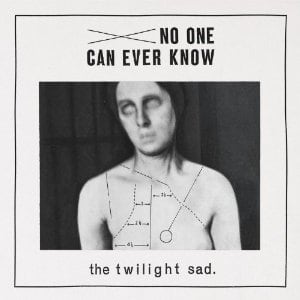 [xrr rating=3.75/5]The album’s cover art is enough to chill your already wintry bones: it’s a half-sitting portrait, half-morgue file photo of a face with pupil-less eyes, perforated lines sectioning off parts of the upper torso as if to prompt the cutter precisely where to drag the knife. To what degree this is scientific versus sadistic remains questionable. The image is composed of dead, disinterested colors and looking at it too long invites a blood drain. While it’s true that the Twilight Sad have never exactly been party people, this visual statement alone illustrates the low-lying aggressiveness and deep freeze aesthetic James Graham and his cadre of Glaswegian bandmates bring to their neo-industrial release, No One Can Ever Know.

And if the track list is any indication – “Don’t Move” and “Don’t Look at Me” punish disobedience with unknown consequences, while “Sick,” “Kill It in the Morning” and “Dead City” spell out a grim premonition that not everyone’s gonna make it out of this place unharmed – No One Can Ever Know escalates malevolent secret to bruising threat. Previous Twilight Sad albums are also possessed lyrically (though to a lesser degree) with near-homicidal bleakness, but while the “kids are on fire in the bedroom” and there’s “a knife in your chest,” as in 2007’s Fourteen Autumns and Fifteen Winters, the fright of the worst words are counterbalanced with the noise happening around them. The guitars are full and insulating, an accordion will join the mix – there is a feeling of safety in numbers provided by the squally population of the composition that both reflects and competes with Graham’s abused/abusive poetry.

In No One Can Ever Know, he has you alone. This is his intention. Having spent time absorbing the doom-rock of bands like Depeche Mode, Siouxsie and the Banshees, Cabaret Voltaire, Liars, and Nine Inch Nails, the Twilight Sad brought in producer Andrew Weatherall (best known for Primal Scream’s Screamadelica) who helped them to accomplish some reconstructive deconstruction. The result is ringing, stinging synths that isolate and percussion that emanates sometimes from man, sometimes from machine. There are the occasional metallic clangs, and while expected in a cold conception such as this, it achieves the effect of sounding accidental, heightening the sense that the surrounding space is empty enough that you can literally hear the falling-down sounds of pipe-rusted decay. He has you alone.

Graham’s brogue, always distinctive, is especially so against this starker, darker permutation of the Twilight Sad. Beyond accent, it is a dialect; Graham trills his consonants and forms his words in ways American mouths can’t move. The foreignness of it sounds like the stuff of generations-old folktales and yes, one can’t help but find it sexy. But it’s an attraction that alienates as well as pulls, which is part of what makes No One such a psychically challenging album, particularly as a female listener. When Graham vows, “I’ll find you/ Don’t worry,” in “Another Bed” or “I still watch you” in “Don’t Look at Me” (simple, harmless enough words out of context, and that is what gets scary, when the benign becomes barbed), it’s not romantic rescue he’s musing about, it’s a veiled commitment to a predatory mission of seek and destroy. “Don’t Move” repeats the phrase “Paired off in the violence,” a description that speaks to the thematic content of the album as a whole. Passion and revulsion, the easy purity of aggression, self-hating (but in his mind necessary, deserved) vengeance.

This is where it’s tidy to say that the genius of it is that we can all recognize this fucked-upness in ourselves; that it resonates. Aren’t we glad this is fantasy? It’s the kind of music that accompanies a shameful dream. But actually the power here is that it doesn’t seem altogether fictional, the uneasiness stems from its plausibility. It attacks me in a way that is not theatrical but gradual and spreading; I struggle to make out Graham’s burr-distressed words in a cross between mild panic and thrill. What this means in terms of criticism regarding the record I’m not sure. What this says about me I’m even less certain. I don’t know if that makes it great but it at least makes it remarkable. No One Can Ever Know is, if nothing else, provocative in all the ways I hope I’m never unlucky enough to experience.