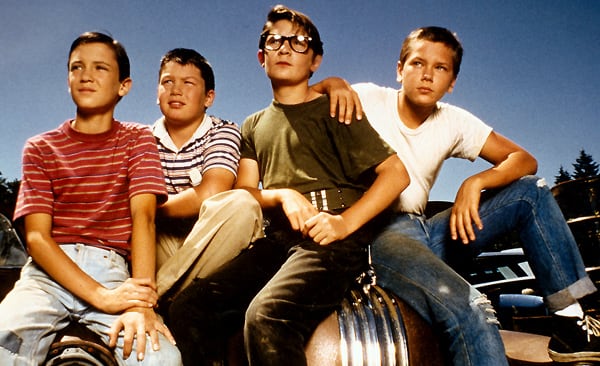 I rarely have patience for coming-of-age movies. With childhood far in the rear view, and having shaken off that pesky quarter-life crisis years ago, existential angst now tends to bore me. Nowadays, I favor retrospectives in the macro sense, more in line with Terrence Malick’s narrative-lite The Tree of Life. But as a sheltered kid growing up in a religious school, I’d always wanted to see Stand by Me, the 1986 Rob Reiner-directed adaptation of a Stephen King novella. I envied the few friends lucky enough to have seen the R-rated movie as they mimicked many of its raunchiest zingers. So going into my long overdue viewing, I didn’t know whether this iconic film would be able to crack through my cynical shell, or whether I wanted it to.

Stand by Me is bookended by “present day” scenes of Richard Dreyfuss (the full-grown Gordie, otherwise played by Wil Wheaton) reminiscing about his childhood best friend Chris (River Phoenix) after he learns of his untimely death. The bulk of the film takes place in a flashback of a memorable Labor Day weekend in 1959, when Gordie and Chris teamed up with wild child Teddy (Corey Feldman) and the overweight Vern (Jerry O’Connell) in search of a missing boy’s body and the small-town fame that would accompany its discovery. While the prolonged flashback works well enough as a framing device (much as Peter Falk’s grandfatherly bedtime story did in Reiner’s A Princess Bride), the narration becomes intrusive, often telling what the live action just showed. At one point, Dreyfuss actually interrupts to explain the workings of “your mama” jokes. While all the shifts in time can be disorienting (there are flashbacks within flashbacks and plenty of dream sequences to boot), they do work for the most part. The one glaring exception may be the non sequitur “barf-o-rama” pie-eating story Wil, an aspiring writer, tells around the campfire. But boys will be boys. 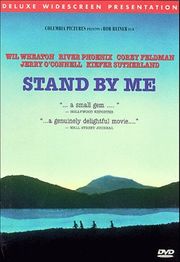 Stand By Me gets its subject matter exactly right. The boys’ jokes at each others’ expense, dangerous acts performed simply for the rush of adrenaline, the smoking, the swearing, the bursting into tears despite tough guy façades — all are spot on. As cynical as I may be, I found myself remembering a time when I could relate to Feldman as he shouts “I’m in the prime of my youth, and I’m only going to be young once!” Most of their scrapes are relatively harmless, such as running from a junkyard owner and his golden retriever “guard dog” or emerging from swamp water covered in leeches. But the boys also tempt fate by recklessly handling a loaded gun and nearly getting run down by a train (one that, for some reason, doesn’t brake for fleeing children).

In the present day, the film possesses greater poignancy as the four kid actors’ real-life fates eerily paralleled those laid out at the end. O’Connell found marital bliss, landing former-supermodel Rebecca Romijn. Feldman had an eventful childhood but ended up flaming out and getting into trouble with the law. Wheaton went on to a moderately successful albeit quiet career. And most notably, Phoenix died before his time, notoriously overdosing on the street outside a Hollywood nightclub. In many ways, the film now serves as a remembrance of Phoenix at his most vital.

While I certainly would’ve loved seeing this unsupervised adventure story when I was a thrill-seeking boy, I’m glad I first saw it at 31, when I could use the occasional reminder of what it’s like to be a kid. The story, like life, is about the journey, not the destination. As Dreyfuss narrates, “We knew exactly who we were, and exactly where we were going.” Rarely have I been able to say the same.