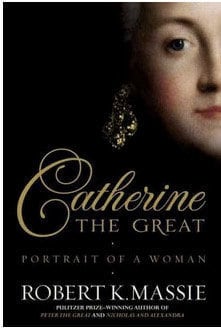 [xrr rating=3.5/5]After writing biographies about the first modern tsar of Russia (Peter the Great) and the last (Nicholas II), Robert K. Massie finally turns his attention to the pivotal figure in-between with Catherine the Great. Before Massie has even finished the first of his many brief chapters, he’s introduced a tale so engaging that the resulting 600 pages promise to fly by.

Massie has a gift for fleet-footed writing. While he routinely stops to savor details and anecdotes, the author rapidly moves through the life of Russia’s most powerful woman with a speed that matches her own trajectory. Fate suddenly smiled on Sophia Augusta Fredericka, princess of a minor German principality, when Empress Elizabeth selected her to marry her heir, the future Peter III. Her immediate thrust into a vast court brings a cavalcade of ambition, education and exasperation, and Massie magnificently captures the whirling emotions of ecstasy and (as often) despair. Russian history has always been a saga of unending abuse, but the trials to which Elizabeth subjected her nephew and his bride are so stunning that the molding of Sophia into Catherine proves more memorable than her legendary reign. Peter’s physical and psychological torment at the hands of tutors and Elizabeth’s isolation from family and the constant removal of any servant deemed too close to the royal couple recall similar stories of absolute control under Stalin. The Russian commoner has always been mistreated, but to see even tsars put to such horrid torture makes the perpetual cycle of misery in Russia’s history even more ghastly and fascinating.

The grislier revelations make up the first few sections, leading through Catherine’s harrowing, unconsummated marriage to her ascension following a coup against her feckless husband. As such, when the more educated and poised Catherine takes the throne, Massie cannot fully disguise a hint of relief for his subject. For all her accomplishments on the throne, the greatest reward might have been simply the knowledge that no one could treat her like garbage anymore. This, however, marks the spot where Massie’s biography starts to lose its focus. He lingers on odd details such as Catherine’s emotional recklessness with lovers or even the outright diversion of a semi-thorough recap of the French Revolution. Massie also includes certain passages that awkwardly play at light-hearted, such as a reminder that plastic surgery didn’t always exist to help people retain their youthful appearance. In an otherwise serious account of Catherine’s life, such attempts at levity feel like a professor clumsily trying to interest a class of bored juniors suffering through their core history course.

Likewise, his kindly teacher tone carries over into his evaluation of some of Catherine’s actions. Much ado is made about Catherine’s attempt to better the position of serfs, but even when Massie addresses the Pugachev Rebellion, he quickly moves past any slight admissions that the disastrous naïveté of her half-baked policies made life in Russia worse. This keeps with the overly sympathetic tone some historians take toward rulers who make tentative, typically detrimental steps at any level of reform, retroactively awarding gold stars for effort with barely a footnote for the devastation that effort caused.

Nevertheless, with a life as rich in deeds and intrigue as Catherine’s, even a fool could have written a compelling account of her time on this earth. But Massie is no fool; he makes a solid case for Catherine as one of the Western world’s most daring modern autocrats. And I admit, sometimes there’s a visceral thrill in this woman proving all her detractors wrong, even if Massie’s incessant framing of Catherine in gender terms has an inadvertently patronizing tone. Catherine the Great will likely, and rightly, become the de facto starting point for anyone looking to read up on the empress. What makes the book so occasionally disappointing is that it might have been the definitive text on Catherine II, period.