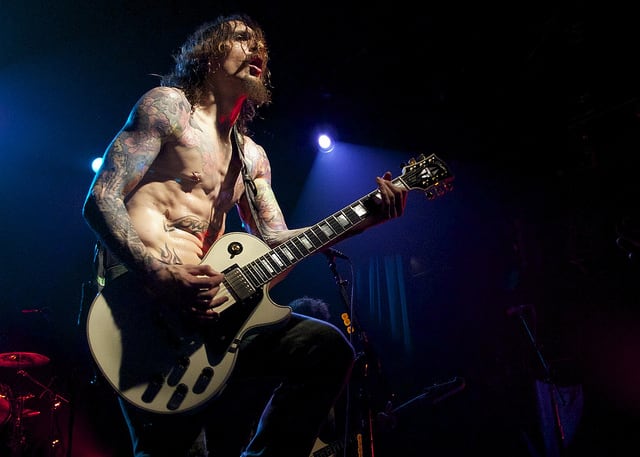 The Darkness almost missed their time. When they broke in 2003, glam was a weird, typically ignored part of rock history and listeners were in the midst of a golden era for R&B. This was the year of “Crazy in Love” and “Hey Ya!” and “Rock Your Body,” all veritable classics of that genre. Few in the mainstream talked seriously about Queen or AC/DC, yet the Darkness rocketed up the American charts, their video for “I Believe in a Thing Called Love” inexplicably, snugly nestled between the pop-punk and R&B hits of “Total Request Live.” They wrote self-evident songs like “Get Your Hands Off of My Woman, Motherfucker” and the herpes anthem “Growing on Me,” their straightforwardness and bombast comically endearing. Yet they played it straight, jumpsuits, David Mustaine hair and all. In fact, their second album, One Way Ticket To Hell… And Back! seemed–despite its ridiculous title–a bit less derivative, a more mature and KISS-influenced stab at seriousness.

So it was too bad that they broke up in 2006, just as rock musicians again dared to utter the name Freddie Mercury and just as sad that rehab broke them up. It’s equally sad that their U.S. tours were seven years apart, because they have the verve, if not the strong connections, to fill much larger venues than D.C.’s 9:30 Club. On a cold Wednesday in February, the Darkness strode onto the stage like playing one of the best American venues was, yawn, just another night in the life of English ultra-rock stars like them. They passed on the old spandex jumpsuits in favor of leather and headbands, kind of a dirtier Kings of Leon look and another shot at seriousness from the campiest rock band of the last decade.

Breaking through the monastic chorus piping through the speakers, the opening riff of “Black Shuck” cracked our eardrums. The mega-loud bass set hearts racing and by the first chorus, the crowd was echoing singer Justin Hawkins’s titular shrieks. Without pause, they accelerated into “Growing on Me” and the pace didn’t relax for the rest of the night. At any given moment, Justin or his brother Dan Hawkins, both expert guitarists, might be tossing their hair, thrusting their hips or taking flying leaps to exchange a mid-stage high five. Bassist Frankie Poullain trundled stoically around his corner of the stage as he slapped dirty, angry riffs. They pounded out a few more songs from their debut, {Permission to Land} as the crowd screamed and threw devil-horns with reckless abandon.

Twenty minutes into the set, they dashed through a breathless rendition of their newest single, “Nothing’s Gonna Stop Us.” It shares their earlier songs’ glam-metal inclinations, but in place of ceaseless falsettos, Hawkins sputters as many words of encouragement as he can over the four minute tune. Shedding his star-spangled leather vest, he then began “Get Your Hands Off of My Woman, Motherfucker” to the loudest cheers of the evening. As Dan whittled yet another noisy solo, Justin posed in a precarious handstand and allowed some guy named Gary to shriek the last “motherfucker!” of the song.

The latter half of the set laid heavily on songs from the upcoming album with few selections from their second album, including a rendition of “One Way Ticket” that featured England’s preeminent percussionist, Frankie Poullain, on cowbell and “Is It Just Me?” whose asymmetrical bridge never tripped up the fans who sang along for every word. Around the 75-minute mark, they played their trump card, the single that made them famous and that filled the venue that night. “I Believe In a Thing Called Love” was flushed and panting, its highest notes downright intergalactic. After another quick costume change, they reemerged for an extended version of “Love on the Rocks With No Ice.” And I do mean extended: it clocked in close to 20 minutes.

Though they’re hilarious and campy, I genuinely like that about the Darkness. The Hawkins brothers braid their fluent guitar lines with Poullain’s rhythms. They seem earnest students of their instruments and their lyrics are much too proficient in extended metaphor, innuendo and party rhetoric to be serious. For God’s sake, just before Justin’s first costume change, they sang a new song called “Everybody Have a Good Time” whose chorus offered just that suggestion.

“Do the Darkness take themselves seriously?” When my friend posed this question, Justin Hawkins was alone on stage, wearing a Mad Hatter-style top hat and star-spangled leather pants–no shirt–and strumming an acoustic guitar as he sang his band’s only ballad. I thought the answer was obvious, but from the cheers to the dancing to the fists pumping in earnest, their intention seems immaterial. Fans take the Darkness very seriously and when a crowd is that into a band, everybody has a good time.