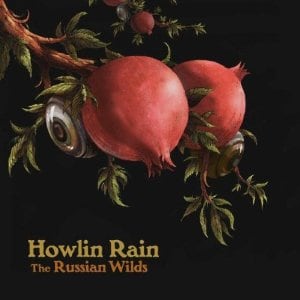 [xrr rating=3.0/5]If The Russian Wilds is your first encounter with Howlin’ Rain, you’ll be forgiven for thinking that you’ve accidentally stumbled into a DeLorean and found yourself transported to the late ‘70s and early ‘80s, when leather pants and guitar solos were in abundance. After all, the band’s been dedicated to an aesthetic that unabashedly borrows, steals and downright pillages from the pages of classic rock since the release of their self-titled debut; an aesthetic of endless hooks, glam-rock indulgence and rotating band member solos. Though mostly noted as a side project for Comets on Fire guitarist Ethan Miller, the band’s sound has managed to stay grounded and focused despite the revolving door of band members, while also growing more intricate and nuanced over the span of three records. On this year’s release, the first full-length since 2008’s Magnificent Fiend, Miller has once again hooked up with a slew of new band members, not to mention snagging Rick Rubin as a producer, and come out with another change of appearances and sounds.

Opening cut “Self Made Man” is just the kind of balls-out rocker needed to announce the return of Miller and company after an extended hiatus. With a Black Sabbath-tinged guitar lead and Miller’s howling vocal take, itself drawing off of the likes of Bad Company and Deep Purple but with an inflection all his own, the track runs a swift and menacing eight minutes. It flows with ease from pentatonic guitar riffs, to slight shades of slide guitar and the somewhat lost relic of the all-male chorus harmony. While tight and focused, it’s a track that brims with an infectious looseness; Miller sounds confident vocally and the whole band fills out the busy arrangement with the necessary flourishes.

From that track onwards, the record works as an encyclopedic patchwork of classic rock influences that bring to mind the early days of Rolling Stone magazine, Hunter Thompson and Woodstock; this is a record that’s unapologetically in the rockist camp. “Can’t Satisfy Me Now” is a soulful, Southern-fried ballad complete with cooing backing vocals, a heavy dose of organ, the cathartic release guitar solo and the necessary diction of heartbreak. It’d be easy to peg this track and much of The Russian Wilds as unoriginal or purely fueled by nostalgia, but to do so would be to deny the immense pleasures of the appropriation at work. “Cherokee Werewolf,” with its acoustic slide guitar and piercing electric guitar interjections, evokes the Wild West feel of Thin Lizzy’s “Cowboy Song,” while “Walking Through Stone” revels in amp fuzz and bouncy keys, creating an atmosphere of redemption undercut by bitterness.

Not all the genre evocations work though, especially considering the majority of the album’s tracks exceed the five and six-minute mark. “Collage” is a tedious piece of harmony-driven seriousness that doesn’t benefit from its Emerson, Lake & Palmer vibe. “Strange Thunder,” clocking in at almost nine minutes, unravels without the precision and energy that make the album opener such a standout, while “Beneath Wild Wings” suffers from an easygoing, soft-rock vibe, a distracting and inconsequential diversion from the record’s aesthetic established so carefully early on.

Though The Russian Wilds can too often be a murky pastiche, there’s an idiosyncratic charm at its core. There’s a looming sense of Gospel on tracks such as “Dark Side” and “Self Made Man.” By “Gospel,” I don’t mean to evoke the musical genre, but rather a pseudo-communal experience, one of belonging, understanding and reveling in the joy of collectivity. The problem with nostalgia is that it tends to provide more of a glossy snapshot of a previous time rather than a detailed, nuanced depiction, and the creative vision on The Russian Wilds is no different. It’s mostly a bloated caricature, but occasionally a hell of a lot of fun.