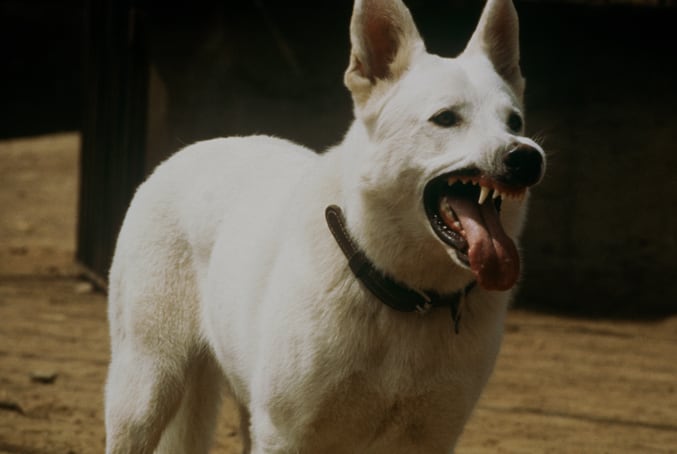 Having left filmmaking in the ‘60s, returning with the World War II set The Big Red One, it’s strange to see Samuel Fuller operating in something that resembles our modern world, a cheery, sun-drenched version of LA, with movie sets, shopping malls and conceptual hilltop houses. It’s a setting that the director exploits as masterfully as the studio-bound reveries of his earlier output, and White Dog is consequently as subversive as any of his best work, with a squeaky-clean surface flimsily masking all the usual filth. This is a film that utilizes the clunky grammar of the TV movie, with its eager young actresses, awkward acting and mugging pets, while bending it toward the director’s signature dark style.

Following a long history in B pictures, it makes sense that Fuller would experiment with what’s ostensibly the ‘80s answer to that genre. But unlike the relative anonymity of much of his older material, White Dog was met with criticism from the public and fear from its studio, which balked at the frank depiction of racism. The film ended up shelved for over a year, eventually dumped in scattered art-house release. It nearly appeared on television soon after, which would have been an appropriate outcome for its stylized movie-of-the-week style presentation, but its broadcast was successfully protested by the NAACP. It’s hard to see exactly what problem the organization had with the movie, but the overall furor is easy to understand. To this day White Dog remains unrelenting and explosive, presenting racism without any of the softening checks or tempered emotions that usually accompany the topic. 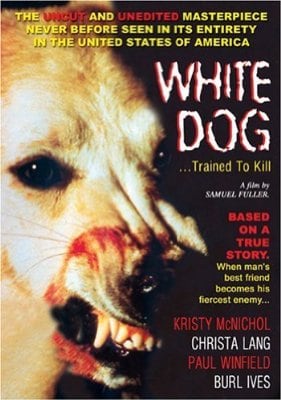 Fuller spent his entire career battling against hate in all its forms, and his symbolism here is characteristically straightforward. He had portrayed the absurdity of racism before, most notably the black patient in Shock Corridor who thinks he’s the Grand Wizard of the KKK, but the central icon here is unmatched for its clear-cut ferocity. Julie Sawyer (Kristy McNichol), a struggling actress living in the Hollywood Hills, ends up taking in the titular dog after it dashes out in front of her car. Its hate masked by an unassuming exterior, the dog’s white coat is matched by its origins, as a white attack dog turned mad by a racist owner. Beaten mercilessly by hired drunks as a pup, this normally cute representation of man’s best friend turns into a ball of hate at first sight of a black person.

It’s a bold concept, and Fuller sticks with it, clearly unafraid of pissing anyone off. The dog’s selective viciousness isn’t merely suggested, he kills several black people throughout the course of the film, each attack serving as a commentary on the broader effects of racism. One scene, which plays like a scene from a daytime-set horror movie, stands out as a specifically pointed attack on the inaction of institutions. A man sprints down suburban sidewalks with the dog on his tail, unaided by anyone, before heading for the safety of a church. Inside he finds no relief, and the dog overtakes him near the altar, spraying his blood as the camera pulls out to take in the surroundings. Fuller, never one for delicacy, ends the scene by settling on a stained glass image of Jesus, who looks on as the man is torn to shreds.

The main conflict centers on the efforts of black animal trainer Keys (Paul Winfield) whose furious obsession with deprogramming the dog becomes increasingly hopeless. The idea that Fuller develops, that trying to squash racism entirely is as pointless as pretending it doesn’t exist, is accordingly grim and daring, and helps clarify why White Dog was so unpopular upon its release. Its eventual climax, a tense Mexican standoff between the supposedly deprogrammed dog and several of its caretakers, suggests that it’s impossible to erase hate entirely, that such virulent emotions, even when quashed, will always boil up somewhere.