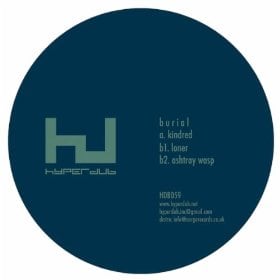 It’s been nearly six years since William Bevan unassumingly released his debut album under the Burial moniker. Less than a year later he would alter the course of modern bass music with his sophomore album, Untrue, seemingly setting the course for a career of grand gestures and media-parlayed over-exposure. Bevan, however, has yet to release a true follow-up to Untrue, instead strategizing a series of enigmatic, lateral moves through the shadowy underground of UK electronic music. With that being said, not much more than a calendar year has passed without some sort of new Burial material, though most of it has not been nearly as documented while none of it is widely available in physical formats. Perhaps as acknowledgement of his sound’s singularity or perhaps sensing the pressure to ultimately advance beyond his prior work and thus considering his next move with uncommon regard (or probably both), Bevan has dropped a series of low stakes, high reward EPs in the interim.

This is where you’ll find some of the best Burial material–his collaborative 12-inch with Four Tet from 2009 is arguably the greatest conflation imaginable of those two artist’s peerless stylistic exploits, while last year’s haunting Street Halo may have brought the Untrue aesthetic to its most logical end point–and with results this prodigious and well considered, the lack of a third full-length is beginning to feel less like a cop-out and more like a sign of artistic purity and intended longevity. Bevan’s new EP, Kindred, once and for all solidifies such notions, subtly pushing the Burial aesthetic into new territory without overplaying or brashly attempting to pivot away from the sound he helped popularize. As a document of an artist committed to his distinct creation, it’s both comforting and admirable. But more importantly, as the next step in the evolution of the Burial project, it’s as inspired in its confidence as it is unsettling in its execution.

What immediately sticks out about Kindred is Bevan’s increasingly nimble way with structure, utilizing negative space and ambiance as tools to widen the scope of his project’s inherent interiority without straining or exhausting his ideas. Kindred’s three tracks stretch to 30 minutes in length, with the two bookending pieces reaching past 11 minutes each. The expanse of past Burial tracks has typically been implied via collateral atmosphere and thematic suggestion. But Bevan’s work with Four Tet on the aforementioned Moth/Wolf Cub occasioned a liberty with the infrastructure of both artist’s stylistic schema, and Kindred represents a purposeful flowering of this nascent impulse. The record’s title-track and A-side–ostensibly the most functional of the three pieces–devolves into stark ambience on multiple occasions, further facilitating the ruminative quality familiar to Burial’s music. But rather than offered as augmentation, as in the past, it’s instead encouraged here as something approaching an ideal–particularly as the breadth of the piece manifests itself across a dynamic alternation of two-step kick and ghostly drift.

“Loner” streamlines the approach. Blanketing a surprisingly linear, house-leaning beat in nebulous effects and stylus response, Bevan folds his outlying sonics into compact resonance. It’s nice enough on its own but it functions best as the foundation for Kindred’s most flamboyant flourish: atop the headlong surge, Bevan spins out an unexpected, rave-nodding synth motif. It’s his most blatant gesture towards the genre since, well, “Raver,” and it results in Kindred’s most immediate standalone piece. Gears again shift decidedly, however, with cavernous closer “Ashtray Wasp,” which plays as nearly the inverse of “Loner.” Borne of an improvisatory spirit that up to now Bevan’s had little space to fully investigate, “Ashtray Wasp”’s oblong, intangible gait extends no thematic or sonic footholds beyond its fundamental distinction as a Burial production. This frees Bevan to tamper with spikes in energy and navigate extended sequences of swarming, industrial atmospherics. With few stable traits with which to gain traction, the listener is left to unravel individual patterns and samples, which, here as well as throughout Kindred, are chopped into syllabic refrains with little in the way of decipherable narrative or thematic release.

This series of embellishments and experiments evidence a subtle yet precise advancement of the Burial aesthetic: working to expand his stylistic purview even as they continue to insulate and crystallize the thematic thesis which defines the material. Which is to say that as beautiful as Kindred frequently is, it’s also a disquieting, downcast vision of contemporary urban displacement. The piano line which bewitchingly evolves in the last few minutes of “Ashtray Wasp” like the sun slowly searing away early morning dew belies the bleak portrait of isolation and insomnia that the preceding nine minutes so deftly sketch. It’s a contradiction that Burial’s music thrives on and a balancing act that the tense, disquieting Kindred threads to hypnotic effect across three diverse yet intimate tracks. Humanity may be digging its own grave, but for Burial, there appears to be a future beyond the void.

Grouper: The Man Who Died in His Boat