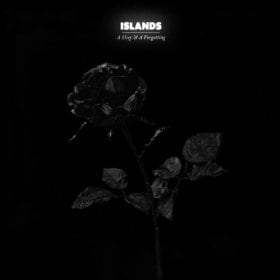 [xrr rating=2.5/5]Mapping the evolution of Nick Thorburn’s Islands may be a complicated effort, but it’s also a necessary component of being a fan of the group and Thorburn on the whole. Appearing fully formed on their debut effort Return to the Sea, a stunning release that updated and fleshed out the Unicorns’ potential with a heaping dose of symphonic ambition, Islands nonetheless faltered on their sophomore effort Arms’ Way before regaining their footing with the New Romantic-indebted Vapours. The group’s latest unsurprisingly follows in the footsteps of Islands’ doomed sophomore album, acting as a sampling of what they’ve done before and where they might soon be heading.

In this case, that means mostly ditching the synth pop of the second album in favor of dark, brooding baroque songcraft and Islands’ now trademark indie prog. The album starts with “In a Dream It Seemed Real,” a sickly sweet ’50s pop-style number that immediately brings to mind Thorburn’s recent side project Mister Heavenly. The song has some of Thorburn’s fatalist edge lurking beneath its surface, with its refrain of “I watched the city burn/In a dream it seemed real.” Where “In a Dream It Seemed Real” has just enough bitterness to counteract the sugary sweet center, the album starts losing that balance immediately after, with the MOR blandness that is “This Is Not a Song.”

Tempting as it is to view the track as a stealthy comment on the manufactured nature of adult contemporary, that might be giving Thorburn too much credit and, in any case, it’s a mediocre effort that serves as a threat for where else the album will head. “Never Go Solo,” by contrast, takes the manufactured angle in a different direction, sounding more substantial, with its antagonistic guitars and Thorburn’s vocals far more biting. Still, the album doesn’t have a stand out until the halfway point, when “Can’t Feel My Face” enters the picture, all distorted organs and irresistible shakers and handclaps. The song is vintage Thorburn, hooky and full of intriguing melodies, skirting as many different pop styles as possible.

Weirdly, “Can’t Feel My Face” is the dividing line for the album, as all but one of the tracks that follows it is sappy, maudlin and at times seemingly unfinished. Thorburn only appears to bring his A-game once more, with album closer “Same Thing.” Sounding like a track that barely missed the Vapours boat, “Same Thing” builds around a simple but effective broken drum machine beat, layers gently building on layers as Thorburn proclaims, “I can’t wait to see/What becomes of me.” A Sleep & A Forgetting may be a concept album about sleep, but that’s no excuse for making so much of it sleep inducing, particularly when “Can’t Feel My Face” and “Same Thing” clearly show that Thorburn hasn’t lost it, he’s just holding back. But this being Islands, we shouldn’t be worried, it merely means the next album will be the one worth listening to.