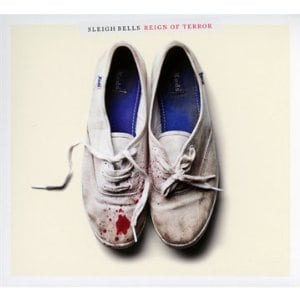 Sleigh Bells drops on you with the fun-loving velocity of a cartoon anvil. Together on their debut, the (excellently) giddy migraine that was 2010’s Treats, songwriter/guitarist Derek Miller and vocalist Alexis Krauss showed that the result of adding alpha male to alpha female was alpha everything. A rogue cheerleader’s megaphone is flush against your ear, middle school shrieks are unleashed so close to your face you can suss out the flavor of the Bubble Yum. Rhythmic gym whistles, stomps, slaps and claps only emphasize the fact that this is some hypercolor, survival-of-the-loudest playground where hopscotch has accelerated into full-contact sport. And if this sort of rioting and rallying is a “treat,” would anybody be left standing after Sleigh Bells’ Reign of Terror?

The first full minute of Sleigh Bells’ new LP has Krauss commanding a crowd that sounds no smaller than stadium-sized: “NEW ORLEANNNNNNS!/ What the FUCK’S up?” Alongside her, Miller is warming up his metallic squall with an occasional whammy bar dive bomb. The bass thud vibrates somewhere in your kidneys and she is saying “fuck” a lot and it’s the kind of bullying you get a rush from, even as the target. They are going to dominate you and dismantle the place, the fact that you might like it is a mutually beneficial afterthought. This summoning of adrenaline in opener “True Shred Guitar” is ultimately amputated by strobe light pummel chords and Krauss spitting, “Push it push it push it,” an antagonistic challenge that they obey over the course of Reign of Terror.

Where Treats was blinding in a florescent adolescence, Reign of Terror pulls tight the drawstring of that subtly ominous black hoodie. In “You Lost Me,” the setting is behind a Circle K where two “teenage metal heads in your denim vests” commit double suicide. Miller’s guitar bends smear down the wall with a thin viscosity as chunky hair metal arpeggios circa Def Leppard’s “Love Bites” or some ponderous Cinderella shit put the monster in this death ballad. The likeness is no accident; Miller has interviewed about his love for Hysteria as well as a host of old school heavies – Metallica, Pantera, Queen, Van Halen, Nirvana, Journey, the bands whose logos you’d see scrawled in the notebooks of the bad kids – and the decades old echoes are thunderous on Reign of Terror. In the interest of maximizing the maximum, cymbals smash and bash in unison with bombs of bass noise, and drum machines hammer away with the relentlessness of automatic weaponry. Inevitably Sleigh Bells dispenses with the metaphors, as samples of actual M-16 shots spray the intro of “Road to Hell.”

Krauss treads on this foundation of “fuck yeah” hypermasculinity as if she owns the place (and she might). It’s true that Sleigh Bells is the product of a collusion of opposites – he with the cock rock riffs, she with the fluttery cadence – but Krauss is as much a partner in crime as she is a foil. In “Crush” she plays off pop melody against aggressive pep squad chant; she is a scorched throat as she takes you apart “brick by brick by brick” in the devil-sign inspired “Demons”; her cooing, vaporous breaths in “End of the Line” contrast with the bob and weave syllabic flitting of her verses; “Never Say Die” sees her making meaning out of nothing or making nothing out of meaning as she repeats, “Ninety six power hour” in a richly vacant kind of mesmerism. She does not temper Miller’s aesthetic nor does she exactly converge with it, but there is no question she can hang with the loudest of sounds and baddest of dudes. In the dark – and Reign of Terror is graveyard dark – no one can stand in anyone else’s shadow.

The histrionic preoccupation with mortality is more than just a posturing for a heavy metal homage. As the band was on the rise, Miller’s father died in a motorcycle crash and his mother was diagnosed with cancer, so the grimmest lyrics here (“Heard you say suicide in your sleep/ Just get on with it”) are words of genuine anguish. It’s not a surprise, then, that Reign of Terror suffers from a few too many down-tempo outpourings huddled together at the back end of the track list, as individually great and ensnaring as they may be. But even in grief, Sleigh Bell are buzzy and bangin’ – after stepping through the shell casings there are enough bleacher-stomps, snap-clicks and big, dumb, glorious power chords to make this Thanatos-driven record sound like something that is heat-flushed and most assuredly breathing. So when Krauss charges, “And you will answer to/ No one else but me,” just give yourself over instead of pretending you have a choice.