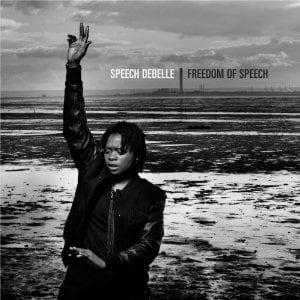 [xrr rating=3.75/5]Finally, a female rapper who doesn’t want to talk about sex or her pussy. England’s Speech Debelle has a huskier voice than most female musicians, but she has a skill for breath control and a flow that’s unparalleled among her peers. In hip-hop, a mostly male-dominated society, it’s refreshing to find a woman who doesn’t need to exploit herself verbally in order to entice listeners. Under the tutelage of Roots Manuva, Debelle’s first album Speech Therapy, won the prestigious Mercury Prize (and incidentally, became the lowest-selling album to do so, but that’s a different argument for a different time). She’s returned with Freedom of Speech, an ambitious and consistent record, partly due to working with producer Kwes on every single track. Kwes’ stripped-down, simpler grime style gives the album an ornate yet gritty sound and Debelle’s focused and punchy meter turns each phrase into a street tapestry, like graffiti on wax. As sole producer, the album gains a cohesion that is difficult to attain in rap/hip-hop and it keeps the album reined in throughout. Debelle’s lyricism is sharp, poignant and cut well above the tragically “traditional” styles of other artists like Nicki Minaj or Lil’ Kim or Trina.

Opener “Studio Backpack Rap” is a shotgun spread, with Debelle taking on a double-time spitfire as she takes the voice of potential critics who try to pigeonhole her sound. As the dirty synths squiggle, a ferocious bass sting kicks the shit out of your speakers, announcing that Debelle is not here to be labeled by just anyone. She also manages to do the “punchline swap” more naturally than a lot of other rappers, incorporating references as well as Kendrick Lamar did on his “HiiiPower” joint, including the obligatory “Fuckin’ Ridiculous” swipe from “So Appalled,” featured with acidic sharpness on “Live for the Message,” a jazzy, fake-horn tinted track that could be as danceable as it is preachy.

Debelle is the type that slaps the “b” in subtle around, but her mind doesn’t lend itself to understatement: as reflected by the album title, this is a record about being herself. While the previous record carried a theme of finding oneself and of forming a voice, Freedom of Speech features her coming back after a three year absence, including a nasty split with Big Dada for a while. She sounds rejuvenated and furious – with the exception of the cheesy “X Marks the Spot” (guess what that one’s about?), most of these tracks have a vigor and an unshakeable swagger – this girl can spit with the best of them. She holds her own against the always charming Roots Manuva and the competent Realism on slow burner “Blaze Up the Fire.” The beat slinks up, slightly syncopated under her opening verse, and then RZA-like Chinese strings creep in: shit’s about to bust off and then it goes off as Manuva delivers a verse as molten and strong as anything off his excellent 4everevolution.

Kwes’ variety and technique are always ear-catching, but he throws down on “I’m with It,” a deceptively mid-tempo beat that begins with seemingly harmless chimes and busts out a soulful female chorus (the only one on the album) that is supplemented by a triumphant digital flute section that Mike Skinner is cursing himself for now throwing off a track first. It’s a perfect companion to an earnest and sweet song, with Debelle expressing her feelings without falling for sentimentally purple prose – she’s with it, and she couldn’t be more clear. Her success as a lyricist and emcee is her confidence – her braggadocio is backed up by her ability, and she never appears shaken or even incredulous in her own thoughts. As she says on over the frenetic torture-racked guitar line of “The Problem”: “I shook hands with the worry man/ So it’s pure worry, man/ So I’m doing it like it’s my last album/ Nothing is guaranteed so watch the outcome.” With a flow and conviction as concrete as hers, along with the merciful lack of fucking and fashion talk, you’d be a fool not to. Freedom of Speech will likely go under the radar, but goddamn is Speech Debelle fighting the fight. She’s making female rappers an inalienable part of the game.