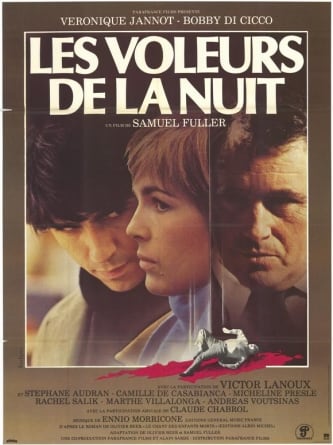 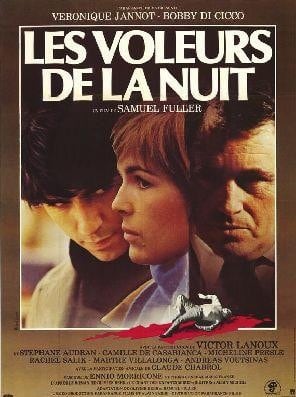 For what would be his second to last film, Samuel Fuller decided to return to his pulp roots, spinning in Thieves After Dark a nervy thriller about two unemployed youngsters, living in a New York-ified Paris, who fall in love – and into a life of petty crime. Unfolding briskly in stark shadows, muted ‘80s color, wooden dialogue and a cinematic vocabulary that proudly eschews nuance for plainspoken turpitude, it’s a bitter, TV movie-sized pill to swallow. Scratch below the surface, though, and there’s more at work: allegorical treatment of humanity’s darkest motivations as well as a passable chase picture, Fuller’s drifting, aqueous eye takes in the world of the film entirely, following its naively nihilistic protagonists as they tear down the same half-occluded alleyways as countless New Wave anti-heroes did. And below even all that, as ever: Fuller’s guts, gumption and journalistic, straight-shooting style.

Isabelle (Véronique Jannot), an aspiring art historian, and François (Bobby Di Cicco), the son of a famous cellist, may seem an unlikely Bonnie and Clyde (to whom they compare themselves frequently), but their desperate straits and the malicious behavior of a few clerks in the local unemployment office – compounded by their own giggling proclivity for vengeance and larceny – force their hands. Quickly fed up with busking, with few job prospects and aided by friends, the daughter of one of their targets, Corinne (Camille de Casabianca), and a thief-turned-music shop owner (Andréas Voutsinas), Isabelle and François turn their sights toward enacting payback.

They don’t get far, however. Besides a half-botched entry into the home of Desterne (Jacques Maury), Corinne’s father, the duo also invade the domiciles of the hard-assed, cruel Mussolini (Rachel Salik), whom they force to comb her own mustache while crawling around on the floor, as well as Louis Crépin or “Tartuffe” (director Claude Chabrol). It’s in crossing the second, who accidentally falls to his death after being startled by the lover-criminals, that escalates the action and eventually proves the couple’s undoing.

As young people squeezed at both ends by an uncaring world, too giddy about their mutual affections to care about a practical future, neither Jannot nor Di Cicco are particularly compelling in their roles (though that’s at least partly owed to the sub par dub). But as vehicles for the dark motivations Fuller wants to lay bare, and as gristle on which the machine of bureaucracy – and the plot of the film – wishes to interminably grind, they are effective stand-ins for any two people delusional enough to fool themselves into thinking crime is as easy as it’s portrayed in movies (including Fuller’s).

Chabrol’s Tartuffe, employing queasy grin and expressive, caterpillar eyes, similarly winds up prey to his own weaknesses. Before his fatal fall, he is out on his patio leaning precariously over the edge, his wormy tongue darting in and out as he spies a nude woman shaving her legs in an apartment above, her form reflected in his coke-bottle frames. Fuller himself even appears in the film as the fence Zoltan, a crusty bastard sporting a white eye patch with a matching suit and chomping a cigar, who prefers to spend his time watching Isabelle Huppert cough up blood in La Dame aux Camélias (“Can you die like she can die?” he asks) and becomes apoplectic if (like François) someone gets in the way of the tele.

In typical Fuller fashion, it turns out everyone in the picture is a dirty rat, crooked to the core and only looking out for #1 or, as Isabelle has it, “This is the ‘80s. It’s every man for herself.” Driven by sex, or money – “clothes, furs and a bulging bank account” as it’s put – no one comes out unscuffed in {Thieves After Dark}, from the creepy landlady to the voyeur Tartuffe to the corrupt cops involved in the film’s climactic shootout scene, set in a high, snowy Pyrenees village. In this world of puffy francs being slapped into palms, rabid pantomime, shattered glass and the increasingly acute desperation playing itself out on Isabelle’s face, not even Isabelle’s cat escapes the gravitational pull that greed exerts on the film’s characters. In that sense, the moral is classic Fuller.

Unfortunately, transporting the clunky tone of later work such as White Dog and Fuller’s usual B-movie flair to the gritty, hard-nosed world of his early crime flicks yields a Frankenstein that’s a little too campy and melodramatic to be taken seriously and so grim as to be lacking almost any levity whatsoever. Thusly, this 1984 entry, made during Fuller’s self-imposed exile in France and difficult to find copies of today, is ordinarily of little interest to anyone but completionists or Fuller fans. But in bypassing it entirely, so much would be missed – the bizarre cameos from Chabrol and Fuller, hints of New Wave infusion, the naturalistic setting. Not to mention the handful of artful, angular shots from Fuller and cinematographer Philippe Rousselot (who would later work with Tim Burton and Milos Forman, among others) that turns the somewhat tired plot into a game of eyes, close-ups, stare-downs and ocular intimidations. It’s a gritty syntax, but one that Fuller speaks well.

The couple’s crime spree intimacy severed by a curious canine, François gets to live out his orchestral aspirations once, stealing the symphony cellist’s chair in the orchestra pit and posing as his emergency replacement before coming to share Isabelle’s ignominious fate. A fitting finish for yet another one of Fuller’s doomed heroes. But as the curtain fell on François in Thieves After Dark, Fuller’s final act as a filmmaker (1989’s Street of No Return) was beginning, like shifting silhouettes under a flickering streetlamp, to take shape.