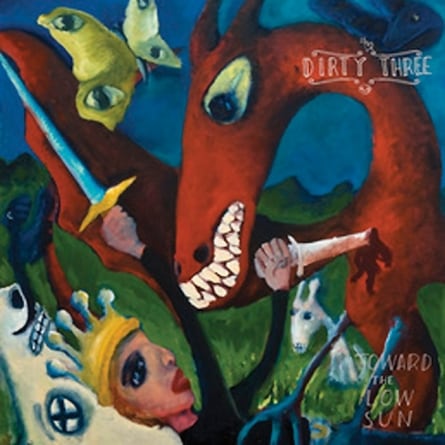 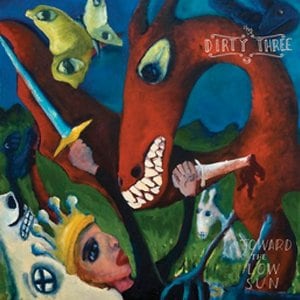 Exploding in a cavalcade of cymbals, pizzicato violin, and layers of guitar noise, the Dirty Three’s Toward The Low Sun enters our brain as an Australian pain in the ass. Infrequent guitar chimes attempt to create structure, but the drums are having none of it. Sounding more like the type of pre-practice jam that bands use to loosen their strings and warm up their fingers, the opening track is the most abrasive, frameless song on a record that revels in the raw and aimless; a mess, orchestrated by three of the world’s most renowned messmakers.

The Dirty Three, for the uninformed (or for those who just happen to not follow Australian instrumental noise-rock), consists of violinist Warren Ellis, guitarist and painter Mick Turner, and drummer/indie-rock wunderkind Jim White. They’ve been around, on and off, for more than two decades, but are perhaps still more well-known for their side projects – particularly Ellis for his longtime kinship with Nick Cave, in the Bad Seeds and Grinderman, and White’s collaborations with Bill Callahan and Will Oldham. The last album, Cinder, was a weird 70-minute sidestep for the band, allowing even some vocals to enter into the mix.

Toward The Low Sun, more than on any Dirty Three record in the past, seems to relish in contrasts. Rather than going all-out drunken country dirge à la “I Remember a Time When Once You Used To Love Me” or serene ballads à la Ocean Songs, the crew is intent on juxtaposing various styles that have made them stand out over the years. “Sometimes I Forget You’ve Gone” pairs sparse, lilting piano with the drums of a four-minute “Saturday Night Live”-style ending.

“Moon on the Land” is a twisted folk song, with Ellis gliding through a rhythm with one beat too many and chords that don’t quite turn where they should. A small band of strings rise valiantly for a few bars before landing right back to the initial gallop. Low Sun falters at times, as grunge-y slogs like “The Pier” and “That Was Was” make you question why three of the world’s most coveted avant garde musicians are releasing what could pass for glorified Silver Jews demos, especially following a seven-year absence from the studio. Laziness as an intended concept is doubtful, but a Southern, slothlike drawl persists throughout Low Sun.

Towards the end of Low Sun, a few songs fall miles from the opening blast: “Ashen Snow” finds the coal and ash from the album’s opening act morphed into pure white beauty. There are slight suggestions of dissonance in the slow build, with Ellis piling on top of himself, like a fiddler’s pub band doing Explosions in the Sky. The song, naturally, ends in a dissonant crash that the trio doesn’t allow to ring out. Noting this penultimate moment of clarity, more than a few themes from the album’s first few songs emerge in closing number “You Greet Her Ghost,” as if woefully dotting the lines of a circle back on the chalkboard. It’s sloppy, beautiful, and just a little less daring than you hoped it’d be – in other words, just another Dirty Three record.