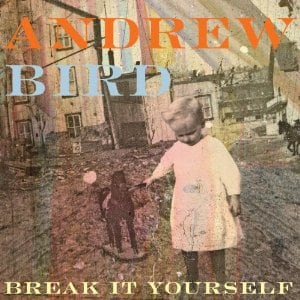 [xrr rating=4.25/5]With their shifting arrangements, unexpected mood swings and lyrical tendencies towards darkly humorous, somber or otherwise fatalistic subject matter, many of Andrew Bird’s songs feels like a great jumbling of the senses or having one’s bearings disoriented. It takes time for listeners to gain firm footing in a Bird tune; this is meant as a compliment to be sure, as Bird’s work fits the textbook definition of songs that reveal their complexities and multiple layers with repeated listens. Bird moves at a unique pace on his albums – the listener is free to come along or not – a trait that’s become increasingly pronounced on every one of his solo albums since Weather Systems.

But thus far they’ve always been worth the effort, and Break It Yourself is no exception. Bird again successfully walks a tightrope between densely structured soundscapes and relatively stripped down songs, presenting a world in which the biology of life – family, mortality, shared history, memory – is prevalent. A lot of the album is difficult to absorb initially and Break is probably Bird’s least immediately accessible album to date, which is saying something. With its uneasily dreamy atmosphere, chanted vocals and frequent tempo changes, “Desperation Breeds…” is a somewhat unwelcoming opening track, but it hints of what’s to follow; indeed, most of the album’s first half travels such paths. “Eyeoneye” starts with a heavy, swampy bed of instrumentation reminiscent of “Fake Palindromes” before morphing into a crashing, clanging rock song. Both “Danse Caribe” and “Orpheo Looks Back” begin with a pastoral violin line but eventually give way to instrumental passages that swell above and threaten to bury Bird’s vocals.

Break It Yourself occasionally relies on a more simplistic approach, returning to the types of quasi-ballads that have dotted Bird’s catalog. It’s a key quality to what prevents Break from becoming overwhelming or an exercise in experimentation, which dogged parts of Noble Beast. “Lazy Projector” glides deliberately courtesy of a stately violin melody and Bird’s carefully-sung vocals; with lyrics such as “history repeats itself/ And time’s a crooked bow” it also ostensibly offers a clever nod to 2007’s “Armchairs.” A pair of songs near the album’s close are similar in tone and are executed masterfully; “Sifters” and “Fatal Shore” unfold like slow ruminations of growing old and just might represent Break’s two best – or, at least, most emotionally impacting – moments.

The album should find favor with those already familiar with Bird’s style; for newcomers or those who stopped at Andrew Bird & The Mysterious Production of Eggs, it might be a slog at times. The worst that can be said of Break It Yourself is that pieces of it can come across as too precious for their own good, particularly on “Neath Death Experience Experience” and, to a lesser extent, “Lusitania.” Even then, it’s possible that with the benefit of time these songs will resonate better. And that’s what remains so captivating about Bird’s music: it often requires a gestation period to fully appreciate its nuances, but almost invariably this happens. Rare is the Andrew Bird song that doesn’t get better with age.