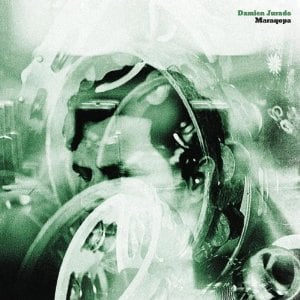 [xrr rating=3.25/5]A good singer-songwriter can turn a bit of poetry and a pretty melody into a moment of guileless introspection. Though they sometimes toe a microscopic line between unpretentious and insufferable, one who’s truly excited by songwriting and performance jumps to the fore even if you involuntarily cringe at their rhyme of “Washington” with “Washington.” With 11 previous albums that lope from folk ballads to nearly rock ‘n’ roll, Damien Jurado has honed his songwriting to a razor-sharp edge. He is well known for his unique production and use of found sounds, both of which sound contemporary to the era of their release.

Maraqopa, his 12th release, aligns perfectly with the current indie zeitgeist. Found sounds and judicious use of reverb locate the songs precisely in 2012 without wasting cheesy lyrics on iPhones or Twitter. He doesn’t intend to create a “timeless” record, a common pitfall for the songwriter set, but he is going for a sort of Neutral Milk Hotel-inspired specificity of sound. Tape hisses on the title track. A music box twinkles on “Reel to Reel,” his grandest effort at sounding like the National. Paired with opaque lyrics dense with symbolism, these quirks set his soft-spoken ballads apart without becoming tiresome.

Though too many singers today mask weak voices with softening reverb, Jurado’s voice is actually well suited for a bit of feedback. That’s not to say that his voice is forceless; rather, he uses the resonance to enhance, not obscure, himself. It almost sounds like two different people sing “Nothing Is the News” and “Life Away from the Garden” while his pinging backing vocals on “This Time Next Year” soften the harsh and sparse drums on the track. His reedy tenor thrums on “Working Titles,” a song that could have easily been performed by fellow singer-songwriter Josh Ritter for its melody, subject and cutting, heartbroken lyrics like, “I’ll show up in the title of your song/ I only hope somebody requests it.” It’s easy to miss the rattling percussion and xylophones subtly inserted beneath Jurado’s guitar and the four-bar chorale that bridges verse and chorus but they add a citric brightness to balance the lyrics’ sobriety.

But Damien Jurado is more than an aggregator of sounds. He builds sand castles fortified with the shells and stones scattered nearby. He shatters plates and tiles to build small mosaics. His songs are deceptively firm, striated layers of audio arranged into something pretty to hear and thoughtfully made. In the end, his thoughtfulness, the evident enthusiasm for his craft, help him stand out as much as his lyrics and instrumentation.