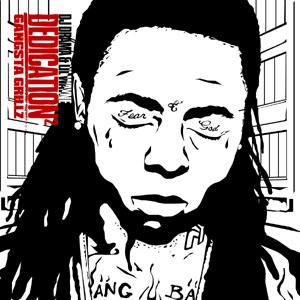 It’s hard to believe five years have passed since the world unanimously decreed Lil Wayne to be the absolute best rap artist on the planet. A claim Wayne himself began circulating in 2004, three years later he wound up releasing 77 tracks in a 12 month span. He was an MC whose “gimmick” was his tireless output and whose main draw was his lyrics. Still, many hip-hop traditionalists only familiar with his singles were hesitant to give crown prince of Ca$h Money his due. This is likely because Wayne’s best material wasn’t on their radar, namely his 2006 mixtape Dedication 2.

To understand what Dedication 2 meant to Wayne’s legacy, one first has to remember the context of the mid-2000s mixtape circuit. In 2000, after Queens rapper 50 Cent was dropped and essentially left for dead by Columbia Records, he reignited his career by putting together his own “mixtapes,” self-pressed CDs of him rapping over the hottest industry beats, and distributing them himself. After that landed him a deal with Interscope, it became the format for new artists to get exposure, namely Young Jeezy, whose mixtape game dealing directly with the streets gave rise to his solo career. This unfiltered access for artists to their listeners also helped acts stuck in label limbo, such as the Clipse, to become bigger stars than ever and expand their fanbase through their We Got It 4 Cheap mixtape series. But for a long-term established act like Wayne, Dedication 2 is what catapulted him from rap celebrity to hip-hop superstar.

There’s a long-standing myth perpetuated by people who don’t listen to rap music that Wayne was some forgettable late-‘90s rapper who, at the release of 2004’s Tha Carter, woke-up one morning and just decided to be good. This mindset’s almost a subtle form of racism, dismissing Wayne’s work with the Hot Boyz and suddenly finding merit in his later output because he’s now referencing things white people talk about. Wayne’s always been a hyper-creative artist with a variety of styles, memorable wordplay and notably (under order of his mother) wasn’t allowed to curse on record until he reached 18. Knowing the level of talent he’s always possessed, mixtape king DJ Drama linked with Wayne and began to show the world exactly how much he could do. 2005’s Dedication was a critically heralded first run that helped drive interest into Wayne’s Tha Carter II album. For their second go-round the following year, Drama put Wayne to the test and left him a hip-hop legend.

What makes Dedication II such an incredible listen can be boiled down to two major selling points: Wayne has many styles, and Wayne has an absolute mastery of said styles. With Drama’s excellent choice of productions ranging from the classic New Orleans sound Wayne grew up on (“Walk It Off” which uses U.N.L.V.’s “Don’t Be Greedy”) to the biggest mainstream records that year (“What U Kno” from T.I.’s “What You Know,” “Hustlin” from Rick Ross’ “Hustlin,” “They Still Like Me” from Dem Franchise Boyz’ “I Think They Like Me”) as well as independent/underground hip-hop’s best loved beats (“This What I Call Her” from Little Brother’s “Lovin’ It”) and classic singles (“South Muzik” from Outkast’s “Player’s Ball”) the DJ knew exactly what beats would accentuate Wayne’s positives. Wayne went to town, constantly switching speeds, cadences and structures, all while keeping his wordplay top notch. Whether you look for your rap artists to rhyme eight consecutive lines in a row or you want to hear them do an impeccable song-length “Posse on Broadway”-era Sir Mix-A-Lot impression (“Workin Em”), the songs on Dedication 2 range from impressive to absolutely flooring.

Aside from some of the undisputed best rapping ever committed to tape, Dedication 2 stands as the documentation of Wayne’s persona at the pinpointed peak of his reign. Speaking in between songs in a much more cognoscente manner than we would see in his 2009 documentary The Carter, Wayne explains how his “best rapper alive” mantra is a call to competition, which only inspires him, as well as how much he absolutely loves the act of rapping itself. It also includes “Georgia Bush,” Wayne’s scathing indictment of the government’s response to his hometown during Hurricane Katrina which shares a level of venom and brutal honesty to a degree that it would never see a commercial release.

“Georgia Bush’s” inclusions, as well as Wayne’s freedom to rhyme over whatever beats he wanted, epitomizes the mixtape medium’s ability to connect with listeners. Eight months later, DJ Drama would be raided by the F.B.I. and the mixtape game would dramatically shift to the internet, eventually springboarding the free download release that’s become commonplace today. While Wayne’s star continued to rise, eventually leading to Dedication II’s inexplicable “official retail” release, he would soon fall in love with codeine, Auto-Tune and Drake-style punchlines, all hindering his creativity and damaging his creative output. Fortunately for us, when future generations ask about the Wayne’s claims of being the best rapper on the planet, we’ll show them Dedication 2 for a reminder why Wayne once ruled the world.