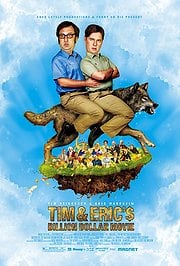 [xrr rating=4.5/5]In my years as a film critic– and before that, as a film student– I’ve seen an unhealthy number of incredibly fucked up films. I’ve been exposed to In the Realm of the Senses more often than any human being should be. I’ve come around from absolutely loathing Man Bites Dog to unironically viewing it as one of the great cinematic achievements of the ’90s. I am depressingly well-versed in the cataloger of Gaspar Noé. And yet I’m still not sure if I know quite how to process Tim and Eric’s Billion Dollar Movie.

Despite being a fan of the comedy team for some time, I can honestly say that a significant portion of the duo’s feature debut took me completely by surprise. In certain respects, the film is a natural step up from what Tim & Eric have been doing since the Tom Goes to the Mayor days– presenting the weirdness of “normal” American life without judgment or bias, simply magnifying it to a hideous level and forcing viewers to wonder where humor ends and experimental psychology begins. Impeccably mixing the worlds of situationism, Dada and surreality, Tim & Eric operate in a realm where normal is bizarre, bizarre is plain and nightmarish monstrosities are behind every suburban facade. But Billion Dollar Movie suitably takes that ambition to a new stratosphere of scope and mutilation.

Set in the world’s most terrifying mall, Billion Dollar Movie takes everything comedy fans expect from funny films and everything Tim & Eric fans expect from the two and throws it in a blender, distorting the typical comedy feature storyline of “losers must make up a huge sum of money in order to save the day” until you’re not just abandoning all hope, but all logic too. If there’s any Rosetta stone to be found for deciphering the film, it’s actually more than likely not the duo’s prior television work but instead the music videos that Wareheim has been creating on his own, specifically clips like HEALTH’s “We Are Water.” That’s because the film, despite having a conventional (by Tim & Eric standards– it even has a love story!) narrative, is firmly committed to a profoundly disturbing dream-like state with an emphasis on body horror. It’s almost as though Tim & Eric have simply become the vehicle for a three way spiritual possession courtesy of David Lynch, David Cronenberg and Harmony Korine.

The Lynch aspects are clearest in the film’s hazy tone and ensemble cast of funhouse mirror interpretations of American Midwest characters mostly performed by mainstream comedians who would never dare to push the envelope anywhere near as much in their own work, resulting in a kind of anarchist piggybacking. Will Ferrell appears as the owner of the mall the two wind up taking over, an eccentric, vaguely rich person who views Tim & Eric as the inheritors of his personal hell. Will Forte is a belligerent owner of a sword shop that is paid by the city to not sell swords. John C. Reilly is the world’s most sickly wolfboy, a Tiny Tim-like figure known only as “Taquito.” Even “Twin Peaks” alum Ray Wise gets in on the action, heading up the Shrim Institute that is responsible for what is arguably the film’s most dangerous moment.

Tim & Eric do horrible things to nearly all of these characters in the film, offering up truly traumatic sequences and shocking violence as well as scenes of dehumanizing perversion, the most memorable of which features children. Throats are slit, genitals are mutilated and innocents are used as shields or sacrifices and though I am in no position to guess the motivations of Tim & Eric I am fairly confident that the reasons have less to do with entertainment and more to do with creating the kind of discomfort usually found in the works of enfants terrible like Michael Haneke or Noé. Even Cronenberg himself has mostly abandoned the kind of visceral body disintegration that Tim & Eric utilize in the film’s darkest corners and one is forced to wonder as a result just what might happen if Tim & Eric went in a more serious direction.

All of this is to say that the film is not light, not in the slightest. This is not a movie that you go to for laughs, even if a significant portion of it is hilarious. There are some sequences that use the team’s patent editing style and public access aesthetic, as well as the face morphing that they’re arguably most associated with, but other than these minimal moments of recognition, the bulk of the film is entirely unlike anything you have ever seen before or will see again. That makes it tempting to label it a must see film, the kind of thing that you can never unwitness or stop thinking about long after it’s over, but it’s hardly the kind of movie you can be said to enjoy let alone rewatch. Roger Ebert notably gave the film a pitiful half star rating, but even that seems like a failure of criticism, especially given Ebert’s own belief in reviewing, wherein he rates films based on how well they meet the demands of their audience and accomplish what they set out to achieve. By that standard, Tim & Eric’s Billion Dollar Movie is a perfect product, a work that will no doubt alienate, disgust and scar audiences in the exact way Tim & Eric desire. Tim & Eric have made a masterpiece of bad taste and truly dangerous comedy that stretches the limits of what that term even means and what its responsibilities are, resulting in a film that will likely never be forgotten even as it’s doomed to be eternally misunderstood and unloved.