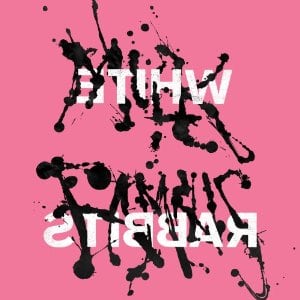 [xrr rating=4.0/5]A few years ago when White Rabbits were deciding how best to follow up their debut, they settled on surrendering themselves completely to a make over courtesy of Spoon’s Britt Daniel. The result was It’s Frightening, an album that took the Spoon template so many modern bands aim for on their productions and twisted it just enough to create something not necessarily new, but at least refreshing. Taut and rhythmic, It’s Frightening was that rare sophomore effort that handily beat out the debut, almost entirely because it showed a band that knew how to evolve without making a complete 180. That canny restraint is present on White Rabbits follow up, Milk Famous, which continues the Spoon connection thanks to producer Mike McCarthy who guides the band further down the path of evolution.

This time out, that takes the form of an expanded Krautrock palette, which is immediately apparent with the curiously named opener “Heavy Metal.” With a motorik rhythm that stands in stark contrast to the physical chaos that made the last album so appealing, “Heavy Metal” leaves the legwork to an abundance of studio trickery, jagged bursts of whirring reversed guitar lines forming the hooks, unidentifiable snippets of noise and percussion augmenting the beat. Chaos reigns in a more identifiable form on follower “I’m Not Me,” the studio trickery dialed back here in favor of staccato drums and a piano line that may as well have been sampled from Spoon, which is by no means a bad thing.

The album continues along the same lines as “I’m Not Me” until the deliciously new wavey “Temporary” pops up, its bassline addicting thanks to its habit of agitating the other instruments, teasing them with seductively sleazy thrusts that juxtapose perfectly with the brittle, bitter guitars, Stephen Patterson’s vocals left in the middle, a third wheel who hasn’t yet decided whether it’s time for a menage a trois or if an altogether new partner should be found. It’s likewise no mistake that one of the album’s other sexual highlights is titled “Danny Come Inside.” Which is, of course, then followed by “Back for More.”

Maybe that heightened state of arousal is responsible for the efficiency of the album, which is longer than its predecessor but breezes by much more quickly. There are peaks and ebbs to the record, but on the whole Milk Famous is easy to return to and exciting, like any lover should be. It helps that in McCarthy White Rabbits have an ideal director, someone who can keep the seduction subtle rather than wolfishly aggressive, imbuing even less sexualized efforts like “I Had It Coming” with a pleasantly hazy vibe that’s not too dissimilar to the editing gimmicks of the erotic films of the ’60s and ’70s. McCarthy helps the band keep everything just familiar enough to be comforting and relaxed but just exotic enough to offer surprises and twists and as a result Milk Famous showcases White Rabbits as a group in a rarefied groove that should keep listeners coming back for more again and again.