As one of 2000’s major summer affairs but a non-entry in the decade’s box office charts, Wolfgang Petersen’s disaster-at-sea story The Perfect Storm might not seem worthy of extended treatment, but it holds peculiar locus. Released (while I was still a high school student) in the heyday of multiplex blockbusters and thick in the pre-9/11 era of extraordinary, almost idealistic melodrama in popular cinema, it was one of few “big movies” of the time I was not dragged to by some or another friend. Today, it elicits the usual asinine recollections from people who as kids used to see summer blockbusters to stay out of the California heat: “It’s so sad” and “I remember it being wet. Slippery. Lots of water.” As a tragic true story of death at sea, should anything different be expected?

Adapted from the book of the same name, both concern a bizarre, once-in-a-lifetime storm system that lashed the Northeast in late October 1991. Formed from the chance comingling of an extratropical cyclone and the Gulf-borne Hurricane Grace, the system caused over $200 million in damage through flooding and high winds. More seriously, it left a handful of people dead along its path, including six marlin-catching mariners from Gloucester, Massachusetts, captain and crew of the Andrea Gail, caught on the open sea on a last-minute, make-or-break expedition. The storm, the fate of the Gail, the science underpinning the system and the outcome of rescue attempts in its wake round out the book; the first two are really all Petersen’s Perfect Storm can handle, though the other two show up, albeit highly truncated. 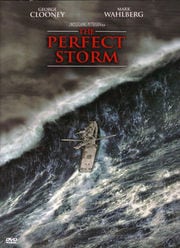 In real life, the six swordfishermen – Capt. “Billy” Tyne, David Sullivan, Alfred Pierre, Michael Moran, Dale Murphy and Robert Shatford – spent their final days and hours, first on a short shore visit, and then an impromptu voyage, unassumingly attending to their jobs. In the film, Tyne (George Clooney), Shatford (Mark Wahlberg), Murphy (John C. Reilly) and the others are portrayed as grizzled, dysfunctional brawlers and hotheads who still, paradoxically, have loved ones waiting for them back on land. (Natch, this swordfish fest fails the Bechdel test.) None of the cast, with the exception of William Fichtner, are able to manage much more than half-formed roles, being given neither time nor subtext enough to register much. Shatford in particular, according to the film’s contrived syntax, has a deep romantic connection with town resident Christine Cotter (Diane Lane), as clunky slow-motion sequences attest. Apart from brief exchanges – scored with James Horner’s gracelessly unsubtle, falsely emotive swells – and a few moments of mouthy dialogue, though, you wouldn’t know it. (My viewing partner was much more blunt: “Are you actually supposed to care about these characters? Because I don’t. Really.”)

But in The Perfect Storm the divorce in authenticity runs deeper than a lack of characterization (in fact a lawsuit – eventually dismissed – was brought against the film’s creators by the families of Tyne and Murphy). When Tyne, in a fit of stubborn pride, boasts that he will brave choppy autumn seas and break haul records, swearing, “You’ll get a shitload of fish!” and pressing his crew back into service after only two days ashore with threats of immediate unemployment, which the crew – under pressure of alimony payments, personal foibles and Bush I-era deflationary recession – acquiesce to, Petersen glosses over an important dimension to the story. These men, who in the penultimate stage of their fatal venture effectively decide that 60,000 pounds of marlin is worth more than the lives of six men, take the completely unnecessary risk for little more than a chance to “set the market” and (for Tyne) a shot at glory and self-redemption. The crew members’ blue collar concerns, part and parcel of an industry ravaged in turns by monopolization, globalization, overfishing-induced scarcity and regulatory constriction, run deeper than is alluded to. In Petersen’s hands, the nuance behind their motivations is lost, and telegraphs as naive avarice.

This is in no way meant to reflect on the lives of those who actually died as a result of the 1991 Nor’easter. For in truth, reality is not something that concerns The Perfect Storm in general – not just in the half-assed, muddled accents (rendering “the Grand Banks” into “the Crab Cakes,” as in “the Crab Cakes are no joke in October”) and not just in the soundstaged “open water” sequences. The adaptation is an especially clumsy one, surprising for a director with as extensive experience as Petersen, and with a decently talented cast at his disposal. As scripted by Bill Wittliff (Legends of the Fall), the result of Petersen’s filmic adaptation of Sebastian Junger’s book is a parable for the inherent dangers of greed and pride, laced with a few dated CGI achievements and crippled by flat scripting. As filmed, The Perfect Storm is a disaster of decidedly localized proportions, inflated with Pearl Harbor-sized melodrama. The truth of what happened those days in late October is so different than as fictionalized in The Perfect Storm it’s very little wonder this cheesy, clumsy adventure-drama has been largely forgotten, consigned to the cinema depths.