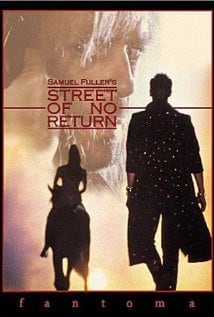 There’s a desire to see filmmakers have the same sort of satisfying closing chapter to their careers that they bring to their best cinematic stories. Sometimes it happens: Before the Devil Knows You’re Dead is a satisfyingly gritty final film for Sidney Lumet, and Robert Altman’s smart, playful A Prairie Home Companion neatly brought together a wry consideration of endings and mortality with an appreciation of the pleasure of ragtag creative collaboration in a way that felt like a nearly ideal ending for an iconoclastic career. More often, though, directors sputter out with a series of increasingly embarrassing or even demeaning works that are kindly forgotten about when later career surveys take place. Sadly, Street of No Return is the sort of film that inspires a Fuller fan to look away.

In its particulars, it seems like a fine opportunity to Fuller to come full circle. French producer Jacques Bral recruited Fuller to polish and film a screenplay that was adapted from a 1954 novel by David Goodis, a fellow typewriter jockey for the movies and the pulps who was a friend of Fuller’s back in the ‘40s. The material promised a return to the sort of tightly knotted crime stories that represented some of Fuller’s finest and most famed work. The sensibilities seemed to be properly aligned.

Execution is whole different trick, though. Fuller may have started the ‘80s by asserting he still had the chops to make great art with The Big Red One but he ended the decade floundering with a tone deaf, poorly made piece of junk. The very first shot of the film is a close-up of a guy getting hit in the face with a hammer in the middle of a street brawl, and that stands as the beginning and end of startling moments in the work. It’s a procession of awkwardly structured scenes of virulent urban decay that paints the waning days of the 20th century as some existential typhoon of gangland mayhem.

The film stars Keith Carradine as Michael, a former rock star who has been reduced to living as a vagrant in the dank alleys of the unnamed city that’s tearing itself apart. He’s topped by a head of long, frizzy gray hair that looked like he swiped one of Andy Warhol’s wigs after it was run through too many cycles in an overheated clothes dryer. A sequence of flashbacks show how Michael stumbled to this point, a series of events that naturally involves nasty underworld figures, forbidden love and a dangerous beauty (Valentina Vargas) who he first met when she rode a horse topless in one of his music videos then bedded years later having forgotten the earlier encounter. Michael is presented as a major pop sensation who makes all the girls swoon (including Fuller’s then 14-year-old daughter Samantha in a cameo), but his music sounds like Neil Diamond at the pinnacle of his “turn on your heartlight” soft rock bombast. Given his status as an Oscar-winning songwriter (for “I’m Easy,” from Altman’s Nashville), it makes sense that Carradine co-wrote all of the songs but they’re flatly terrible, although it’s amusing that one of them features lyrics by Fuller.

While he’s lounging around at the bottom of the barrel, Michael comes back into contact with the thug (Marc de Jonge) who put him there in the first place and gets drawn into helping the police take him down. That unlikely partnership is set into motion when Michael is falsely accused of killing a cop with a broken whiskey bottle that he was only taking a slug out of on the street (apparently living down to his assertion about alcohol when he was rich and famous: “It’s for losers”). Once he finally convinces the authorities that he’s innocent—their crack interrogation tactic of asking him, “How long have you been a homicidal bum?” doesn’t lure him into a false confession—Michael tells them he can help bring down the crime boss who’s basically planning to turn the city into a giant crack den with a few high-class shops to launder the drug money. The police chief (Bill Duke) is under pressure to bring the city under control, making him more than willing to enlist Michael’s help in going after their mutual adversary.

What follows is mostly incoherent with cacophonous gunplay, different characters facing off with either howling fierceness or icy rage and, for good measure, a bad guy taking a bullet to the crotch. Much of the editing is slipshod (Fuller claimed Bral recut it) and the dialogue has little of that satisfying pulpish snap, leaving the actors stranded trying to extract some potency from the plainly absurd (“Cops today, they only know computers, they don’t know that killer look”). The whole trudges to an unconvincing happy ending, promising redemption and reunion.

Fuller never directed another film. He kept writing and acting, appearing on the other side of the camera as late as Win Wender’s 1997 film The End of Violence. He died that same year, a few weeks after his 85th birthday. If Street of No Return is far from ideal as a last statement, there was a burgeoning movement at the time of his death to recognize the value of his previous contribution to American film, led by the 1996 documentary with a title that named the chosen weaponry of his life’s fights: The Typewriter, the Rifle & the Movie Camera. Fuller may have been creatively done by this point, but the process of refining his legacy was just getting underway