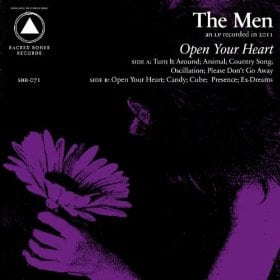 [xrr rating=4.5/5]As I’ve listened to Open Your Heart over the past couple of weeks, I feel like I’ve been at war with myself. The music critic part of my brain wants to dissect the Men’s new record and show how the band is a product of all its influences, a list that includes the likes of Sonic Youth, Buzzcocks, Meat Puppets, The Ramones and, yes, CCR. Then, there’s the 17-year-old kid within that wants to jump up and down, yelling, “This record rocks! It has killer guitar riffs and awesome drum solos! You gotta hear this!”

As much as the stern critic in my head wants to rebuke the adolescent in my heart, saying, “Calm down! It’s only rock ‘n’ roll,” I won’t let him. This is a damn good record. As its title suggests, there are enough powerful emotions on display here to keep my inner emo teenager brooding for months to come. There’s so much more going on, though. Open Your Heart isn’t merely a raw display of rock enthusiasm. The Men might have created 2012’s first real masterpiece.

The Brooklyn outfit became one of last year’s biggest buzz bands after they lit up the blogosphere with Leave Home, their debut LP on Sacred Bones. The group, fronted by the pleasantly crusty singing (and screaming … and coughing) of Mark Perro and Nick Chiericozzi, mixed punk rock riffs with an avant-garde spirit. There was a continually dark undertone to the group’s crunchy guitar drones and minimalist lyrics (for example, singing the line “I would die…” repeatedly on the opening track). While Leave Home showed us a band with much potential and an arsenal of fresh, forceful sounds up its sleeves, Open Your Heart feels like the true consummation of the group’s talent, a fully-fledged, ebullient work.

Each track on Open Your Heart is a little world unto itself, yet works together with all the other songs, the hallmark of a great record. It’s hard to imagine how the straight-ahead, Foo Fighters-invoking rock of “Turn It Around” can coexist with the acoustic folksiness of “Candy” or the experimental destructiveness of “Cube.” Somehow it all works. It’s like the Men are operating a crazy carnival and invite everyone they know to come check it out, the hipsters and the metal heads and the rednecks and the punk kids. Not only do they all get along okay, they become best friends.

Open Your Heart’s simultaneous consistency and diversity can be explained partly by the band’s unyielding artistic vision. The Men go about the business of taking beloved genres and altering them so they’re still recognizable, but pleasantly “off.” Take “Country Song,” for example. It’s no secret that the Men love classic country music, as they revealed in a recent interview with this publication. This track is a playful deconstruction of the genre, a lopsided waltz with tremolo-heavy, twangy guitars invoking the sound one might hear while stumbling drunkenly in and out of Nashville honkytonks at two in the morning. “Animal” is a classic rock-infused ditty with slide guitars, screamed lyrics presumably about hedonistic sexuality and girl-pop backing vocals repeating the line “He’s an animal” in an ironically sugar-sweet style. The Men are masters at creating music that sounds like stuff you’ve heard before, but not exactly. The band challenges and comforts the listener in exactly the right proportion.

In order to truly understand why Open Your Heart is so satisfying, look to the first two tracks of Side Two. The title track is about vulnerability and self-disclosure, with the key line, “There are no mirrors here/ Do what you want/ Be who you want to be.” “Candy” is an alt-country anthem, a kind of manifesto for today’s working indie musician. The speaker asserts that “When I hear the radio play/ I don’t care that it’s not me.” Together, “Open Your Heart” and “Candy” form an emotionally naked one-two punch, a cathartic moment that finds the artists channeling powerful feelings that come from their own experiences. Plenty of indie musicians claim to be authentic but are caught hiding behind the smoke and mirrors of their hipness. The Men are the real deal. They never abandon their unique vision, even while alluding to lots of really cool music. Just listen. It’s not hard to separate the boys from the Men.