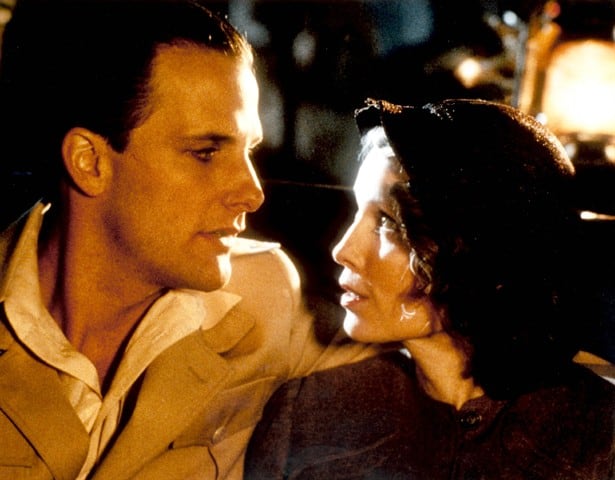 I’ll be up front about this: I am not a fan of Woody Allen. Generally speaking, I find his movies self-indulgent and repetitive, as well as large amount of self-preening masked under a thin veneer of introspection. And don’t get me wrong, it’s not that I can’t relate to them. I’m neurotic, unhappy, narcissistic and a bit of a nebbish; if anything, I should be the ideal audience for films like Annie Hall. But while I cannot fault Allen on a filmmaking level, they’ve never seemed to click with me. So, why did I choose his 1985 film The Purple Rose of Cairo as an entry for our Film Dunce feature? Because, little reader, everyone deserves another chance every once in a while.

The Purple Rose of Cairo has several key elements that made me want to utilize it as a potential entry point to enjoying everyone else’s favorite self-obsessed New York filmmaker. One, it is a well known film of his, one whose name at the very least conjures up images of romance and mystery rather than his typical grousing. Two, it is one of the director’s relatively famous films that does not contain an Allen-avatar to stand in for his opinions and travails. And thirdly, it concerns a subject near and dear to both Mr. Allen and me: the escapism of cinema itself. As Allen films go, it may be a bit lightweight; it certainly doesn’t have the supposed depth of Annie Hall or the sustained storytelling of Manhattan or even the lunacy of Sleepers. But after watching it for the first time, The Purple Rose of Cairo might be the first time I’ve watched a film by Allen and felt that it had an actual heart. 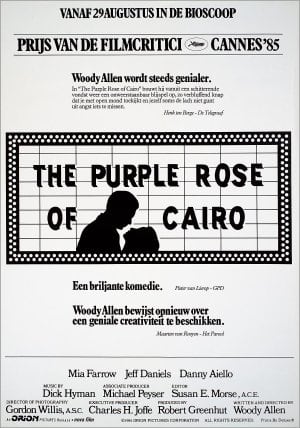 As the film began, though, my hopes plummeted when the opening credits ran and it appeared to be standard Woody tropes. Antiquated, formal white lettering on black cue card-style shots; a jaunty jazz score; a deep roster of character actors who I was sure would be playing to type. But the essence of The Purple Rose of Cairo turned out to be actually very atypical of Allen as I have experienced him; he may have been using the same toolbox as his other movies, but with a very different result. He’s even stated in interviews that this was one of the few of his films that turned out how he initially intended, which almost makes me want to re-examine some of his films.

The film concerns Cecilia (Mia Farrow), a meek New Jersey waitress and abused housewife during the Great Depression. Her whole life revolves around what film is playing in the local theater; the first shot of her in the film is her face staring, enraptured, at garish movie posters, only to be started by a title letter falling off the marquee, nearly hitting her. And although it’s easy to chalk it up that up to the slapstick element Allen has never really shaken off, it’s also a telling moment. Cecilia finds bliss in the flickering, black and white screen, but it also blinds her to the dangers of the real world. And the title of the movie that nearly crushes her? The Purple Rose of Cairo.

In a few deft scenes, the film establishes character: Cecilia goes to watch the movie of the week over and over, while her lout of a husband (Danny Aiello) drinks, gambles and slaps her around. She’s a lousy waitress, spending her time daydreaming about movies and breaking dishes, but when she’s in the theater, all her worries drift away. It’s a testament to Farrow, one of the more underrated actresses of her generation, that she can so clearly convey Cecilia’s slow sense of relaxation and wonder so wordlessly, just by the quiet smile and distant look on her face as she watches something just off screen.

But the real hook of the film is when a minor character in the movie within the movie, Tom Baxter (Jeff Daniels), addresses Cecilia directly and steps into the real world. I was very amused by how curiously low key a tone the film treats this sudden collision of fiction and reality (such as it is). People are surprised by a fictional character suddenly taking life, but more in the sense of demanding their money back from the manager and the producers worrying about being legally responsible for any mayhem. No one really addresses the why or how, which makes the film both feel that much more whimsical (even as spousal abuse, poverty and mutual infidelity come up) and that much stranger. Practically the only explanation ever given is in the form of an Easter egg; Tom and Cecilia end up in an abandoned amusement park, him professing his love in front of a faded copy of the iconic poster for legendary magician Carter the Great.

As I expected, rapid-fire hijinks quickly ensue for the lovebirds, but what really surprised me is the relative briefness of the film. For a movie that deals, however lightly, with concepts of reality, perception and authorship, it moves a quick pace and closes out at a terse 84 minutes. By the end of the The Purple Rose of Cairo, I was fully ready to discover more about these characters: Tom Baxter, the film hero who has memories of his father but never knew him (because he died before the movie began); Cecilia, who plays the ukulele after her indigent father ran off; even Gil Shepard, the upwardly mobile actor who plays Tom in the film. It’s telling that my largest groans involved Tom and Gil squaring off against each other; simply put, in an age in which The Social Network can clone a person on screen, Allen’s old-fashioned body doubles and camera angles don’t age well.

The Purple Rose of Cairo may actually be my favorite Allen film at this point, despite my fears going in. It’s a slight movie, but while watching it, I found its lack of self-importance to actually be its most charming feature. While I could never lose the sense that it was a “Woody Allen production,” I was more lost in the movie than I’d ever been with one of his films. I never got quite to the sense of bliss that Cecilia did, but hey, if all it takes for me to enjoy Woody Allen is for him not to be in the movie, that’s fine by me.