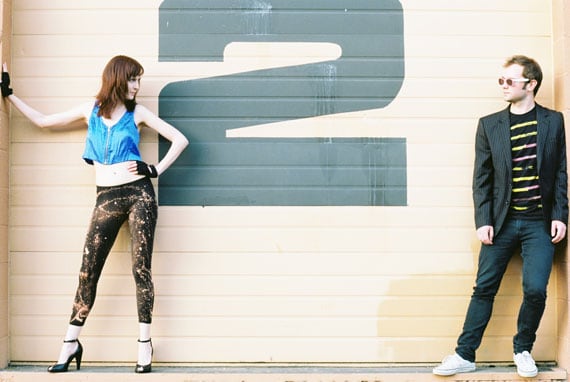 Patricia Hall and Ian Hicks make dreamy dance music with big synths, big vocals and big percussion. Their self-titled debut out now on Captured Tracks was the understated electronic album of 2011. Gauzy drum machine delay and Juno-heavy tracks “Psychic Driving” and “In Throes” have disseminated and now have people bouncing around the bedroom and getting closer on the club floor. The couple talks with Spectrum Culture about coming together over music, studio equipment and their artistic tributes to Factory Records.

Where did you first meet? What was it like when you both decided you could make music together and realize you ambitions? How often do you practice and where?

Patricia Hall: Ian and I first met at a party in Portland where Ian was DJing. I noticed that we were both into the same music, same vibe. A friend introduced us. At that time, Ian was living in San Francisco and I was living in Portland. We kept in touch, talking about music and sharing tracks with one another. A couple of years later he moved to Portland. He has a ton of great synths and drum machines and had been sketching out songs with them. I had just started singing and showed him a song with my vocals. He invited me to work on music with him and in our first couple of sessions together we ended up recording a cover of Siouxsie’s “Red Light” and Throbbing Gristle’s “Hot on the Heels of Love”. We were happy with how those sounded and decided to work on some original songs together. I have never had such great chemistry working with anyone on music before. It wasn’t long until I joined him on synths and we started writing original music together. We practice and work on music at least 2-3 times a week. Ian’s in grad school right now so we don’t get to work on music together as much as we’d like. If we have a show coming up or have a deadline to meet we might work every day. Our practice space is a couple of miles from our home. It’s located in Glassell Park, a neighborhood in Los Angeles.

Ian Hicks: It’s always hard to know when you’re completely finished with a song. We felt that with most of the songs for the album we were crafting something that was a little more complex and less skeletal than the EP. We had been playing “Voices” and “The Cold World Melts” live a lot and felt that it would be appropriate to re-visit, explore and flesh them out for the full-length in order to give the whole product a feeling of consistency.

What is the Cold World? Why is it Cold and how does it Melt?

PH: The “Cold World Melts” was originally inspired by the world the lovers live in from the film The Lives of Others which is set in East Berlin during the Cold War. The idea of the cold world melting is about one’s perception changing from a cold, isolated place to a place of warmth and happiness with the introduction of love despite everything else being terrible.

Can you talk about the percussive elements of the Cold World Melts EP and the self-titled Captured Tracks LP?

IH: On the EP we used Roland TR808 and TR707 drum machines embellished with some fx sounds mostly from the Juno 60 or Pro One. On the LP the 808 and 707 were our workhorse machines, but we also got into experimenting with some more esoteric units like an old Univox and TR727. About halfway through recording I acquired a 909 so it makes some guest appearances on tracks like “Do You Remember?” and “Eyes Closed.” I’m excited to develop more work with the 909. That thing is awesome.

What are the vocals processed with? Patricia, what is your experience with singing? How did you get started? What kind of vocal exercises do you do the night of a show?

PH: I use a bunch of different reverb, delay, and chorus units on our recordings. On “Always” I used a pitch shifter to make my voice one octave lower on one tracks and on another with it just with delay. For live performances I’ve been using the rack version of the Lexicon MX-200 with my own submixer to have total control over my effects. I took voice lessons for a while in Portland through a woman named Julia Cramer. I recorded those lessons and use them to warm up and to focus on technique before shows.

Ian, can you tell me about programming and sequencing? What other kinds of keyboards, synthesizers and percussive technology does Soft Metals use?

IH: I use a variety of sequencing equipment, I find the older 16-step x0x pattern style sequencing the most inspirational, you can end up with patterns miles away from where you started with all sorts of weird jacking syncopation. Our go-to synths for the album were Pro One, jx3p, Juno 60, mono/poly and jd800. Plenty of other stuff made its way onto the album but those are the most prevalent.

IH: We use three keyboards live and an assortment of sequencing, effects and drum machine gear. The main goal is to approximate, as close as we can, how things are set up in the studio. There are lots of trigger cables, midi and fx chains and everything is hooked up at multiple connections. It’s kind of a nightmare to set up but we like the live-ness of it.

PH: I prefer working in the studio. It’s so much fun to jam with Ian and come up with new ideas together. It’s fun to be on stage, too. We love to travel and meet new people.

Can you talk about the images and work with Anna Morosini and Mike Sniper for your self-titled album for Captured Tracks? There’s the prologue to a kiss on the front cover situated in the same way of Bauhaus and Joy Division records. It’s a central image. The colors are muted and there’s an emphasis on white on black. Then there’s someone kneeling in a bed of grass with one palm upturned for the backside of the album. For the vinyl edition you also have the pull-out of a grayscale image of a rolling ocean wave above the recording credits. The juxtaposition is pulling.

PH: Mike Sniper, the owner of Captured Tracks did the design and layout for our album. The layout is definitely a nod to Factory Records. It has a classic, elegant look that we like. Ian and I discovered Anna Morosini’s photographs on Flickr. The “prelude to a kiss” imagery fits with the mood of our personal dynamic and the music we make together. The muted colors are fitting to the melancholy we experience in our lives. It’s also what cloudy Portland looks like most of the year, especially when we were writing and recording the album. Black and white is symbolic to me- it represents duality, balance, the masculine/ feminine dynamic, positive and negative charge. The image on the back with the girl kneeling on the ground in a field evokes the ritual of meditation, reflection on one’s self, a look into the psyche. The image of the ocean represents emotion and sexuality. All of the things I’ve just discussed are what make up our music and I think these images work quite well to demonstrate those ideas.

You recently covered Throbbing Gristle’s “Hot on the Heels of Love” and you make highly danceable but also very meditative electronic music and are a part of a specific recording artist’s scene. Can you talk about the state of electronic music without guitars and why you chose to express yourself this way?

PH: Our cover of “Hot on the Heels of Love” was recorded in 2009 and was the 2nd song we ever recorded together. We have nothing against guitars. We just like making music with synths and drum machines and find that electronic instruments meet our creative needs. Ian played the saxophone on the first song we recorded together, a cover of Siouxsie and the Banshees’ “Red Light” and I loved the way that sounded. We don’t have any rules about the music we make. Perhaps one day a guitar will make an appearance on one of our songs.