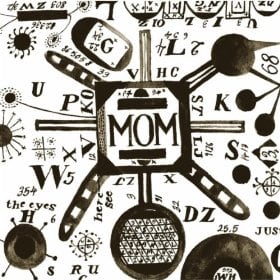 [xrr rating=4.25/5]Thank God for bleeps and bloops. All reductiveness aside, electronic music is one of the more challenging and rewarding genres of music, due to the role it puts the listener into. With its complex structures and usual lack of lyricism, it’s a canvas of tools arranged for the audience to align as they see fit. Of the groups with longevity in the business, Germany’s Mouse on Mars are nearing two decades of crafting groovy and elastic sonic textures with personality in both the samples and the instruments as well as their previous efforts, which have ranged from straight electropop to ambient soundscape. On Parastrophics, despite vocal confirmation, the duo sound reinvigorated – their previous efforts carried a delightful haze, but this record pops and vibes from corner to figurative corner, alive with samples and vocal excerpts that are simultaneously humorous and insane (like the phrase “Facebook’s a cock block“) which makes-up the pseudo chorus of “Chordblocker, Cinnamon Toasted.”

Parastrophics is a tight album – electronica can sometimes get lost or derailed in its exploratory nature, but the control that Jan St. Werner and Andi Toma exhibit over every aspect is incredible. These sounds bubble and percolate and feed into one another, but never do they face into the background or lack any cohesion. It’s almost scientific, and also manages to remain catchy and engaging. “Wienuss” sounds like what would happen if a break-dancing robot dropped its own beat, complete with strong drum kicks and a loopy circuit synth that crackles like a bolt of energy, which then feeds into the neon stretchiness and grim, dark keyboard of “They Know Your Name,” a Kraftwerk song that did too many uppers and is trying to talk itself down.

“Syncropticians” is a surgically precise little number, with spacey keyboard refrains intermingling with a jazzy synth line that diffuses like the vapor from an e-cigarette. The percussion and the lilting spurts also give the track a victorious tempo, which is maintained even when it drops out into gloomy territory and right back again, without ever expending any energy – it’s on some musical inertia shit. Movement and kinetics seem to be an entrenched theme of Parastrophics – it feels like an album that never loses steam. Perhaps it’s a direct reflection on Werner and Toma’s time in the business, but cuts like “Imatch” are perpetual and intimately netted together – there’s nary a spent fraction of a second in assembling this pretty and entrancing heat. Even when the ‘80s sheen synths and video-game beats kick in, they’re more like the thrusters on a rocket than expected drops, blasting the song into a crazy new level of dopeness. Follow-up “Polaroyced” almost seems to sneer at that notion, with its eclectic multiple keyboard lines which stack on top of a break-beat drum and a rubbery synth, creating a light show in the mind. “Baku Hipster” also seethes and spins with fiery synths that segue into closer “Seaqz” and its machine gun beeps and synth Gatling gun bursts. It’s a final assault that mows down any possible doubts or reservations.

Seriously, these tracks did not come here to be fucked around with – Mouse on Mars have spent 18 years making this kind of music, and they’re not about to lose touch just yet. In fact, Parastrophics suggests they’ve only gotten sharper and more in tune with the scene. While they’ve never truly crossed into the mainstream, there’s a reason they’ve been around this long, and Parastrophics is the proof that talent can only take you so far without experience, but when the two meld, you’re in for something stellar.