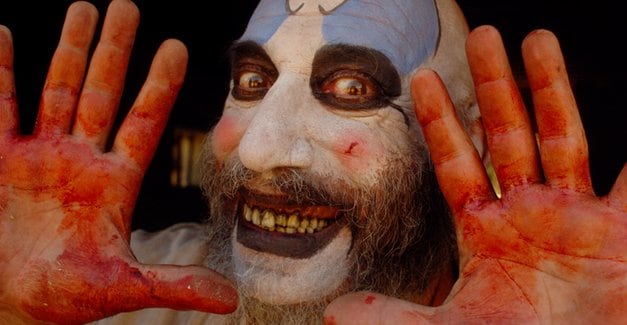 Rob Zombie’s still young filmography leaves a lot to be desired, but there’s also promise. His debut feature, House of 1000 Corpses, was a witless, poorly shot mess that couldn’t quite find the sweet spot between playful homage and imaginative innovation. His reboot of Halloween was significantly better, creating a gruesome and thoroughly frightening vision of Michael Myers that unfortunately faltered with Halloween II, a relentlessly tedious film that deserves at least partial marks for its full commitment to being bat-shit crazy. Among these patchy frameworks of modern horror is the genre masterpiece The Devil’s Rejects. A sequel to his feature debut, it’s a film that surpasses its predecessor in every way. It’s tighter, scarier, the plot has an intense momentum to it and Zombie is in full control of his directorial vision.

The Devil’s Rejects picks up, plot-wise at least, where House of 1000 Corpses left off. We’re reintroduced to the Firefly family, those crazed psychopathic murderers, with a tone-setting firefight between themselves and Sheriff Wydell (a wonderfully hammy William Forsythe) and his SWAT team. Zombie stages this opening scene as an old fashioned Western shootout, basking his characters, guns and cop cars in hot oranges and yellows, one of the many homages to Tobe Hooper’s The Texas Chainsaw Massacre. All but one member of the family manage to escape during the shootout – Otis (Bill Moseley) and Baby (Sheri Moon Zombie) sneak out the back door, while the police capture Mama (Leslie Easterbrook). Down the road, Baby lies in the middle of the road in order to draw a woman out of her car, giving Otis enough time to viciously stab her in the back and steal the car. Cue the opening credits and the Allman Brothers’ “Midnight Rider.” It’s a chilling and stylish beginning that acts as a harbinger for all the immorality that is to follow. 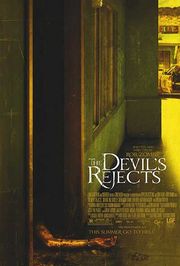 Like the previously mentioned Texas Chainsaw Massacre, The Devil’s Rejects wallows in its own nihilism, which, in my mind, accounts for the underwhelming reception it got upon its release and still receives to this day. Many audiences prefer horror films that have an obvious moral center, something that allows us to distinguish ourselves from the villain and root for the good guy. This is the main point behind the Carol Clover’s famous term “The Final Girl.” As an audience, we are forced into the perspective of the killer, but as the film progresses, our perspective shifts to the final girl, the last standing “good” person, who inevitably, in Clover’s view, becomes masculinized and wields phallic objects in order to confront the killer. Zombie makes no room for such a cathartic shift in perspective though, trapping us in the cold-blooded vision of the Firefly family, mainly Baby, Otis and Captain Spaulding (a nightmare-inducing Sid Haig). We’re with them every step of the way, essentially making us culpable witnesses to every murder and sadistic intention.

The film’s most discomforting moment comes when we’re trapped inside a shady motel with Otis and Baby, who have taken Roy (Geoffrey Lewis), a country singer, and his family hostage. Zombie lets the camera linger, demonstrating a skilled patience, as Otis sexually assaults Roy’s wife before moving to a bloody and tense conclusion that involves more than a few gunshots and a messy “surgical” procedure that subverts, perverts and draws on Hooper’s main villain, Leatherface. Accomplished direction and photography isn’t enough to make an audience uncomfortable in their voyeuristic position though, and that’s where Zombie’s tight, witty script comes into play. Despite the horrendous acts we’re witness to, the characters of Otis, Baby and Captain Spaulding execute them with the calculated precision and sadistic joy that makes a great set of anti-heroes. When Otis threatens one of the band members, saying, “the next word that comes out of your mouth better be some brilliant fucking Mark Twain shit, ‘cause it’s definitely getting chiseled on your tombstone,” we can’t help but chuckle. There’s something darkly humorous about a cold-blooded killer evoking Mark Twain before he slaughters someone. As an audience, we love these over-the-top personalities, and there are times we cheer for them.

The fact that our perspective is never allowed the chance to shift, that we must constantly see the world through the eyes of the Firefly family, is exactly what makes this film such a subversive and satisfying piece of horror. Zombie’s vision is as cold and calculated as the personalities of his titular Rejects, and the absence of an escape route leaves us in an uncomfortable, voyeuristic position, where we find ourselves not only as witnesses to escalating acts of violence, but also looking forward to the next kill, the next bit of seduction. By the time the film’s final sequence rolls around, as the remaining family members face off against a SWAT-organized roadblock while Lynyrd Skynyrd’s “Freebird” plays in the foreground, the indulgence of it all seems earned. We’ve come this far with the Rejects and we’re willing to follow them into battle. We’ve made a complete transformation, from detesting the grotesque imagery and actions of the Firefly family, to actively rooting for them to murder a group of innocent cops. The Devil’s Rejects does what torture-porn films hope to do, but with much more nuance and style; it asks us to confront our own lust for violence, stylized or otherwise, and dig deep to uncover the moral underpinnings of such an open call for bloodshed.