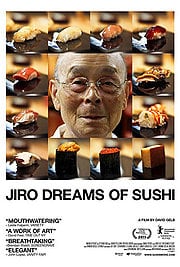 [xrr rating=3.75/5]Jiro Dreams of Sushi fulfills the promise of its title with shot after shot of scrumptious raw fish. On the surface, Jiro is an artful look at the preparation of one of Japan’s most famous exports. And unless you abstain from raw fish, it is enough to make you want to leave the theater and seek out the nearest sushi bar.

Unfortunately, you’re not going to find sushi of the same quality on display in David Gelb’s documentary. That’s because the movie is about Jiro Ono, the 85-year-old master sushi chef who runs Tokyo’s world-renowned Sukiyabashi Jiro. Let me explain just the restaurant’s exclusivity: you have to make a reservation at least a month in advance, the tiny place seats only 10 people at a time and a full serving of 20 pieces of sushi costs $300 a head. There are no appetizers, no tempura or tonkatsu. Only sushi and it’s the chef’s choice. Thankfully, Gelb’s film allows those of us who do not live in Tokyo and/or cannot afford to drop that kind of a cash on a meal to press our noses to the glass and experience the thrill of eating Jiro’s sushi vicariously.

At its most fascinating, Jiro Dreams of Sushi explores in precise detail the process of getting that tiny morsel of sushi onto the plate. Gelb follows Jiro’s oldest son and heir Yoshikazu as he visits Tokyo’s famous Tsukiji Market to seek out the best fish. Jiro dispenses nuggets of wisdom, such as a chef first must recognize the taste of best food before hoping to produce food that is worthwhile. Gelb also shows us how Jiro’s exacting perfectionism helped him reach and maintain the level of acclaim he currently enjoys. Each and every aspect of his cooking and his restaurant is considered, including the placement of his guests and how he serves left-handed eaters versus right-handed diners.

Gelb films the preparation of sushi and in precise and tight detail, with the minimalist music of either Philip Glass or Max Richter adding a solemn note to the proceedings. Gelb films Jiro and his apprentice chefs cooking in a ritualistic manner. This is food preparation at its most ascetic, there is no time for the non-stop jawing and verbal gymnastics that plagues most cooking programs on television.

The central question that nags at Jiro Dreams of Sushi has us wondering why the octogenarian insists on working day and night at such an advanced age, even after a nearly fatal heart attack. If you ask Jiro, he would say retirement seems boring. But it’s something deeper than that. Jiro is an innate artist and in order to survive he must create, even if his masterworks are edible. Somehow the impermanence of it all is very Zen, yet Jiro’s desire to be the best is fiercely human. Therein lies an interesting conundrum.

It is obvious that Gelb holds Jiro in awe and at times the film feels more like a hagiography than a well-rounded documentary. We never learn anything really intimate about the man. We meet his sons but his wife not only ever appears in front of the camera, she is barely even mentioned. A pallor of death hangs over the film, yet Gelb never really explores Jiro’s ideas on legacy. He just simply wants Yoshikazu to carry on with business.

Jiro Dreams of Sushi may not penetrate its subject such as the best documentaries but it is entertaining and artful. After viewing the film, it is difficult not to hold Jiro in awe. Someone who has worked that hard for eight decades deserves reverence and respect. Thank god for film. Pretty soon this amazing man will likely be gone and although many of us will never taste his food, we can at least get a taste of it this way.