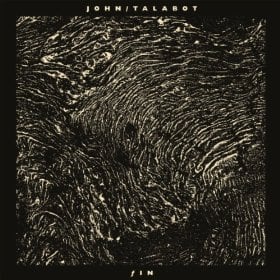 [xrr rating=4.25/5]“Tropical” is a frequently bandied-about descriptor of John Talabot’s work. While his debut full-length ƒIN certainly sounds as though it was extracted from amidst the shadows of canopy cover, its offerings aren’t breezy and beach-like but instead thoroughly subterranean. The album is tropical only in the sense of a shaft of light streaking into a dank cave in the rainforest floor. Talabot made a name for himself locally under different monikers in the Barcelona club scene, and he has since delved into shinier incarnations of house with a flurry of singles, most notably a track actually titled “Sunshine.” Being dubbed “tropical” goes with the territory.

In many ways, ƒIN serves as a throwback to the origins of house. At its core, house consists of progressively layering new sounds over a basic beat, and despite casting a wide net with ƒIN, Talabot never completely strays from that formula. Opening track “Depak Ine” may be the most obvious example of this, with the emergence of frog chirps and obscure chattering emitted from other creatures of the night. Humming synth and staccato plucking rise to the fore and, by the time the programmed percussion hits, the track has morphed into a creepy crawler.

“Destiny” overturns the rock and exposes the album to light − so much so that featured guest Pional’s fluffy vocals make for a jarring transition. Talabot keeps the album fresh by never getting mired in the kind of repetition that so plagues the house genre, but the atmospherics nearly make “Destiny” a misstep. Still, Talabot manages to inject enough of a loping beat to keep within his overarching aesthetic. “El Oeste” meanders at its inception, with scattered percussive claps and drifting keys, but settles into a foreboding ambiance before all is said and done. The peal of a woman’s scream opens “Oro Y Sangre” − something of a shock at first listen − but the frightful wailing is quickly obscured by the plunk of bongos and soon blends into the rest of the instrumentation as Talabot keeps pulling from his bag of tricks.

Another ray of light peeks through the undergrowth in “Journeys.” Fellow Spaniard Ekhi Lopetegi of Delorean offers echoing guest vocals that drift along as though conjured from the ether. Pattering percussion and a rumbling beat evoke a tribal vibe that carries over into “Missing You,” one of the highlights of the album. In that track, indecipherable chants couple with an infectious percussive beat to embody the kinetics of the entire album, one that never skitters ahead into dubstep or sinks into dirge. Throughout ƒIN, even the most organic sequences sound juiced.

On the tail end of the LP, “Last Land” incorporates a Middle Eastern flair and “Estiu” injects a bit of funk along with munchkin-like vocals effects reminiscent of Tyondai Braxton’s mic-work with Battles. On “H.O.R.S.E.,” more of those pinched inflections join forces with break beats and an icy, palatial overlay that could have been pulled from the Knife’s 2006 masterwork Silent Shout. But as Pional’s guest vocal loops again rise up in the final track “So Will Be Now…” it’s clear that Talabot has crafted a sound both familiar and innovative, one rife with electronics yet drawing from the primordial. Somehow he manages to create a brooding work that’s also entirely danceable, and, with what he’s demonstrated here, ƒIN should be the beginning of big things for John Talabot.