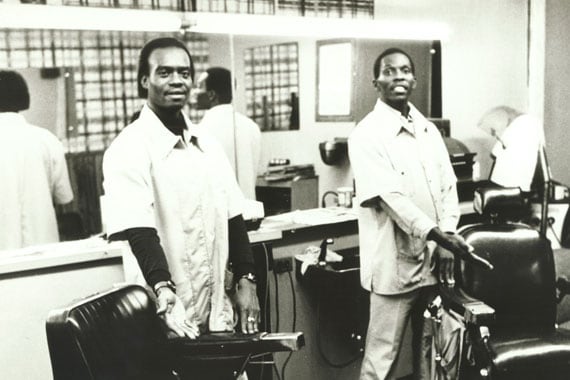 Many filmmakers begin their careers with student films or college theses, and while for many people “student film” is lazy critical shorthand for “amateurish,” let us remember that Killer of Sheep is technically a student film. With that in mind, Spike Lee’s own thesis and his first major work, Joe’s Bed-Stuy Barbershop: We Cut Heads, is as valuable a part of the director’s filmography as Do the Right Thing if you want to track the evolution of the auteur.

Joe’s Bed-Stuy opens with a murder – more specifically, the murder of Joe (Horace Long) himself, making the title a Sword of Damocles hanging over the head of our actual protagonist, Joe’s partner Zack (Monty Ross), now tasked with running the shop himself and effectively in Joe’s place in more ways than one. Joe ran a numbers racket in the shop, but Zack simply wants to “cut heads” and be a legitimate businessman – hardly the right move when the only reason people come in your shop is to make bets. As such, it’s hard to blame him for caving when a local crime boss wants to restart the barbershop numbers game.

Writer/director Lee hardly emerges fully formed with his first effort, but Joe’s Bed-Stuy presents kernels of the auteur we’ll come to know. Lee is undeniably a New York filmmaker in the vein of Woody Allen – to whom his early work drew comparisons – and Martin Scorsese, who’s the more relevant cinematic progenitor for the purposes of this discussion. Joe’s Bed-Stuy has the neo-realistic NYC trappings of early Scorsese, particularly Mean Streets in which the underbelly is irremovable from the geography. In Lee’s film, the streets are indeed mean and rural Georgia is referenced as a permanent refuge from the stress of city life.

While much of the film is concerned with Zack’s fall from grace at odds with the urging of his moral wife Ruth (Donna Bailey), Lee occasionally ventures outside the main plot to deliver some verité scenes that anticipate later Spike Lee Joints. Jehovah’s Witnesses barge into the shop to sell magazines, regular customers come in expecting the numbers racket will continue and Zack’s at-risk protégé Teapot (Stuart Smith) takes up amateur photography and teaches a younger boy on a stoop how to properly swear. Moreover, Teapot offers a sense of socially conscious storytelling, as a boy hired to be kept out of trouble just gets into even bigger criminal activity. It’s in the scenes with the young Teapot and the stubborn, experienced Zack that the film really shines, delivering compelling character interaction that wouldn’t be out of place in Do the Right Thing.

Armed with classmates Ernest Dickerson and Ang Lee as cinematographer and assistant director, respectively, Joe’s Bed-Stuy is reasonably well-crafted if a bit rough compared to future outings. The film has the obligatory lulls between lines of dialogue that are pretty much a staple of student films, but the cinematography and editing are capably rendered, while Lee’s dad Bill Lee fills in the gaps with a wonderfully jazzy score.

Through its main plot, Joe’s Bed-Stuy threatens to descend into the territory of morality play. While our hero Zack screams strong, All-American businessman for his initial refusal to engage in his predecessor’s dubious activities in favor of working on his own terms, he is ultimately human, refusing to offer lucrative services like the ever-so-trendy Jheri curls and falling victim to his own greed despite his awareness that Joe did the same and paid for his life. However, Spike Lee refuses to moralize and caps off Joe’s Bed-Stuy Barbershop with an ambiguous ending – the doomed, stubborn man playing checkers with the apathetic boy, as the camera pulls back and blurs as it zooms on the red, white and blue of the barber pole.