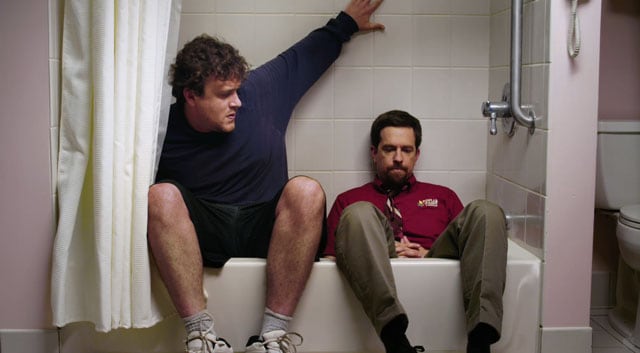 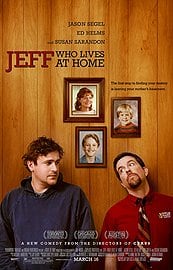 An oft-repeated, never entirely invalid criticism of the so-called “mumblecore” wave of filmmakers is that, sticking too close to verisimilitude, they produce works that lack drama, wallowing in the dullness of everyday life. This points to a central question of art: is the real substance of drama in the way reality is documented or in how it’s transcended, left behind in favor of something grander, more intense? This question is often rendered moot by the most adept mumblecore filmmakers. Andrew Bujalski’s Funny Ha Ha literalized the movement’s awkward epithet to depict speech patterns in an uncannily realistic manner, drawing our attention to the everyday patterns of non-communication swept under the rug by conventional dramas. And Joe Swanberg’s and Greta Gerwig’s Nights and Weekends succeeded in evoking a terrifying, too-close intimacy that easily eclipsed many conventional dramas precisely because it was unafraid to blur the lines between performance and reality. The Duplass Brothers work primarily at the level of mundane, everyday life, but although the story of their new film Jeff, Who Lives at Home might, on paper, seem dull and off-putting, they manage to infuse vitality into its well-worn themes.

We are introduced to the eponymous character (Jason Segel) as he records himself describing a belief in cosmic signs. Ironically commenting on this monologue, a cut reveals that he has been sitting on the toilet the entire time, evincing a subtle disconnect between the way Jeff lives his life and the way he envisions life in the macro sense. Stirred out of his listless, pot-induced haze after receiving a call from someone looking for a man named Kevin, Jeff takes off after this sign. The fact that Jeff sees numerous references to “Kevin” throughout the course of this day, which coincides with the entire span of the film, points to a nagging ambivalence: if you look for signs, you will probably find them, but do they really mean anything? But Jeff follows this thread and actually manages to have a significant impact on the world, his own life and the life of his brother Pat (Ed Helms), with whom he has only lukewarm relations.

Though a sweet and effective sub-plot revolves around Jeff and Pat’s mother Sharon (Susan Sarandon) and an encounter at her workplace, the crux of the film is in Jeff and Pat’s interactions. A chance glimpse of Pat’s wife (Judy Greer) with another man provides the main narrative thrust, the inciting event that unites the brothers and leads them to pull themselves out of their respective ruts. Pat’s own lack of a conscious worldview creates friction with Jeff’s assertion that there’s a cosmic order, a belief which, like conspiracy theories, has a distinct psychological basis relevant to this story: we yearn for order, for a higher power to organize our lives at a level beyond our own cognition and will, partly as a way to replace the missing father figure. And lo and behold, this is precisely the structuring absence that shapes Jeff’s and Pat’s lives. They make only vague references to their father, but the void he leaves unmistakably resonates. And beneath Pat’s brusque insensitivity and Jeff’s atrophied stasis, there is an undercurrent of pain that would be merely solipsistic if this paternal absence was not such a widespread phenomenon today.

One way out of their individual mazes is through direct confrontation with one another. As with 2010’s Cyrus, the Duplass Brothers create ideal environments for their actors to excel and display sides of themselves so genuine that their performances transcend the sometimes mushy material they’re given. When they use long or even medium shots, the Duplass Brothers tend to let their camera follow the action, but in tight close-ups, the frame locks the characters in and forces them to face up to the reality between them, simply because they cannot seem to escape its penetrating, unwavering gaze. Segel’s and Helms’ performances here are particularly laudable, nuanced and containing just enough breathing room to suggest glimmers of realistic spontaneity. One imagines the Duplass Brothers could elicit similarly exceptional performances from a variety of actors. It is often deeply engrossing to observe the uncanny skill with which the filmmakers shape such engaging performances.

Tightly compressing an entire day into less than 90 minutes, the Duplass Brothers unsurprisingly provide a too-neat resolution for their characters, albeit a satisfying one. At the film’s climax, Jeff seems to be given insight into his elusive destiny. But that’s not quite right: it seems like revelation takes over and cosmic order finally shows itself, but it would be wrong to take Jeff at his word. I don’t believe in signs or some cosmic, deterministic scheme of the universe, and the Duplass Brothers probably don’t either. Jeff’s mystical babble is the film’s red herring, and when he finally finds his destiny, performing a selfless and heroic act, it’s solely because he stopped waiting for signs and opted instead to make decisions and take action. He may believe, mistakenly, that a sign led him to that point, but this is simply a convenient way for his mind to ease the transition to individual assertiveness. If the film’s “just do it” conclusion seems too facile, though, there are more than a few grains of truth in it to prevent us from cynically dismissing Jeff’s newfound destiny. We may not always find opportunities for similar heroism, but it’s nonetheless true that significant change in our lives does occur as a result of the conscious choice to take action. The Duplass Brothers root these stray insights in performances that allow personal transformations to register directly on the actors’ faces, and their genial, unpretentious attitude never alienates the viewer from the potential grandiosity of the themes they’ve tackled here. These are two filmmakers most at home in the quotidian, and what they do with it is slight but nonetheless warmly generous and thoughtful.