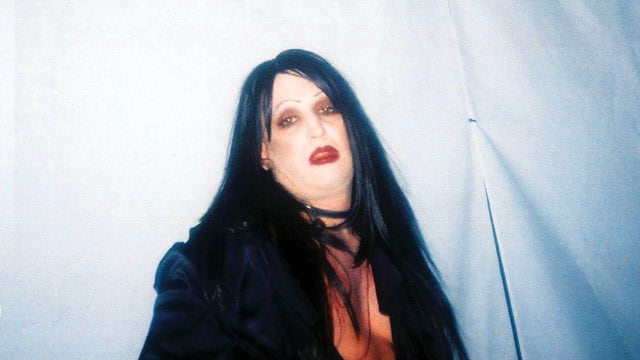 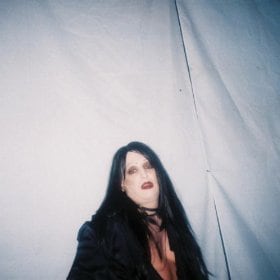 This time last year mystical dark-pop band Austra from Toronto, Ontario was readying their debut record Feel It Break. Austra is the sonic synthesis and combined personality of six people creating what it would sound like if Florence and the Machine had a cagey younger sister who didn’t get asked to prom because she did magic in her room and her lunch bag was questionable. There were usually cups of dirt and glow in the dark gummy worms inside. The boys were scared and the girls were intimidated. After arriving at this personification by listening to Austra’s excellent submission to the post-goth wave of Feel It Break, it’s no surprise that half of Trust is represented by Maya Postepski. Postepski is the stoic drummer responsible for programming beats and performing live percussion of the witch-tastic-ecstatic Austra.

Maya Postepski and bandmate Robert Alfons’ project Trust is decidedly dark. The cover of TRST dons the anti-compositionalist’s portrait of an androgynous figure, a specimen of goth culture caught with a candid snapshot, cut at the forearms; the face of which suggests heavy drug use, even heavier makeup and late nights. TRST is painted in an emotionally black coat of wet acrylics with song titles like “The Last Dregs,” “This Ready Flesh” and “Sulk.” There is no doubt a present stylistic gloom pushing forth from TRST. Their aesthetic straddles the non-secular paradoxes of Salem and the borrowed artifices of Crystal Castles. What saves Trust’s debut from being pegged as nothing more than a beautiful contrivance of the trendy dark music moment is the element of palpable sorrow they bestow. Postepski and Alfons hurt. They hurt bad. But the hurt hurts so good on TRST. The pain is necessary and for how doomy TRST is on the spectrum of techno, the darkness here is terribly danceable. The catharsis of danceable melancholia recalls Depeche Mode’s Speak and Spell and Soft Cell’s Non-Stop Erotic Cabaret with just the right amount of credible helplessness that both musically and lyrically sets the scenes of late night club destructiveness and permissive alone time. Much of what TRST is about is self-observance – the kind that follows the application of thick black eyeliner before hitting the deep night.

“Bulbform” is one of those bass-crunching “Holy shit is this happening?” moments. Along with “Gloryhole,” “Bulbform” knocks you up the side of the head with massive synths that build rave-ready walls of sound. The low humming vocals are mounted to pounding industrial drum and bass lines. And at about 140 BPMs, that sonic combination seems to say, “We are coming for you and there’s nothing you can do about it.” The ominous “Dressed for Space” exudes a different kind of dance-terror with a rolling synth obligato twinkling in analog warmth. It’s harrowingly ghoulish yet the beat employs those classic Euro-born high-hats and Chicago-birthed bleeps. Alfon’s voice soars. He sings affectedly deep most of the time, his voice reaching similarly into the 1980s in the way of Cold Cave’s Wesley Eisold, assuming the registry of the stilted baritone David Gahan. In other instances Alfons is a dead ringer too for fun-house contemporaries. “Sulk” winks at the vocal characters on Suzanne Kraft’s Green Flash EP and “F.T.F.” hugely prompts thoughts of the soothing dark echoes of Storm Queen’s Morgan Geist.

With these mantras, Alfons offers commentary on social and sexual despair, tracing some kind of narrative on urban survival and self-directed frustrations. Creepy and sexy at once is “This Ready Flesh,” where Postepski’s voice makes an appearance. It’s a nihilistic dance track that gives off a stalker vibe and talks about a “hand in a strange hand,” “my favorite kind of love” and “photographic alleys.” By the track’s end both Postepski and Alfons announce that they believe in nothing. The deeply melancholic melodies come out of the smoke on previously released tracks “Candy Walls” and “The Last Dregs,” now fleshed out and filled-in. The sun comes out for about seven seconds on “Heaven.” “Heaven” opens with huge rippling synths that sneak back in and out of the gothy propulsion. But don’t fool yourself, it’s more narcotized heaviness from “Heaven” on out.

Okay so we’ve established that the dead, truly, can dance but what else is interesting about Trust? These guys make careful music. It’s important to take note that this is what will ultimately set them apart from other talented musicians following witch house sounds that are of the moment and nothing more. TRST is for those who thought Pictureplane’s resurrected goth-jams didn’t get weird enough and for those who wished Light Asylum would become a more two-dimensional. Trust me guys, Trust is not fucking around.