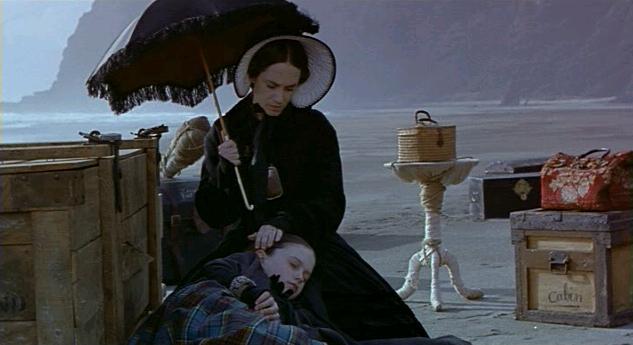 My initial experience with Jane Campion involved the bookends of her career thus far. I watched Sweetie, her delightfully demented feature debut from 1989 shortly before seeing her breathtaking 2009 biopic Bright Star. Tonally, the two films couldn’t be more different: the former a pitch-black psychosexual comedy, the latter a calm but subversive period picture that subtly reconfigured practically every facet of the period biography film. But both were such aesthetic pleasures that I knew I needed to check out Campion’s most famous work, 1993’s Palme D’Or-winning The Piano. For some reason, this took about three years.

What made Sweetie and Bright Star so striking to me was Campion’s quietly radical style. I hesitate to call it a “female gaze,” but there’s something inexplicably feminine about her direction. Whether it’s her use of odd angles and varying focal lengths or the less noticeable arrangement of mise-en-scène, Campion consistently avoids any traditional mood or interpretation. Her viewpoint is so off-center that I’ve yet to be able to articulate the relatable but unorthodox emotions conjured by her camera.

The same holds true of The Piano, which opens in blurry soft focus as the camera takes the point of view of the protagonist, Ada McGrath (Holly Hunter), who is peering through her fingers. Ergo, the first shot of the film is literally from a woman’s perspective, a placement solidified by the voiceover, which gives the audience, and only the audience, the inner voice of a mute. 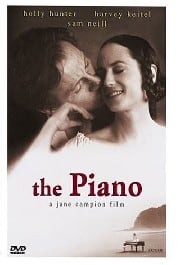 The Piano starts simply enough, with the quirk of Ada’s self-imposed muteness vaguely recalling Bergman’s Persona and her pure love of piano playing clearly established as a universal form of expression. But when Ada’s father arranges for her to be sent to New Zealand to wed a rancher named Alisdair Stewart (Sam Neill), the film slowly piles on oddities that toy with that expression in ways that relate to gender and ways that do not.

The one image that stuck out to me most in The Piano was the recurring sight of fingers in synecdochical close-up. After sailors deposit Ada and her daughter Flora (Anna Paquin) onto a New Zealand beach and leave them there, Ada comforts herself by snaking her fingers through a crack in the box holding her piano to play some reassuring notes. Later, such close-ups carry an erotic quality to them as Ada plays for Alisdair’s friend Baines (Harvey Keitel). Keitel even gets a close-up of his own fingers, his dirty nail gingerly tracing the outline of a hole in Ada’s stocking as she plays.

Speaking of eroticism, I was reminded of Sweetie in the casual handling of nudity in the film. I’ve never seen a filmmaker demystify sex like Campion, even as movies like this and Sweetie communicate more emotional turbulence from sex than those of nearly any director I can think to name. Amusingly, Campion frames nudity in graceful long shots except for when she uses a man’s perspective, at which point she begins chopping up the shots into male-gaze familiarity.

Those occasional dips into the more traditional, male POV make the rest of the film that much harder to place. I was grateful, therefore, when Campion shows a Christmas pageant telling of Bluebeard, clarifying the basis of the film’s larger narrative and setting up the shocking developments of the film’s last act.

The nature of those horrifying events recalls the more outlandish moments of Sweetie, but The Piano generally reminded me more of Campion’s biopics An Angel at My Table and Bright Star. Both of those films featured their own cruel twists, but they were sublimated into more formally pristine pictures that nevertheless operate on their own axis. Indeed, the acts that upend The Piano are less inherently shocking than the ways in which they are framed. When Alisdair reaches his breaking point, Campion films him in long shot from a low Dutch angle, playing up the traditional framing of a monster but leaving such a critical distance that gulfs of the man’s rage can fill the space around him. Conversely, Campion frames his act of revenge with a dissonant cutaway close-up that more perversely communicates the effects of his wrath than the usual displays of violence.

Shots like these make Campion more than just a feminist director to me. Though her cinema routinely critiques the chauvinist default format of filmmaking, her singular, vivid palette of expressions divorces her from a clear agenda. When Baines strips naked and wipes down Ada’s piano, the sexual connotations are obvious, but the simple tenderness of his cleaning conflicts with the lustful implications of the action and prevents any easy interpretation of intent. And when Campion uses that aforementioned male POV shot of Alisdair spying on his wife’s infidelity, the director comes to resemble Brian De Palma more than Catherine Breillat, who would make her own version of the Bluebeard story down the road.

Though I would still argue for the superiority of Campion’s An Angel at My Table, I can see why The Piano might have caused such a stir upon its release. At face value, it’s more accessible than her other movies, less confrontational in its structure and subject matter. But that only gives the audience the illusion of comfort, which draws them in until it’s too late to fight the mounting sense of unease with the unfamiliarity of Campion’s direction. The Piano may not be Campion’s masterpiece, but it’s the film that best clarifies the director’s far-reaching aims and abilities, even if it doesn’t make them any easier to accurately name.

Boris and Merzbow team up once again for another exciting, dynamic collaboration that brin…