Even the name is legendary: Scarface. It’s an enigmatic and yet straightforward name: overwhelmingly symbolic yet literal, based in true history yet evoking a fantasy of pinstripes, power and greed. It famously has its origins with Chicago crime lord Al Capone, perhaps the crime figure most represented in cinema that is not also named Corleone, but before The Untouchables and Capone, there was Scarface (1932). The source of innumerable tropes of gangster films, the Howard Hawks-directed, Ben Hecht-written (and produced by somebody named Howard Hughes) film is a landmark in cinema, a brilliant film that transformed true events and legend into vivid visual poetry. But the 1983 remake helmed by Brian De Palma? Not so much.

Although it was initially greeted with mixed reactions, the nouveau-Scarface has grown to be a kind of cult film, albeit the type described as such by people who don’t know what “cult film” means. After all, a movie directed by a New Hollywood leading light, starring one of the most lauded actors of a generation and earning nearly three times its budget in box office receipts isn’t exactly The Rocky Horror Picture Show. But it’s not that Scarface has grown to be loved only by a few; it has become obsessive to many. Most notably, it’s a touchstone of gangsta rap, to the point that re-watching the movie is an exercise in notating what dialogue was sampled for which Wu-Tang track or what scene Nas was referencing in Illmatic. It’s also somehow come to be esteemed as a notable movie of De Palma’s and one of Al Pacino’s most iconic roles. And here’s the thing: it is simply not a good movie. 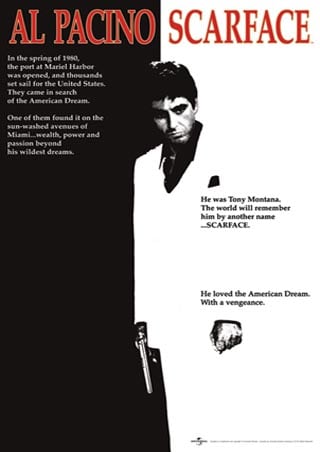 Despite the love of rappers everywhere and film critics desperately wanting to use it as a crutch to skewer the excess of the 1980s, Scarface is overlong, preachy and heavy-handed. And I don’t lay the blame on De Palma, who theoretically should be in his element by examining the psyche of a psychologically ill obsessive, as he did in Sisters, Blow-Out or well, most of his films. The real villain of this piece is a certain outspoken filmmaker named Oliver Stone. Prior to his directorial breakout film Platoon, Stone was merely a Hollywood screenwriter with an Academy Award and a wealthy family to finance his two drop-outs from Yale. While his admitted heavy cocaine addiction during the writing of Scarface may have added some verisimilitude to the film, it also brings the typical downfalls of dealing with a cokehead: the film is overblown and convinced of its own importance. While De Palma (along with cinematographer John A. Alonzo) shot the movie starkly, but with an eye to show off the gauche splendor of Miami, Stone’s story luxuriates in its own redundancy. At several points throughout the film, the titular Tony Montana (Pacino) is told outright that if he doesn’t fly straight, handle his business honestly or, say, not snort mountains of his own yeyo, he’ll end up poorly. And whaddya know, after a moral caution being baldly stated repeatedly, it comes true!

In terms of subtle storytelling, it’s about as on point as a lone traveler being told to stay away from the spooky haunted house, yet it’s rarely pointed out that Scarface is a rigidly moralistic movie. While the intense violence (which is frankly tame in an age of Inglourious Basterds) and drug use have given the movie a reputation of moral ambiguity, Scarface is about as ham-fisted as a “Just Say No” PSA. At no point is there anything but shrill cries of “Tony is bad, he will come to a bad end,” coming from basically every significant character. Does his mother think he destroys everything he touches? Well, screw organic dialogue, she’ll repeatedly yell it at him. Does his boss Frank (Robert Loggia) have a credo about how to do business? Then it’ll get repeated in at least three different scenes. Is there any way to tell that Tony is a bad guy? Just in case you’re not sure (because of all the murder), there’s an extended scene in which Tony literally shouts “I’m the bad guy!” to a room full of people and keeps yelling it even when he’s off screen.

And if three hours of preaching that being bad means bad things happen to you aren’t enough, Scarface also has zero character development. A key element to being immersed in a story is learning more about the people in it, who they are and who they become. But in this movie, people are pretty much the same throughout the entire plot. Tony begins the movie as a megalomaniacal, power-hungry scumbag, and he ends it that way. Ditto his wife Elvira (Michelle Pfeiffer), who is introduced as a cold, distant cokehead and gradually transforms into a distant, cold cocaine abuser. You can pretty much state this about any character in the entire movie; every single person essentially is given a defining characteristic, and that’s it for them. It’s a movie full of stick figures and cardboard cutouts. While Scarface is often taken to be about the American Dream and how it can be soured, a story like that requires growth. It requires someone to be innocent, for a dream to be perverted and devalued through greed and excess. That’s not this movie. At its core, Scarface is an overly simplistic morality tale, one that pretends to an epic quality through its own excess. It may reflect the character of its protagonist, but that doesn’t make it a good movie.