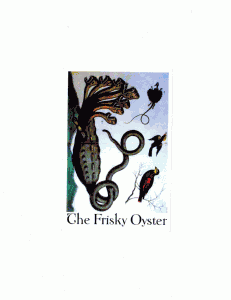 If ever there were a night not to go out to dinner… Gale force winds, squalls to match the intensity of the gusts and plunging temperatures that were an anomaly on the heels of a disturbingly mild winter. My wife and I remained committed though. Anytime you have a babysitter locked in and the chance to steal a few hours together to remind your collective self that you still are in fact still a collective self outside of being mommy and daddy, you do it.

What better venue to rekindle that feeling than one named the Frisky Oyster? If ever there was a restaurant that should go directly to the hall of restaurant name fame, the Frisky Oyster is it. I’m living proof of its power. Holding anchor in the middle of the main drag in Greenport, arguably the most popular of the many charming towns that dot North Fork on the end of Long Island, we’ve walked past the restaurant’s picture windows to witness raucous summer crowds on more than a few occasions since it opened in 2008. It’s a tribute to their inspired naming choice that on a stormy winter night, the first thing out of my mouth as we pondered where to eat was, “How bout the Frisky Oyster?” It just rolls off the tongue.

The reality of operating any business on the North Fork though, is that those raucous summer crowds give way to an off-season that can be described as exceedingly slow on a good day. Tumbleweeds would not have been out of place on that ugly night as we made our way into the chic, rectangular dining space, fronted by a small bar. It’s a test of the measure of any establishment whether they are able to rise to the occasion when the conditions are less than desirable. How do you react when things are slow? Do you wallow in it, sullen from the lack of action, or do you treat your guests to truly special experience because you have the time to go the extra mile?

The Frisky Oyster underwhelmed, given the circumstances. The waitstaff was indifferent, the food was uneven and the malaise was palpable. For a chef with the pedigree of owner Robert Beaver (CIA graduate, tour of duty at the Inn at Little Washington), this is inexcusable.

There were a few highlights though, hints of the potential that the kitchen certainly has. Crispy sweetbreads, served as an appetizer with a side of harissa tinged aioli, tasted like chicken nuggets only if they had been touched by God, blessed by the Virgin Mary and delivered by cherry faced cherubs on a golden plate. They were THAT good, perfectly cooked and devoured by the two of us. The chocolate pot de crème we split for dessert was equally heavenly, only this time graced by the divine presence of Aldo’s espresso. Aldo’s has been a Greenport institution since the mid ‘80s, serving artisanal espresso and biscotti down the block from the Frisky Oyster way before describing something as artisanal was considered cool. Adding his espresso to anything will invariably make it better.

The rest of the offerings that came out of the kitchen were wildly uneven, sometimes even in the course of a singular plate. A salad of roasted pears and arugula benefitted from a mere cameo appearance from the pears. An entrée of seared duck breast, served atop a sweet potato puree and sauced with a port wine gastrique was all too sweet, and the acidity from the gastrique couldn’t get the dish over the hump to cut through that. In fairness to the kitchen, the duck was seared and sliced perfectly but its partners failed to do that bit of technique any justice. Another entrée of seared scallops with lemon rice faired better. The scallops, again cooked perfectly, were served with a light side of rice flecked with lemon zest and sautéed bok choy. Also gracing the dish was sautéed bell peppers, not advertised on the menu, much to my pleasure and my wife’s dismay. There is no one who has a bigger distaste for bell peppers than my wife. Raw, sautéed, roasted… it makes no difference. It almost ruined her night, save for the two “girly drink” cocktails ordered from an interesting cocktail menu and, in her words, “…delicious. They almost put me under the table. Almost.” We switched entrees, all was rescued and her only remaining demand was that we double check the menu to see if the peppers were listed on the dish (they weren’t). For the record, I thought the scallop dish was fine, peppers and all. Not transcendent, not terrible but good enough.

I don’t think “good enough” is what the staff of the Frisky Oyster is shooting for though. I don’t think “good enough” is what has drawn in those packed summer crowds either. I also think that with a little more attention to detail this review would be a lot more positive: making sure to check on the table and pour the water when there are only eight people in the dining room, finding a way to balance that duck dish. Sometimes it comes down to maintaining a positive approach even in the dead of winter when the crowds might not be there, because when the intangibles go by the wayside, the food has a nasty habit of following suit.