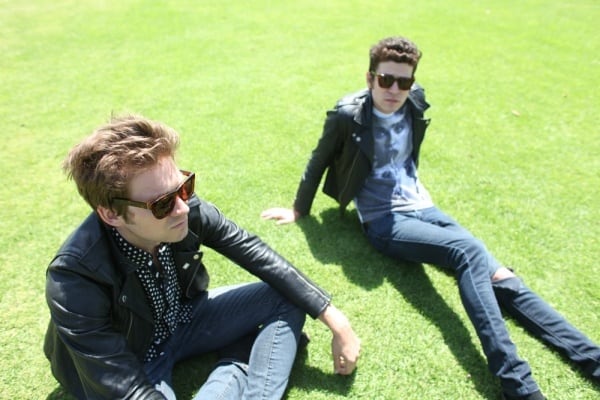 Of late, Portland’s ever cozy Doug Fir Lounge has been having sound and monitor level difficulties. The live ambience of the space itself, which resonates intimately during generally quieter sets, can verge on cacophonous when a band containing more than two guitarists or four members takes the stage. And since the effect is largely magnified or lessened by the performer’s genre, usual mellower suspects like the Clientele sound fantastic in the ‘Fir’s basement venue and even acts with a few rough edges (the Fresh & Onlys, Woods, the Cave Singers) come out mostly unscathed, whereas any attempt at bombast – say, the eight-piece touring orchestra Dan Bejar of Destroyer dragged around last year in support of Kaputt – is a recipe for trouble. So it was only inevitable that psychedelic drone pop outfit Crocodiles (San Diegan multi-instrumentalists Brandon Welchez and Charles Rowell in name but a quintet on tour), inclined toward sustained squalls of feedback and squalid noise, reverb and incessant fuzzwork, might be at some risk.

But I admit even I was surprised when Welchez, after trying to work through issues with his vocal levels in the house mix through the first part of their set, began walking offstage repeatedly 25 minutes in and then cut the show short at seven songs. For a time the group (Rowell’s guitar and Welchez’s vocals rounded out with keys, bass and drums) attempted to push through, blankly stoic-looking in all black outfits – a starlit palette of skinny jeans, leather and peacoats. From the start noise overwhelmed the mix, though, even amid the straightforward, heady strains of material from their forthcoming album Endless Flowers with which they led off. Four drone-heavy turns of stomping and jagged bass, prodding guitar slashes and crashing percussion later and it seemed Welchez was becoming increasingly less convinced his mic was live, even borrowing another member’s at one point. Negotiating at a distance with the sound guy eventually proving fruitless, he abruptly stalked off the stage midway through the fifth entry in their set, leaving the rest of the band unsure of his return as they continued playing.

After Welchez’s temporary return, a brief showcase of discordant harmonies, charging guitar and monstrous gospel, the ‘60s cadence of “I Wanna Kill” and a crunchy, groove-laden and bass-led take on “California Girls,” Crocodiles summarily – and collectively – left the stage, the lights went up and a disappointed crowd made their way for the exits. (At least the truncated concert gave to drunken audience members the benefit of still being drunk by the time the set concluded.) As both are multi-instrumentalists and the sounds on their releases run the gamut from shoegazer veg-outs to sun drenched LSD pop to punky aggro blues, it’s understandable why Crocodiles would bring in three players to bring their full-figured aural range to bear on tour. It’s unfortunate the marriage between their sound and the Doug Fir’s capabilities was not a happy one that night. The next morning Crocodiles even tweeted, “Portland thanks for your support thru those horrible sound issues. Sorry we had to cut it short. We’ll be back soon to play a perfect show.” But not at the Doug Fir, perhaps.