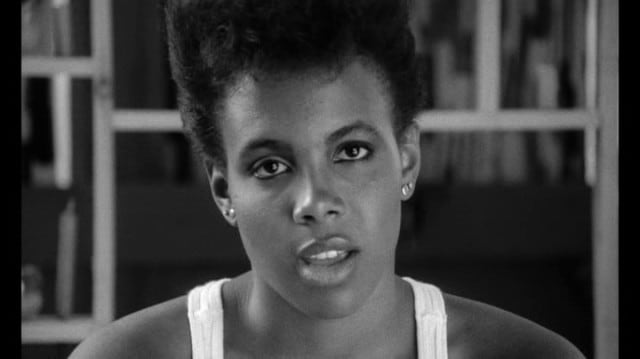 As difficult as it may seem now, there was a time when Spike Lee was less of a cultural provocateur than he was a black New Wave icon, a director as concerned with experimental verité framing as he was urban confrontation and class struggles. To that end, She’s Gotta Have It wasn’t just the film that brought Spike Lee into the conversation about modern American independent film, it was the film that brought blackness on the whole to the center of that conversation, arguably acting as the impetus for similarly culturally minded auteurs like Robert Rodriguez, and helped encourage urban art to be taken with an intellectual grain of salt.

As debut feature length films go, She’s Gotta Have It is remarkably committed to its subject, in this case the sexual and class struggles of Nola Darling (Tracy Camilla Johns), a hip twentysomething black woman. Darling stands out even today as a black character whose struggles are not against vague, omnipotent authority figures or violent rivals but instead her own identity and the expectations her own culture has foisted upon her. Darling seeks to obtain the freedom she perceives her male peers to have, specifically the right to pursue as many sexual partners as she desires, regardless of class stature or even similarities in personality. The film is initially told from the perspective of three of her would be suitors, with Mars Blackmon (Spike Lee, debuting one of his most famous characters) representing the most urban, street level identity while Jamie Overstreet (Tommy Redmond Hicks) and Greer Childs (John Canada Terrell) stand in for the middle and upper classes.

Lee bravely allows the film to be framed in a way that is unsympathetic towards his protagonist, with each of these suitors commenting on Darling’s deficits and defects, even as they clearly continue to fall for her more and more. At first this makes Darling seem harsh or even imbalanced, with Mars and Jamie in particular standing the most to gain as they are mistreated by Darling throughout. Only Greer stands out as a universally maligned character, a figure that every other person in the film can rally against and declare unworthy. But as the film continues, even the seemingly obvious “best choice” Jamie reveals himself to be self-centered, only out to make Darling submissive to his own desires, culminating in one of the film’s darkest, most shocking scenes, as he rapes her in retaliation for what he feels is her manipulation of his emotions. And only in the final moments do we even begin to get a glimpse at what Darling’s own perspective is. 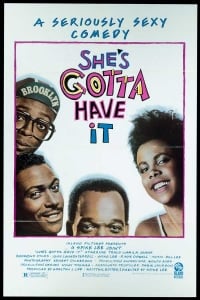 With all of its big ideas, She’s Gotta Have It may be said to suffer in quality due to Lee’s decision to use mostly untested actors for the cast, including members of his own family, but it also imbues the film with a radical realism in scenes like the one described above. Lee’s cast isn’t just performing this class and gender war, they come across as people actually living through it, all too aware of what’s at stake and what it feels like to suffer through it. Hicks arguably has the most difficult role in the film, forced to maintain a strict balance between sympathetic and likable and overwhelming, particularly as the film progresses and his frustrations become clearer. Lee by contrast gets off easy with lovable goofball Mars, who would become so popular that he would wind up in Nike ads.

But it’s Lee’s script and direction that emerge as the true star in this debut effort, as he makes some surprising decisions in how to present this decidedly city-based story, working in elements of French New Wave cinema as well as the No Wave scene that included Jim Jarmusch and had been favorable at the time. Lee spends a considerable amount of time focusing on his characters’ expressions and posture, honing in on the details of their faces from untraditional angles, carefully following their movements across each other’s bodies and deliberately contrasting New York City itself with the battles and conflicts being waged within these characters’ beds and rooms. Similarly, Lee experiments in ways that remain unique to his oeuvre, like a brightly colored dance sequence that appears in the middle of the film, a stark juxtaposition to absolutely everything else that happens around it, almost like a comment on excess and aesthetic. That it focuses on a sensual, dramatically charged dance isn’t a coincidence.

For all the acclaim it received at the time and its status as the work that launched Lee’s career, the sensuality of She’s Gotta Have It seems to have been forgotten in favor of the sometimes obvious racial politics Lee puts forth. As surprising and clever as a sequence in which the characters sit around a Thanksgiving meal and argue the merits of dark versus white meat may have seemed at the time, it now seems quaint and blunt, while sequences where we’re witness to the different ways Darling’s suitors approach her body remains shocking in its lack of inhibition and decidedly arousing framing. These scenes are also of special relevance to the film as they show a commitment by the director to the body politic that acts as the central theme of his protagonist’s narrative.

Lee would never quite leave the world he shows off in She’s Gotta Have It, but he also never exactly returned to its bedrooms, either. Brooklyn would forever loom large over the director’s canon, as much a character in his works as any of its human counterparts. But She’s Gotta Have It remains of particular interest because of how intimately it details the way sexuality, class and politics all converged in this particular era, like a late 20th century update to La Ronde.