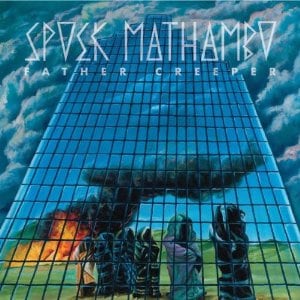 [xrr rating=2.0/5]Spoek Mathambo, as well as his sophomore release Father Creeper, defies the typical pigeonholing of genre markers that usually ground a critical music review. The singer, with his roots in Johannesburg and an arsenal of sonic tools to rely on, delves readily into punk, reggae, electronica, Afro-pop, techno and countless other influences. It’s that sort of genre globetrotter mentality that made his debut record Mshini Wam such an indulgent and fascinating listen, as one had to marvel at the playfulness and confidence with which Mathambo transferred the African musical tradition into a world of European dancehall and Western pop influences.

That same confidence seems to have vanished with the release of Father Creeper. There’s little here to endear us to Mathambo’s eclectic style, as most of it comes across as scattered, uninspired globalism rather than a meaningful incorporation of multicultural influences. Opener “Kites” barely slogs out of the gate, its off-kilter, video game blips and fuzzy synth line failing to create any sort of motion or intensity, instead lying flat while Mathambo’s vocals hardly register. His voice is a significant detractor throughout, as he can’t seem to settle into a comfortable groove, bouncing between franticly rapped verses and more melodic bridges and breaks. That’s never more present than on “Venison Fingers,” where his mix of dub and crooner-style vocals create a dissonant and dull effect; the frantic analog punches throughout the arrangement only make matters worse. “Skorokoro” incorporates a heavy dubstep feel, dropping out the mids and delivering a heavy bottom end, but the lack of melodic sensibility and a lackluster vocal delivery leaves this arrangement floating in space, collecting dust rather than gathering momentum.

Much of Father Creeper works in the same vain, struggling to find a singular, unique voice. Comparisons to M.I.A. and TV on the Radio have followed Mathambo since his debut, and he does little here to escape from the shadows of such influences and establish his own creative purpose and vision. “Stuck Together” employs a strange alt-rock formula, mixing jazzy riffs with overdriven power chords, while “We Can Work” is a messy piece of electronica meets funk, never delivering on the promise of its glitchy opening riff. “Dog To Bone” boasts some minimalist-industrial groundwork with tinges of Caribbean guitar – and a reverb-heavy guitar riff eerily similar to that from U2’s “With Or Without You” – but the soundscape still feels empty, despite the assorted elements present.

The sonic mess that is Father Creeper is a real shame because, lyrically, Mathambo has a definitive, unique and staggering message. “Put Some Red On It,” which touches on the mining and violence associated with blood diamonds, contains this haunting couplet: “Your mama belly-gutted, hollow flies fill her up/ Her lips blood-stained, throat raw from throwing up.” This record is filled with such disturbing moments of neglect, inevitability and injustice, but the unfocused sonic forces overwhelm the message, obscuring it in a way that is neither ironic or a meaningful contrast of form and content. “Let Them Talk” is the only song that really stands out, its P-Funk beginnings unraveling in a haze of guitar ferocity. It’s a track that musically embodies the fury and pessimism that permeates Father Creeper; a few more tracks with this much vigor, anger and purpose and we would have been talking about a completely different album. Instead, we’re left with a distracted collage of styles, voices and creative directions that never find the time to coalesce into an evocative whole.