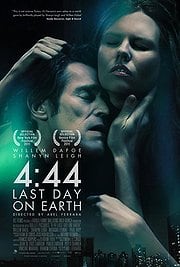 [xrr rating=4.25/5]One of last year’s major films was Lars von Trier’s Melancholia, which depicted the end of life on Earth. This year, Abel Ferrara’s apocalyptic drama 4:44 Last Day on Earth deserves, but probably won’t get, similar attention. Despite some similarities, including most curiously ending on a fade to white, these are two rather different films. They have perhaps little to say to one another but a lot to say to us. What they do have in common, most importantly, is their consideration of the apocalypse as a metaphysical phenomenon. But if Melancholia is rooted in individual suffering and depression, then 4:44 is fundamentally a film about humankind’s collective relationship with the cosmos, the great silence that drives us to understand the meaning of our own existence. Ferrara makes this apparent by weaving in images from various religious traditions, but you don’t exactly need these to understand Ferrara’s deep affection for humanity. In making us observe the behavior of a group of people during the last day on earth, Ferrara forces us to witness the best and worst of humanity, but he embraces these two sides as necessary aspects of what makes human life, in the face of obliteration, worth cherishing.

Apocalyptic fictions are not likely to disappear anytime soon. The state of the world today calls for them in unique ways. In Melancholia, the end of the world functions as the premise for a meditation on the worthiness of annihilation. The protagonist Justine (Kirsten Dunst) refers to the world as evil, and though we are not meant to take this literally, the accusation prompts us to question just how much we might agree with it. In this way, and by externalizing the individual’s chronic depression onto the world, Melancholia allows us to experience the apocalypse as a purgation of everything that terrorizes us. Ferrara’s vision is more microcosmic. He is content to accept that Melancholia’s pessimism is at least partly right, but he is less interested in judging the world as a whole and more interested in observing the behavior of those in it. Much of the interest in 4:44 comes from suddenly realizing how fascinating it is to observe the behavior of people who know the entire world will be wiped out in a day.

In his book about Ferrara, Brad Stevens writes that according to the director’s vision, “the ability to be in a constant state of moral and emotional flux is a prerequisite for the achievement of full humanity.” This state of flux is precisely what results from knowledge of impending annihilation in 4:44. Some habits continue unabated: when the protagonists Cisco (Willem Dafoe) and Skye (Shanyn Leigh) order Vietnamese food, Cisco pays the delivery boy (Trung Nguyen) as he normally would, then pauses before giving him an enormous tip. Why not? Money won’t mean anything in another 24 hours. Skye, an artist, continues with her painting throughout the film as if to preserve a sense of calm in the face of the inevitable. Skye and Cisco have sex and take time to meditate. At one point, they get into a heated fight, which seems utterly pointless—what value can there be in working through the issues in a relationship that won’t even exist the same time next day—but also a testament to our ability to care deeply about such issues despite overwhelming crises, never giving in to complete nihilism.

As it probably sounds, this kind of flux championed by Ferrara is not easy to maintain. As a way of life, it’s draining, but Ferrara’s cinema is also one that is uniquely alive. A few moments in 4:44 are truly heartbreaking, making it nearly impossible to hold back the spontaneous outpouring of tears. In one scene, Cisco lets the delivery boy use his laptop to Skype with family members back in Vietnam. We witness their conversation without subtitles, but we don’t need to understand what they are saying: at the end, the delivery boy, his face expressing awe and anguish simultaneously, gently presses his hand to the screen, touching the face of the woman there and then slowly closes the laptop. This is the last time they’ll see each other. Skype is used frequently by Ferrara, who treats it as a kind of magical device, a portal opening up connections between far-flung individuals. Cisco uses it to communicate with his daughter from another relationship, and when she mentions how a friend lamented that she’ll die a virgin, Cisco breaks down into tears, an emotional transition handled masterfully by Dafoe, whose face registers the dawning of compassion for all of life’s suddenly impossible moments from which he and everyone else are now deprived.

Frequent references to Buddhism throughout 4:44 give some hints into Ferrara’s own vision of his essentially compassionate film. Buddhist monks have been known to meditate in cemeteries, visualizing their inevitable death and decay in gory detail. An oft-ignored feature of apocalyptic fictions is the fact that we, as audiences, are protected from their characters’ fates. To witness a film like 4:44 is not to put ourselves in the position of Cisco or Skye but to visualize and experience their emotional flux while retaining one foot in safety. Thus, 4:44 functions as an act of meditation in its own way, allowing us to contemplate not just the inevitability of our own death but also everything of value in our remaining life. Ferrara’s film literalizes the Buddhist concept of life’s impermanence, the realization that we are already fated to die one day, by putting a timestamp on it: the film’s characters are already dead but are holding on for one more day, like a check deposited but not yet processed. 4:44’s charged air, in which every action feels momentous, conveys what we already know but never acknowledge: each moment is one step closer to this inevitable fate, which we must courageously and humbly accept.