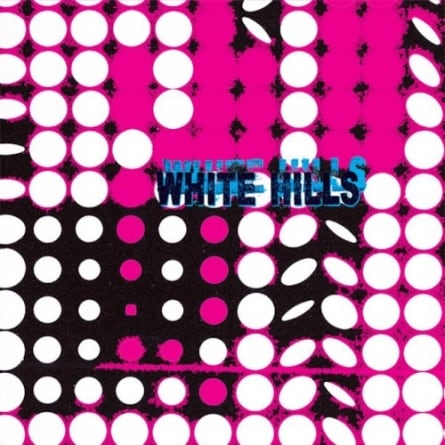 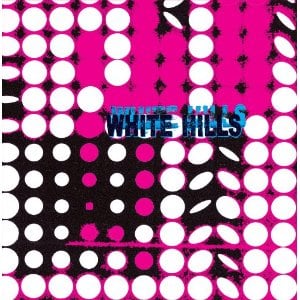 The new disc from White Hills, New York’s wall-of-sound, psychedelic-infused spacerock outfit, is highly explosive. As if not being able to contain themselves, they’re back with Frying on This Rock just after a live CD, a tour-only disc and last summer’s similarly massive guitar versus atmospheric synth battle of an LP, H-p1. Rock may be referring to Mother Earth or perhaps Mars, but whichever planet they are talking about, guitarist/vocalist Dave W., bassist Ego Sensation and collaborator/percussionist Antronhy (sic) are taking their sonic ambitions to deafening heights. Don’t be fooled by the short track listing either- there’s only five songs but these guys are comfortable playing for 12 and 15 minutes at a time, blasting your ears off with beaker-busting distortion and lightshow sized compositions.

It’s no doubt that producer Martin Bisi (Brian Eno, Sonic Youth, Swans) helped to harness the comets of this trio’s colossal vision. Less heady and thematic than their previous proper release H-p1, Frying on This Rock is the band getting loud and letting loose the cannons of their sound. They are flexing their doom-metal muscle mass with defiant volume this time more so than they are articulating their social and political frustrations, as they have done so more directly in the past. With the immediacy of a space rocket lifting off into the stratosphere, White Hills ignites into “Pads of Light” first with bursting guitars and barrages of percussion. The drum kit sounds as though it’s being dropped from a high place and then recorded and placed next to W.’s chugging guitar verses. Before unfurling into a mega-solo, Dave W. shouts, “Steps swirl on pads of light, steps swirl on pads on pads of light/ Takes me to closer to night!” With the girth of Ego Sensation’s bass scuzz and W.’s distortion box dial turned all the way to the right, you can picture the Capricorn One engulfed in faulty heat-shield flames or the Palomino spiraling off into deep space in 1979’s The Black Hole.

White Hills undoubtedly has a druggy sound that makes you think of a smoky room with Black Sabbath posters hanging next to purple lava lamps, but you don’t have to take acid to see what they see. “Robot Stomp” is fuzzy-wuzzy, meditative and instrumental. Equally as heavy as the rest of the disc, it balances out the more experimental and non-linear moments like those found on “I Wrote a Thousand Letters (Pulp on Bone).” The speedier pace of “Robot Fuzz” reflects the group’s love for metal, their sensibilities mathematical, symmetrical and just plain loud as the day is long with plenty of synthy weirdness to distinguish them as separate from total derivative musicians. It’s no wonder these guys are matched on tour bills with one of America’s loudest stoner-metal acts of all time, Sleep. White Hills has already accomplished a lot for themselves but are able to put out more music without having an inflationary effect on their discography. This Earth-sick, space bound treat from the East Coast’s post-rock threat is all killer and no filler. When you’re going this hard, this fast, it’s hard to slow down.