January 27, 2021
Home Food No Manwich Tonight And Other Ways To Improve Your Life: Pizza 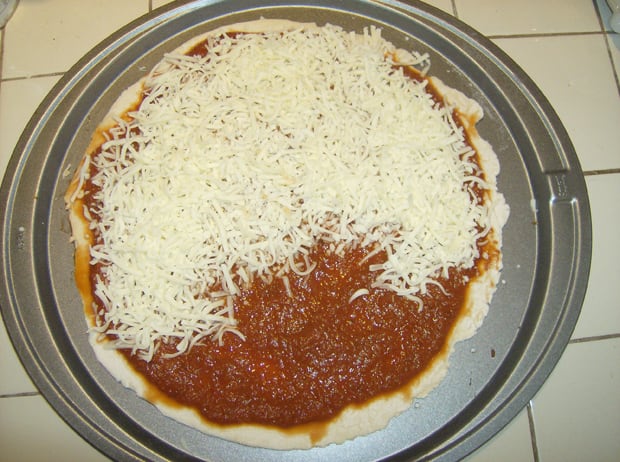 Stacey: Hey Tom, Help. I mean that quite literally. I think my microwave has achieved singularity. It beeps repeatedly as it pleases (as if in code!) and has elected to no longer respond to manual, human commands. It turns on and shuts off totally unprompted, which, although it pays out in nervous laughter between me and my boyfriend, probably somehow is endangering our lives. I swear I wouldn’t be shocked if I got home and found it inside the refrigerator or in my bed or something. So, two things: prepare yourself for the rise of the machines and secondly, I guess I need advice on how to cook actual food without the aid of microwave emissions. I only barely know how to do this, as I have spent much of my adult life clinging like a hungry barnacle to the hull of a Stouffer’s pizza boat. Surely these same foods can be made the old fashioned way, though I’m afraid it will involve more skill than peeling back film for venting purposes. Can you kindly usher me out of the frozen food aisle? At least until I scrape up $60 and get my bones over to Target?

Tom: All right Stacey, so my first reaction about recreating meals produced by the frozen-food-concern-that-we-probably-shouldn’t-mention-by-name-for-liability-reasons probably resembled one of those Hitler Downfall parodies that are plastered all over YouTube, only sans Hitler-stache and copious amounts of Nazis surrounding me. See, I’ve been conditioned to recoil at the mere mention of those types of frozen dinner concoctions. But then I thought… who am I? Within the last decade I couldn’t follow the instructions on a box of cake mix let alone pontificate on the proper way to mince an onion. And now, all of sudden, I have become someone who has serious opinions on the best meat to use to make a hamburger (ground chuck) or whether anyone should cook asparagus outside of the early spring season when they are good (they shouldn’t). I am a food snob. What a fucking disgrace.

My second reaction was going down a self-hate spiral, asking myself questions like, “How in the world did you become an anything-snob?” and saying things like, “If Stacey only knew what a jerk you were, she would never have volunteered to do this in the first place.” It was ugly; never underestimate a lapsed Catholic’s appetite for flagellating themselves with paralyzing waves of guilt over nothing. I had to find a way to pull myself out the spiral so I did what any sensible husband who craved perspective and had to be put in his place would do: I ran it by my wife. “Oh yeah, you used to love those things when we lived in our first apartment together,” said Aimee. “The French bread pizza and the stuffed peppers were your favorites.” Like I said Stacey, who am I?

Then, a revelation: I need you just as much as you need me. I’ve always wondered what other people’s reactions are to my hare-brained recipes. Sure I get some feedback here and there, but I’ve never had a captive audience of one who HAD to buy what I was selling. Or at least try it out. You, Stacey, can be that for me. It’s a win/win: I get to see if these recipes make sense, and you get to learn a few things about cooking along the way. It’s just what I need, another woman in my life to put me in my place.

So, speaking of trying things out, we should probably talk about cooking, no? This is a cooking feature after all.

Let’s start with homemade pizza as an analogue to the frozen French bread pizza of my old apartment days.

Combine all of the ingredients in a bowl. Once a ball has formed (it will be shaggy) sprinkle some flour on a countertop or cutting board and knead until the dough is smooth and elastic, about eight minutes. Wrap in plastic wrap and store in the fridge for at least an hour and a half.

Stacey: OK, easy enough. I added a few spoonfuls of water as I was kneading – the dough was not balling together very well, even in a shaggy way. I also found that eight minutes can be a long time, so I suggest measuring it out in CD tracks. I plucked Suzanne Vega’s Solitude Standing from the archives as my “handmade pizza” music – eight minutes will get you through “In the Eye,” “Night Vision” and then some. Singing “I would live inside you/ I’d make you wear me/ Like a scar” while manhandling a tough, yeasty ball of dough? Yeah, I think I just worked some things out.

Tom: I’d say so. That’s a million dollar book idea by the way… Kneading Therapy, subtitle: Working the Dough to Work Out Your Demons.

Place a large sauce pot over medium heat and add the olive oil. Once it’s hot, add the onion and fennel and cook until they are soft and almost translucent, about eight minutes. Add the red wine and let the alcohol cook off and the wine reduce, about five minutes after it has come to a boil. Add the tomatoes and let the mixture come back to a boil. Season with salt and pepper to taste (this means about one big pinch of salt and few grinds of pepper.) Transfer to a blender or use an immersion blender to puree the mixture. Set aside until the dough is ready.

Stacey: Fennel? Isn’t that anise, as in the black licorice stuff? I am raising a preliminary eyebrow at this. If this pizza tastes anything like off-brand Twizzlers I am coming for you and you won’t be pleased to see me. As I was chopping, it smelled like black jellybeans up in here but actually as I’m sautéing the fennel/onion mixture, I’m reminded less and less of the sadsack remnants of an Easter basket – it smells perfectly savory. And just like that I’m back on board. Also folks, you might want to let the sauce cool down significantly from boiling temperatures before blending, my blender was a little overfull and some of the sauce spurted out from the top during the puree. Oops and ouch and eye roll at self.

Tom: Fennel is your friend Stacey, embrace it. Also, if I ever suggest to anyone that they put black licorice on anything, may an anvil shaped dough ball fall from the sky and strike me down. Seriously, I hate licorice.

You will need all of the ingredients above plus 1-2 cups of shredded mozzarella.

Preheat the oven to 450 degrees.

Put the dough on a baking sheet.

Put as much sauce and mozzarella as makes sense on the dough, put it in the oven and let it bake for 10 minutes.

Stacey: Results! This pizza turned out respectably. Look at me, I even added some fancy artichokes! The sauce is awesome and does not taste weird despite my ill-conceived prejudice against fennel. I have a ton left which I assume is fine to freeze and use later. But I think I fucked up the dough. I was pleasantly surprised at how easy it was to roll out – and I dread rolling dough because it invariably sticks to the rolling pin or breaks apart or some such bullshit – so I felt like a star working with this stuff. However! It tasted too much like two cups of flour. My boyfriend chalks this up to: A) not letting it rest long enough for the yeast to appropriately activate or, more to the point, B) “Wait – you used OUR flour?” (as if there was another answer to this besides yes) “Well there you go. That same stuff has been in the cabinet for years. (chuckles) Yeah, that’s the problem.” I beg to differ about the timeframe, but not by much.

Lessons learned? Give fennel a chance. Suzanne Vega herself would probably not endorse Solitude Standing as a pizza-making record. Update your flour supply should the last time you used it date back to the great Thumbprint Cookie Frenzy of 2010. Wait for things to stop boiling before messing with them.

Thanks, Tom! You’re not a fucking disgrace by any means. Your snobbery enriches me. See you again soon? Maybe we can tackle our shared love of stuffed peppers.

Tom: Glad I could be of some service.