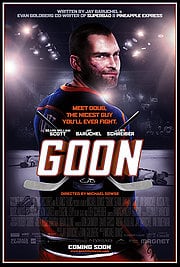 [xrr rating=2.0/5]There may be less fighting in professional hockey today, down 25% in 2012 according to a report in USA Today, but someone forgot to the tell that to Jay Baruchel. In Goon, the comedy which Baruchel co-wrote, co-produced and co-stars in, hockey itself doesn’t matter, just how much blood can spill out on the ice.

Seann William Scott plays Doug Glatt, a stupid bouncer who realizes his true-calling as a hockey enforcer. In a swift prologue Glatt goes from the embarrassment of his rich Jewish parents (Eugene Levy and Ellen David) to a popular player after standing up for his gay brother during a minor league hockey game in Orangetown, Massachusetts where he, as a fan, fights a player. He is soon hired by the local team and then tasked to travel to Halifax where he will serve as primary protection to Xavier LaFlamme (Marc-André Grondin), a former top prospect who has been off his game (aka fucking skanks, doing drugs and ignoring hockey) since being knocked unconscious by legendary enforcer Ross Rhea (Liev Schreiber). Baruchel has a bit part as Glatt’s Masshole buddy and luckily that move to Halifax keeps his annoying character off the screen for long periods at a time.

Since Goon is essentially gearing up for a Glatt/Rhea showdown, the rest of plot really doesn’t matter. The Halifax Highlanders are a ragtag crew that hasn’t won a game until Glatt comes along and acts as the unconscious glue that binds them together. Director Michael Dowse spends no time on Glatt’s teammates at all, allowing us to identify each of them by a single stupid trait or another: the old, divorced guy, the painkiller-addicted goalie, the Asian dude, the Pollyanna, the obnoxious Russian dude, the other obnoxious Russian dude. Who really cares? Just like the fans in the arena, we just want to see Glatt bust people up.

So Glatt realizes he’s good at fighting, but who really cares? Scott tries his best with the material but he has been abandoned by his team on this one. Sure, some teams get by on star power alone, but not Goon. Remember, there were three Hanson brothers (and I’m not talking about those little “MMMBop” shits). Goon doesn’t equal the funny of one of them.