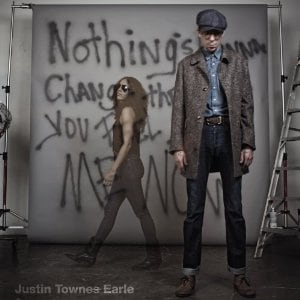 [xrr rating=2.0/5]It took Justin Townes Earle some time to find his own voice, to step out of the long shadows of his father, Steve Earle, and a certain legend he shares a name with. In 2010, he delivered Harlem River Blues, a consistently stirring roots-rock record that featured touches of Elvis and Muddy Waters, but found his own message amidst the handful of influences. Though equating nationality with a specific sound is a futile (and often lazy) way of describing a record, there was something about Harlem River Blues that sounded truly American; and not in a patriotic, flag-waving type of way, but in a down-to-earth, modest, back porch kind of way. It was a refreshing take on spirituality and humanity that never fell too far into cliché or melancholy.

The same can’t be said for Earle’s follow up to that record, Nothing’s Gonna Change the Way You Feel About Me Now. The longwinded title says it all, really; despite its 30-minute runtime, this record feels like a lifetime of sadness and despair, never offering a glimmer of hope or even suggesting something meaningful about the depression it’s so entrenched in. Opening track “Am I That Lonely Tonight?” sets the tone for the record, sounding immediately glossier than his preceding albums and employing soft horns, female backing vocals and a slight guitar lead. It’s an inconsequential beginning, a non-starter on a record full of them. The bubbly Hammond organ and punchy guitars of “Maria” betray the heartbreak at the core of the song, resulting in a mild-mannered alt-country tune that contains none of the insight needed to pull off a ballad and never enough energy to exceed its detrimental complacency.

Harlem River Blues succeeded on the fact that Earle was able to sound both indebted to his genre ancestors while also bringing in a fresh perspective on the tired themes of love, lust, God and death. He sidestepped generic pitfalls with grace, the opposite of what he does here. Most of this record is tiresome in its loungey feel, sounding like Dan Bejar without the cryptic lyricism or irony. Earle just sounds self-righteous and worn out – traits that could benefit the downtrodden lyrics if they weren’t such broad evocations of universal tropes and clichés. The result is a record that feels cold and impersonal, which stops the album in its tracks, because without great songwriting – Earle has shown quite a few flashes of lyrical poignancy in the past – this is just another retreading of country and folk’s oldest conventions. Over a laidback sax on “Down on the Lower East Side,” Earle sings, “So there’s a star up in heaven/ Shining down from up above/ And the city’s unforgiving/ When you’ve got no one to love” – lyrics that may as well have come from a Beginners Guide to Country Songwriting. “Memphis in the Rain” sounds just as one would expect, a modest country ditty that touches on life on the road, the lovers left behind and the inevitable heartbreak that comes from such a life. It’s well-tread territory; Earle has nothing new or inspiring to add.

The backing band throughout the record sounds lifeless, stale, as if they’re no more than a set of studio musicians awaiting their takes, adding the occasional bit of slide guitar, saxophone, organ and piano. It’s not just the band though. Earle himself sounds comatose, delivering the musty metaphors with little emotion or insight. There’s nothing here to grab on to, to provide emotional or conceptual context. Instead, we’re left with a glossy surface that can’t hide the pitiful mechanizations at work. For a man who found his voice just two years ago, this is a significant step backwards into well-worn, tired nostalgia, minus the charm.