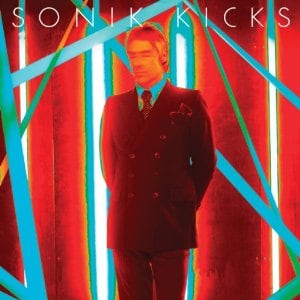 [xrr rating=3.5/5]At this point in his career, Paul Weller doesn’t need any more laurels, but I guess he’s fine with still getting them. The Modfather has been making consistently solid records since the late ‘70s, and though he remains a cult figure stateside, every single album of his has charted in the UK top 10 (with two of his last three going to number one alone). While many a fifty-something rock star might be fine with cranking out MOR music and making bank with oldies tours, Weller seems to have become increasingly unpredictable in recent years; an artistic resurgence beginning with the acclaimed 22 Dreams (2008) has kept him dabbling in genres, though rarely out of a certain comfort zone. His latest (and 11th solo) album Sonik Kicks finds him sticking to that same path, trying out subtle variations in familiar sounds.

But it would be quite a stretch to call Sonik Kicks an experimental record by any means. Weller long ago settled into a groove of hook-heavy rock with soul inflections (which is not an insult by any means), a sound that gives him the power of familiarity as well as a sort of eternal blueprint. On the other hand, it means much of the music he makes sounds relatively similar, not least because of his distinctively raspy vocals. But since the aforementioned 22 Dreams, he has been expanding his palette in slow circles, adding a new element here and a few unexpected instruments there. On Sonik Kicks, the most noticeable change is a healthy dose of Kraut-rock rhythms and electronic flourishes, but don’t worry, rockists. This is by no means a dance album or even one particularly heavy on the synthesizers; in the tradition of classic rock everywhere, electronic sounds are largely used in service of electric guitar and dense bass, complementing and accenting but rarely dominating.

Sonik Kicks opens with “Green,” and a wavering, almost atonal buzz of a guitar over a thumping beat, taking a moment of propulsive energy before Weller steps in with a cascade of multi-tracked vocals that pan back and forth between channels. It’s a deliberately strange, nearly off-putting opening track for an album that rarely settles on a tone, but it works all the same. “The Attic” follows on a much more traditional formula, one perfected by Weller long ago and just as lovely as it was days of the Jam: a sublime guitar hook, a heavy bass riff and a softly romantic chorus. But for the rest of the album, he skips between the deliberately poppy (“That Dangerous Age” with its girl-group style vocals), sinister rock (the pounding, organ-driven “Around the Lake”) and even odd tracks like what could only be called orchestral dub rock (“Study in Blue”). And after all that, he follows one of the strongest tracks, a crunching and string driven “Paper Chase” with the saccharine, space-y “Be Happy Children.”

It’s difficult to think that at this point, Weller has been a solo artist for nearly twice the time he was in the Jam and the Style Council combined. He’s proven himself a viable artist (and a restless one at that) many times over, and doesn’t really need to do anything now but make albums he himself enjoys in the kind of styles he enjoys. On that level, Sonik Kicks is a successful album, music made by a man still pursuing new accents in an old voice. Whether I’ll still be listening to it as often as I do All Mod Cons or Wild Wood is just up to time.