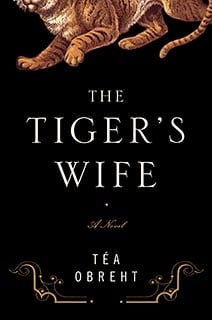 [xrr rating=3.75/5]The conflict in Yugoslavia during the 1990s may have been replaced in the headlines by terrorism and fighting in the Middle East but in Téa Obreht’s haunted debut novel The Tiger’s Wife, the Balkans play host to a series of fables and stories that may seem to stretch the fabric of realism but never quite enter García Márquez territory in their departure from reality.

Set in an unnamed Balkan country still shaking off the terror of civil war, The Tiger’s Wife is a showcase for Obreht’s luminous and sophisticated prose. Through the tradition of storytelling, Obreht examines the very nature of human conflict itself and creates a series of fascinating strands that never quite lead to a satisfying whole. But with writing this good, one can forgive some dead ends.

The story begins when young doctor Natalia Stefanovic travels to a remote town to provide medicine to an orphanage. The town reminds Natalia of her recently deceased grandfather, a looming and paternal figure in the young doctor’s history. A physician himself, Natalia’s grandfather’s voice dominates most of the novel, which alternates with Natalia’s struggle with life in the post-war Balkans and her grandfather’s fantastical stories of his youth. The war has dominated most of Natalia’s teenage years, giving her and her friends the right to act reckless. Why not speed and do drugs if bombs are going to come crashing down at any moment? Now that the war has ended, Natalia not only suffers from feelings of bewilderment but must deal with new prejudices as boundaries have been re-drawn and grudges remain to be nursed. During the war, Natalia also pulled away from her grandfather, a decision she regrets now that he is gone. As a child, Natalia and her grandfather would often go to the zoo and watch the tigers. Sometimes he would share his prized copy of The Jungle Book. While literal tigers remain invisible during the book’s sections in the present, they run free in the past, to which long sections of The Tiger’s Wife are devoted.

In the first section, Natalia recalls her grandfather’s stories of his boyhood. While growing up during World War II in an isolated village, a tiger escaped from the city zoo during a German bombing raid and made its way into the mountains that surrounded the town. As her grandfather becomes fascinated with the tiger, a beast feared by the townsfolk, he also learns of the young deaf-mute wife of the local butcher. Soon, the girl befriends the tiger, leading the villagers to call her “the tiger’s wife” and induce the ire of her abusive husband.

In the second story, one that is somewhat intertwined with the history of the butcher, Obreht writes in the grandfather’s voice. Here she chronicles his numerous encounters over the years with Gavo, “the deathless man.” Gavo appears during war and epidemics and predicts the deaths of people around the grandfather. Both fascinated and repelled by Gavo, who never ages and cannot die, Natalia’s grandfather enters a wager that may not only cost him his beloved copy of The Jungle Book but his life.

Obreht weaves the three different stories in alternating patterns throughout the book, creating a sort of disconnect that is as disorienting as the wars that have shattered the Balkan region during the 20th century. Her characters are vivid and interesting, especially the tragic butcher Luka and Darisa the Bear, a legendary hunter that comes to the grandfather’s village to kill the tiger. All of these characters are given a mythic quality, legends from a past that may or may not be true.

Obreht creates an interesting world in The Tiger’s Wife, one that is filled with gritty realism yet remains elusively folkloric. It not only examines the past during wartime but how a society emerges from an epoch filled with the unthinkable. It is a story about ritual and the bonds of family. It is quite the debut for Obreht who, at 25 years old, has crafted a book that is startlingly mature and vastly beautiful.