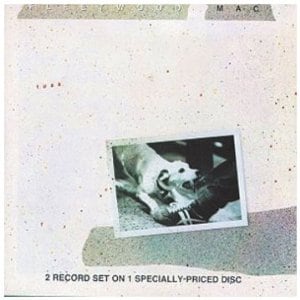 “When times go bad/ When times go rough/ Won’t you lay me down in tall grass/ And let me do my stuff,” Lindsey Buckingham pleads in the opening verse of “Second Hand News.” This song, of course, opens Rumours, and couldn’t introduce that album’s wistful hedonism and jealousy better – but it’s perhaps a more appropriate parable for the struggle and eventual artistic accomplishment surrounding Tusk, the band’s 1979 follow-up.

Tusk is difficult, disparate, 20 tracks and nearly 75 minutes long, and Rumours doesn’t hold a candle to it. Coming from the furthest corner of the deepest left field, it was one of the boldest and most overlooked albums by a band in the twilight of the classic rock era. It’s also probably the only one to successfully (and miraculously) bridge that “genre” with English folk, New Wave, rockabilly, free-verse poetry and punk. With a $1 million recording budget, it was the most expensive album of all time upon release. While this last talking point is tossed around more than any discussion of the actual music when Tusk comes up today, some context is beneficial.

Rumours, which at last count has sold somewhere around 400 billion copies, is perhaps the ultimate hallmark of rock yuppiedom – undoubtedly what The Big Chill characters were listening to before finding out that Alex slit his wrists and flipping on the ‘Nam-era pop/soul switch and all its ensuing nostalgia. It’s an overflow of emotion, a lyrical and musical conversation between band members who’d been through interpersonal hell, and a bold c’est la vie statement. While their love lives remained in remarkable flux, with notable third parties entering into the calculus (looking at you, Don Henley), the most pertinent question was how Fleetwood Mac would move on, musically, following Rumours’ atomic success. It was no secret that Buckingham was hot for the New Wave and punk sounds creeping into the mainstream sphere. But who really thought for a second that Stevie Nicks, Christine McVie and Mick Fleetwood would have anything to do with it? With the band flying higher than any other and cash pouring in almost as fast as the blow, a sprawling high-priced mess was expected.

And who was going to stop them? Who said they couldn’t and shouldn’t make a sprawling, high-priced mess? Things inside and outside of rock music were fuzzier than usual in 1979: the economy sucked, the Rolling Stones and Grateful Dead were wading in disco, music had gone handheld (to much skepticism) with the first Sony Walkman, a fiery Ted Kennedy was about to challenge incumbent President Jimmy Carter for the Democratic nomination, and Kramer vs. Kramer, a snapshot of a turbulent break-up and its ensuing tremors, dominated the Academy Awards. Division was in. So in rough times, Buckingham dug in and did his stuff. Knowing fully what kind of bizarre sonic tricks he had up his (most likely leather) sleeves, Tusk’s introduction is what could be construed as a joking wink – a textbook McVie Soft Jam. But lyrically, it’s a cold open that nakedly maps out Tusk’s frustrating indecision as a series of questions: “Could you ever need me?/ And would you know how?” and “Could it be me?/ Could it really, really be?”

Then Buckingham steps up to the plate and Tusk is underway. It’s hard to figure out where $1 million went, but I like to imagine Buckingham striking a deal with the devil to end up in possession of the meanest goddamn guitar tones ever put to tape. The formula for “The Ledge” – ‘50s bop-rock cocaine-ified with multiple extraterrestrial fuzz guitar lines – is replicated by Buckingham on fellow high-octane footstompers “That’s Enough For Me,” “I Know I’m Not Wrong,” and “Not That Funny.” In the latter, Buckingham’s uncertainty and self-doubt is funneled through the prism of a synthy pop tune. He sings, “It’s not that funny is it?/ When you don’t know what it is/ But you can’t get enough of it/ It’s not that funny is it?“, with the vocals and guitars sounding like they’re about to burst through the microphone – dark matter presented as sterling silver.

Buckingham and his paranoia get even weirder elsewhere. “That’s All For Everyone” leapfrogs from one awkward chord to another adrift in an irritating melody. Is it a good song? Not really. But the pairing of the lyrics – basically about him having had enough of this Fleetwood Mac bullshit and moving on – with these bizarre changes make for an almost meta experiment in tolerance – a musical “See what I mean?”

More successful is the title track and inexplicable first single, most famous today for its use of the USC marching band (a great indicator of where all that dough went). More questions directed outward but staring directly inward: “Why don’t you ask him if he’s going to stay?“, “Why don’t you tell me who’s on the phone?“, etc. Like the creepy younger brother of “The Chain,” “Tusk” is buoyed by a gargantuan riff and gang vocals. Onstage, it’s a beefy, climactic show-stopper; on record, it’s one of the weirdest rock songs to hit mainstream radio.

While Buckingham is the clear MVP of Tusk, McVie and Nicks are no slouches either. McVie delivers the album’s strongest ballad, “Never Make Me Cry,” a short-and-sweet taste of pop-folk with a haunting melodic rise of “Don’t worry baby” leading the chorus echoing larger than any backing arrangement ever could. “Sara” is rightfully regarded as one of Nicks’ highest accomplishments, and it’s her best contribution to Tusk. (Nicks is actually the album’s black sheep, with the rest of her songs aside from “Storms” either irritating or leaving no impression.) It’s obviously more moving when considering each member’s personal goings-on at that time, and further, in the context of the song that immediately follows it.

“What Makes You Think You’re The One” is Tusk’s most raw and daring leap, musically and lyrically. It’s a break-up song in the most urgent and vitriolic sense, with Buckingham scoffing with rage at who we must assume is Nicks. He magnificently conveys his wishes for tears, failure, and even death, his mind unraveling right there on tape, as he realizes everything has crumbled to pieces and those pieces are right there in plainview. “Every little bit is there to see/ Every little bit of you and me,” he sings as Fleetwood’s mercurial drums mimic Buckingham’s thoughts, both coming off like madmen. Fleetwood is in another dimension here, randomly bursting into double-time mid-song while the rest of the band hangs back, Buckingham’s guitar swooping up through the gaps in rhythm.

While “Sara” and “What Makes You Think You’re The One” are the early peaks in an album that’s full of them, there is fat that could’ve been trimmed: “Sisters of the Moon” is a lame rehashing of murky, minor-key ideas already explored on “Rhiannon” and “You Make Loving Fun,” and “Brown Eyes” and “Angel” are pointless, and worse, hookless. But it wouldn’t be eccentric without a few bullshit tunes that fit the storyline – and of course, even The White Album, which critics loved and still love comparing Tusk to for obvious reasons, had a handful of filler.

Like the album’s opening, Tusk has a trick ending as well. The natural choice to close out this behemoth would be “Walk a Thin Line,” a swaying and soothing rumination with a little help from George Harrison, who swoops in under the radar after one of Buckingham’s more sane and subdued verses: “I’ve seen so many things that made me wonder/ But sometimes it’s hard to tell.” The song rides out waves of “ooh,” “ahh,” pedal steel and keyboard into the sunset. But instead of a fade and “THE END,” we get “Tusk.” Then McVie returns for “Never Forget,” bringing her initial questioning full circle with another McVie Soft Jam. It is an admission that the indecision and self-awareness of “Over and Over” should be set aside just to enjoy a moment and savor the night, no matter how nonsensically fractured.

That lesson is one that should be applied to Tusk as a whole. In the rare instances the album is discussed today, it’s in the context of Fleetwood Mac’s discography – “the massive failure of a massive album” or “rock’s Hindenburg” – but never artistically. It’s a shame, because in the midst of all the mental turmoil and harrowing pressure from the press, and one another, Buckingham pushed himself and his bandmates to make an album too outlandish for anyone to try to ignore or duplicate.